Swallowed by the river

Thousands of Mishings find themselves in makeshift homes along the embankments of Majuli island. The river has destroyed more than their lands and homes. Now, their very lives are at risk. Ratna Bharali Talukdar reports.

It is the peak of the monsoon, and hundreds of erosion-affected tribal families of the Mishing tribe are languishing on embankments of Majuli river-island on the Brahmaputra in Assam, apprehending further rise in the water level of the mighty river. But Ripika Mili Payeng, the village anganwadi worker, is not afraid.

Instead, she busies herself in her daily duties, and assembles children of age group 3-6 in the pre-school premises, to ensure that they get the cooked meal provided under Integrated Child Development Scheme (ICDS) in the center. After all, this is often the only meal the children can get during the day; without it the floodwaters that have driven them from their homes might take their lives too.

"It is important to ensure that children get their food in the center, particularly during monsoon seasons, when there is dearth of work for their parents for livelihoods. To make sure, I always visit the village, asking mothers to send their children to school. When hunger looms large, such initiatives too, even if they are small, may be important," says Payeng, a mother of three, showing me the enrolment register. The cooked food provided in the center mostly includes khichri (dal and rice) with some vegetables. She has a helper, Ranju Moni Payeng, and often the president of the matrigot (mothers unit), Bharati Payeng also attends the center.

Despite her efforts to ensure total enrolment, however, only 19 of 25 students could attend the center on the day I visited; the rest were suffering from viral fever and others diseases.

Apart from the students belonging to 3-6 years age group, 14 younger children and four pregnant mothers also receive cooked meals regularly in the school. The ICDS center, says Ripika, is able to feed these targeted groups almost regularly with a regular fund flow; she has recently received Rs.6200 for the 25 students and Rs.5300 for the pregnant mothers and younger children - to meet their ration requirement for 50 days. But there are others, equally needy, who cannot get help. Like the older students; with the summer vacation on, they have missed their food too in their respective schools.

Cooked meals, provided to students up to class VIII regularly in ICDS centres and under the mid-day meal scheme in schools, may be effective interventions to address the hunger that some children face. But for the rest, uprooted from their homes, the situation is worse, with even this one source of food gone, and their families search desperately for livelihood options.

The 'village' when Ripika Mili Payeng talks about it, sounds somewhat ironic. Kaniajan, her ancestral village, existed once upon a time, but was completely eroded by several phases of annual floods and subsequent erosion in early 1990s, forcing the tribal villagers to survive on the embankments without land, property and livelihood opportunities. Thus the village itself is gone, but they have given its name to their new settlement along the embankments, hoping to retain memories of their past.

Ripika's story is similar to that of many tribal people of traditional villages - Batiamari, Chumoimari, Kaniajan, Hukonamukh, Nam Sonowal, Opholamukh, and others - who once existed on the bank of the river. The displaced people now survive either on the embankments, or on the Public Works Department's (PWD) road that connects Kamalabari and Bongaon areas of the river island, in dwelling sheds erected in rows. On these new and temporary settlements too, they try to maintain a village-like appearance, with a definite boundary.

Constant erosion has reduced the landmass of Majuli island over the years. In 1950, the island stretched over 1256 square kilometers, but by 2011, satellite imagery showed it had shrunk to less than half (520 sq km). The Mishing tribal people, one of the most colourful plains tribes in Assam, are the worst affected, as they have historically lived at the water's edge. Mishings make up one-third of the population of the river island. The life and lore of this people, who refer to themselves as noi-porias (literally, 'the riverine people') is deeply linked to the flow of the waters. 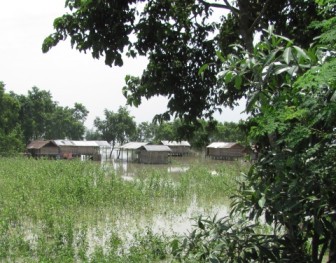 Picture: A flooded Mishing village. With crops washed out, and few livelihood options, thousands of people have been forced to live in camps along the river's embankments.

"Our ancestors, who moved to these lands from the hills of Arunachal Pradesh during ancient times, travelled by boats following downstream flows of different rivers. When they found these plain lands on the banks of rivers, they thought these areas to be useful for living because the wind of the river was pure, and these riverbank areas were free from epidemics like malaria and other waterborne diseases like cholera. They were also very fertile to grow different crops," says Manoj Kutum, the village headman of Chumoimari village, adjacent to Kaniajan. All the 210 families of Chumoimari, 1239 in all, have been living on the embankments since 1992.

Ranjit Pegu, displaced seven times due to erosion, owns the Fair Price Shop in Chumoimari. He is bitter from his experience of carrying goods under different schemes of the Public Distribution System. The PDS, he says, has no meaning for the poor, even if it has been distributed regularly.

"For instance, I pay Rs.3330 extra charges for 93 quintals of allotted rice, to carry it from the FCI godown to Neematighat. The carrying charge in the ferry from Neematigaht to Chumoimarighat is Rs.35 for per quintal. The charge for carrying it from the local ghat to my ration shop is Rs.20 per quintal. As government never reimburses this additional money of carrying charges, we collect it from the card-holders adding some extra charge, although it is a wrong practice," he says, admitting his own part in compounding the woes of the village.

Apart from rice he is also allotted four quintals of sugar and 1120 liters of kerosene a month, and these too must be carried. Altogether 52 families of the village have Below Poverty Line (BPL) cards, and 32 others have Antodyaya Anna Yojna cards. Additionally, 108 families has Mukhyamantrir Anna Suraksha Yojna cards, which entitle them to rations under a state government scheme - 20 kgs of rice at Rs.6 per kg. But this is very irregular, says Pegu.

Most of the families cannot purchase their allotted rice at a time, as they simply do not have the money all at once. All these, actually has made the entire PDS system a farce, says an irritated Pegu, a college graduate. 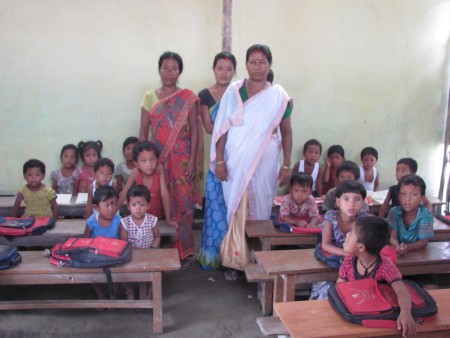 Picture: The school is not just a place to learn. It is also the only place where the children can get a square meal.

According to statistics tabled on the floor of the Assam Legislative Assambly in July, there are 12 habitations on both embankments and PWD roads where these displaced families live. Of these, Mishing tribals live in at least 10, ranging from only 40 families on the Malual-Bodoti PWD road, to 580 families on the Ophola-Chumoimari embankment.

Constant erosion has turned these tribal people, known for their expertise in wet paddy cultivation and for raising winter crops including mustard seeds, garlic, and onion, into mere share-croppers and daily wage earners. They get an equal share of the share-crop agriculture when land-owners provide them the seed, and two-thirds of the crop when they themselves procure the seeds. But share-cropping itself has become unproductive, without any agricultural mechanisation, and the annual floods and inundation have made the situation worse and always uncertain. This year the entire crop of the island has been lost, as floods hit in several phases, even in September.

The alternative daily wage jobs are always far fewer than those seeking them. Mishing women are known for their expertise in weaving, and try to set their handlooms under the raised bamboo platforms of their dwelling-houses (known as chang ghar) even on the embankments, to find some earning through weaving to help their families. Also, they work as agricultural labourers during crop seasons and earn between Rs.80 and 100 a day. Livestock, that include piggery, goat-rearing and poultry too, add a little to their tiny incomes. All these efforts, however, are too little to arrange a square meal for their families.

Interestingly, most of these tribal families, despite losing their traditional lands to the river, still used to pay the annual land revenue tax, and also got their certificates of land from the revenue department. They do this hoping that one day they might get back their ancestral lands if, or when, the river changes its course!

"You see, no one can predict on the wish of the mighty Brahmaputra. This is mostly an unstable river. One day he (the river) may wish to give us back our ancestral land and go away from here. With this hope, we are still paying our land tax to the department. Without a river, it is hard to survive," says the village headman.

Ratna Bharali Talukdar is a freelance journalist based in Guwahati, Assam. She received the Chameli Devi Jain Award for Outstanding Women Media Person and the Ramnath Goenka Excellence in Journalism Award in 2005 and 2006 respectively. This article has been generated under the media fellowship offered by The Akshaya Patra-OneWorld Media Fellowships on Hunger, 2012.

PARTICIPATORY PLANNING : The people and their plans
MORE ARTICLES
on similar topics ...
ASSAM