The theatre of hope

If the government thought Vidarbha's social bonds are crumbling due to the agrarian crisis, the region's best kept cultural secret -- Jhadipatti Rangbhoomi, a five-month-long theatre festival -- suggests that not all is wrong with the region. Jaideep Hardikar reports.
21 November 2006 -

Gondia & Bhandara: It's pitch dark, and the dilapidated road leading into Maregaon, a non-descript village in the forests of Bhandara, bears no sign of any human activity, until you finally enter the slender alley that opens up into the village's common ground. At 10 pm, Maregaon is not just awake; it's having a party. And nearly a dozen other neighbouring villages have gathered for what appears like a grand fair. For cantankerous vendors at food and tea stalls, it's business time in the dark hour.

For one show, the company gets a minimum booking amount of Rs.30,000 from the local village mandal.

The mandal in turn earns almost double the booking sum from the sale of tickets priced between Rs.10 and Rs.40.

The noise is deafening. Loud speakers are tucked into the branches of a couple of huge banyan trees, against the backdrop of the central tent-turned-auditorium. The accentuated sound reverberates in the air, mixing with the fair's petulant noise.

The huge tent, which has a seating capacity for 10,000 people, is illuminated with a series of halogen bulbs. On the stage, a couple of volunteers check curtains and test mikes. "Phu phu, halo halo." Backstage, artistes colour their faces in the light of the only bulb that hangs from a bamboo of the shamiyana. Musician and sound-recorder, sitting opposite the stage, briskly check the connections.

In one corner, the tentwahlas, unperturbed by the noise, are fast asleep. By 11 pm, it's all choc-a-block with men and women of all ages. Whistling begins.

A film-like poster pasted on a wall displays the ad. Maregaon is holding the show of a Jhadipatti drama tonight. And people from far-off villages are here for it. (Jhadipatti in Vidarbha's Marathi dialect means forest culture.)

Forget any Shakespearean magnum opus or a 'Waiting for the Godot' at the Prithvi theatre in Juhu, Mumbai. This one is Vidarbha's best kept cultural secret: Jhadipatti Rangbhoomi. And if you thought what's in it, think again  mainstream artistes turn down offers in Mumbai and Pune to take part in this indigenous informal festival, and walk away with pockets-full at the end of the five-month season in April.

Remarks Devendra Dodke, a theatre and TV artist: "Jhadipatti is like a rough road. If you drive here, you can drive on any road. If you can impress audience here, there are little chances that you would fail on any other stage in the world." Far from the limelight, artistes like Devendra travel in villages of eastern Vidarbha hinterland to make money, at times turning down offers from the mainstream.

Says Shekhar Patel, director and lead actor of several plays here: "We hold no rehearsals. Scripts are given to the artistes an hour before the play, and in two to three shows, we set the drama. So much of our performances are extempore." The role of the prompters is therefore crucial, explains Shekhar, who grew up in this theatre-culture and is now one of the most acclaimed artists of this world. He says there is no parallel to the Jhadipatti stage in the world.

Jhadipatti theatre culture is more than a century and a half old, and it's now cemented in the living traditions of the people. Nearly 3000 villages in the four districts  Gadchiroli, Chandrapur, Gondia and Bhandara  have drama mandals which rope in hundreds of village families in this season for social exchanges.

If the government thought Vidarbha's social bonds are crumbling due to the agrarian crisis, this festivity suggests that not all is wrong with the region. As Maregaon's elders say: This is not just the occasion for entertainment, but also social exchange. "We get to come together after slogging in the fields. For the prospective brides and grooms, their search for partners ends in this season." Maregaon itself has not reported any suicides till date, but figures for the Vidarbha region crossed 500 since the Prime Minister visited on 1 July.

Its economics and scale are mind-boggling. Roughly 3000 shows of nearly 150 plays are staged in five months, starting November every year. For one show, the company gets a minimum booking amount of Rs.30,000 from the local village mandal. The mandal in turn earns almost double the booking sum from the sale of tickets priced between Rs.10 and Rs.40. The total business of all the companies put together for a season runs up to Rs.10 crore, without any aid from government or private sector. The rural people pool in their money.

Tens of playwrights from this soil pen the family dramas, taking themes from the current social problems and trends, to deliver a message in the end.

Take, for instance, the Marathi play titled Election mhanje songat song, jikde tikde bomba, bomb (Election's a farce). The play brings to fore the village politics and comments on private money-lenders' menace in the villages  a subject central to the current crisis. The play, staged by a group in Dhanla village of Nagpur district, is penned by Raju Tirpude and directed by Jaidev Patre, both seasoned Jhadipatti performers. The central theme revolves around two families of a village  one of a moneylender and the other of the village's respected personality. 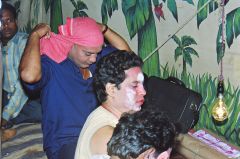 While the theme portrays the struggle between the two for the village panchayat's control, it revolves around the latter's son who is a social worker, disinterested in village politics but forced to contest election by his ambitious father. His rival is the son of moneylender, a goon who's hated by one and all in the village, especially the women. The social worker's fiancee gives that melodramatic element to the drama that punctuates the Jhadipatti theatre culture. The goon's desperation for both the chair and the girl ends with his defeat. The police arrest him for hatching a conspiracy to kill the social worker through a henchman. The protagonist social worker clears the debt of his would-be-father-in-law by paying Rs.20,000 to the moneylender and calls the village to adopt a farming model that is cost-effective, one that does not require the naïve villagers to borrow from the unscrupulous lenders.

The play, which is doing the rounds in Jhadipatti this year, is an instant hit, since it brings to the audience, mostly the peasants, a subject of importance in relevant times. It shows the decadence in both, the agrarian economy and village politics. Local performers are enacting the characters. The play has seven actors and runs into three acts. The play lasts around four hours including the two intervals.

Says Durvas Kapgate, proprietor of 'Jhadipatti Marathi Rangbhoomi' at Wadsa (Desaiganj) in Gadchiroli district: "There is no guarantee that good theatre artists will survive on this stage. The dynamics of this theatre is quite different." Durvas camps in Mumbai, Pune, Nagpur and other major cities for months to search for new talents, fresh faces for the ensuing seasons. "Our company bears the cost of their travel, stay and other contingencies, besides their per-show honorarium. From a minimum of Rs.500, it can go up to Rs. 5,000 a show."

Villagers like to see simple Marathi family dramas that don't burden the mind. Human relations, tragedy, humour, each of these plays portrays all the moods.

There's no room for any obscenity, but double-meaning dialogues are in-thing. Each play runs into about five hours, and ends up usually in the wee hours. That is when the caravan moves to the next stop, while the labourers unwind tents. Two to three teams of contractors work in tandem with each drama company.

Jhadipatti theatre gives work to tens of youths: from playwrights to artists to musicians and even tea-stall vendors. "Each company hires labourers for erecting pandals and making arrangements, sets up printing press for advertisement campaigns, so there's a lot of income generation activity in these months," says Durvas.

Jhadipatti has withstood the onslaught of external influence. Contrarily, it has evolved stronger, with the advent of sound and light technology. "You may not be great at stagecraft, but you'd still make waves if you are know a bit of all  acting, dancing and singing," says Prakash Lanje, a lecturer at a junior college in a Bhandara village. He doubles up as a manager of a drama group.

Purushottam Durugkar, a 36-year-old farmer who is the president of Maregaon drama society, says 40 members of the mandal chose the play from a list of 12. "We've been holding our own shows at village-level. This is our first time with the professionals." "Thankfully", he quips, "we've recovered our money."