Why Bihar’s child is different from Himachal’s

The Integrated Child Development Services scheme was launched to address the nutrition, health and learning needs of all children below six years of age. Ankita Aggarwal shares findings from a survey that point to the huge variations in implementation and effectiveness.
08 April 2014 -

Many children in rural India get their first taste of life outside the familiarity of their homes in the local anganwadi (child care centre). It is here that these children learn to sit, play and eat with other kids of their age and follow instructions of the anganwadi worker and helper. On lucky days, they get an egg with their midday meal at the anganwadi, and learn songs together.

Anganwadis form the backbone of the Integrated Child Development Services (ICDS) scheme, India’s effort to address the nutrition, health and learning needs of children below six years of age. Children usually get “take-home ration” until the age of three years, and after that, hot cooked meals. They are immunised at appropriate ages, and weighed regularly to ensure that there is no faltering of growth.

Children undergo a routine health check, and those found to be sick or undernourished are referred to the local Primary Health Centre. Since the good health of mothers is essential for children’s wellbeing and important in its own right, the ICDS also provides nutrition and health services for women in the reproductive age group, such as food supplements during pregnancy and other forms of antenatal care.

That, at any rate, is how things are supposed to work. The ground realities vary a great deal from state to state, as we found out in May-June 2013 during the Public Evaluation of Entitlement Programmes (PEEP), a field survey initiated by the Indian Institute of Technology, Delhi. The survey covered two of the poorest districts in ten different states.

The ICDS programme has come a long way since it began in 1975. In places where people had not even heard of the ICDS ten or fifteen years ago, it is now possible to see functional anganwadis, regular immunisation of infants whose parents suffered from preventable diseases such as polio and measles, and young children learning the alphabet for the first time in their communities.

Much of this was made possible by Supreme Court orders on the ICDS, which require every habitation to have a functional anganwadi. The orders also direct state governments to ensure that all children under six benefit from ICDS services encompassing nutrition, health and pre-school education. 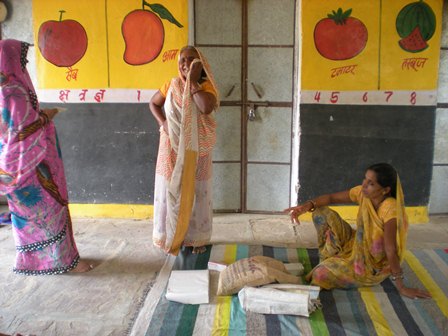 There is still a long way to go before we can claim that all Indian children are well looked after. India’s immunisation rates are among the lowest in the world, and more than 40 per cent of children below the age of five years are underweight. Their mothers are not doing too well either. According to the latest National Family Health Survey, more than a third of all Indian women aged between 15 to 45 years are underweight and more than half of them are anaemic.

The differing ‘states’ of the ICDS

Even as I write this, I get a call from Sugiya, an ASHA (Accredited Social Health Activist) working in the Khunti district of Jharkhand. She tells me that a pregnant woman from her village was bleeding profusely and needed blood transfusion. On reaching the hospital, we find out that the woman had developed a ruptured uterus and the child didn’t survive. Using my very limited knowledge of antenatal care, I asked Sugiya whether the woman had received iron tablets from the anganwadi during her pregnancy. She said that iron tablets had not been supplied anywhere in her block for about a year!

Jharkhand, one of India’s poorest states, is also one of the worst performers as far as the ICDS is concerned. Many hamlets don’t even have an anganwadi. Of the eight villages visited by the PEEP Survey team in Jharkhand, only two had a regularly functioning anganwadi. Most anganwadis were located in dilapidated buildings. Many anganwadi workers performed their duties from home.

There were also complaints of women or children not getting the entire food supplements that they are supposed to receive. The situation was worst in Dhundhapahadi village of Dumka district, where people reported that children never get cooked meals and that the anganwadi opens only once a month to distribute take-home ration.

Anganwadis also left much to be desired in Bihar, Uttar Pradesh and Madhya Pradesh - states which generally have a bad record of providing basic services. In Bihar, several anganwadis did not even have their own building and were functioning from rented spaces, often used for storage or other purposes as well. Without charts or toys, most anganwadis there looked dull; hardly a place where small children would like to go.

Though children are supposed to get a variety of meals at the anganwadi over the week, they seldom get anything other than khichdi (rice cooked with lentils). The midday meal at the anganwadis is an excellent opportunity to teach children of different communities to eat together, but unfortunately, some anganwadis in Bihar enrol children of only a particular caste.

Bloated bellies and sandy hair - classic signs of undernutrition among children – give away the poor quality of nutrition and health services at these anganwadis. Children are also not learning much: about half the families interviewed in Bihar said that no regular teaching takes place at the local anganwadi. 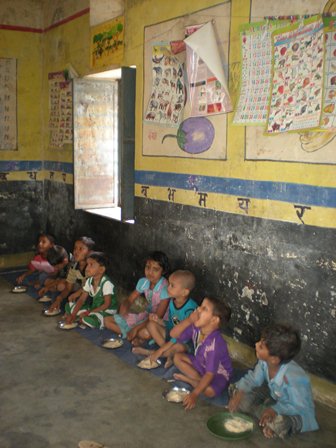 As in Bihar, most anganwadis in Uttar Pradesh did not have their own building and had bare walls. Most anganwadi workers met by the survey team had little knowledge of child care. Weighing scales were missing. Children were given panjiri (a bland mixture of flour, sugar and fat), but because of its poor quality, most of it was fed to the cattle.

Some of these problems arise because funds do not reach anganwadi workers in time; delays often extend up to three months. This irregularity was also found in Madhya Pradesh, where it resulted in erratic supply of food. Only a part of the money allotted for ICDS actually gets spent on food, medicines, learning equipment and so on, and the rest finds its way to the pockets of various functionaries.

The problem with ICDS funds start from the programme’s budget, which is a pittance. Anganwadi workers get less than the minimum wage, but are required to work as hard as government school teachers, who are paid about ten times more! In Tamilnadu, anganwadi workers complained that they are required to maintain 20 registers. There has been a long standing demand to increase the pay of these workers and double their strength in each anganwadi.

Tamilnadu’s anganwadi workers may not be a very happy lot, but the state’s children definitely have reason for cheer. They get an egg every day in their meal, and learn in colourfully painted buildings. Well-functioning anganwadis were also found in most villages of Himachal Pradesh and Odisha and in many villages of Chhattisgarh, Maharashtra and Rajasthan.

As mentioned by Reetika Khera in her article Do Government Schemes Ever Work in India? ICDS has begun to flourish in Odisha only in the last few years. Children are given food twice a day – once at 9 am and again three hours later. In between the meals, children play games, are told stories and taught lessons. The anganwadi workers, helpers and children can be spotted from afar by their uniforms.

In Rajasthan, most anganwadi workers we spoke with reported several positive changes that have taken place in respect of ICDS over the last five years. Infrastructure has improved, salaries are higher and anganwadi workers receive better training. Parents are now more aware about the importance of sending their children to the anganwadi and take greater interest in the programme’s activities. Systems of inspection and monitoring have also improved.

The survey findings in Maharashtra show that even within a state there can be major variations in the functioning of ICDS. In Nandurbar district, the team found only one anganwadi that was open and well-stocked. But in Osmanabad district, children were present in most anganwadis, although they got little more than food. These anganwadis were often run by the helpers, as the workers didn’t consider it worth their time to come to the centre. Interestingly, despite the paltry honorarium given to the anganwadi workers and helpers, their positions were highly coveted and captured by the wives of the local elite.

Nothing prevents any state – or even a village - from transforming the lives of its children through the ICDS. Parents and other family members of children can help the anganwadi workers with their myriad tasks. They can regularly hold village meetings to discuss the functioning of the local anganwadi and convey any problems to the anganwadi worker or other ICDS functionaries.

Students and other researchers can investigate ground realities, write about them in magazines or blogs, and even advocate policy changes before legislators or administrators. Similarly, journalists can report irregularities in mainstream media and help to make politicians and bureaucrats more accountable for the performance of ICDS. People can also protest through creative and tactful demonstrations to demand a better deal for the little ones.

In short, anyone who is concerned about the plight of Indian children has reasons and opportunities to get involved in efforts to improve ICDS.

Anganwadis for All: A Primer (Delhi: Secretariat of the Right to Food Campaign)

CHANGEMAKERS : A fuller picture of ourselves
MORE ARTICLES
on similar topics ...
CHILD HEALTH