The right to water: long road ahead

Judging by the 16 years it took for the right to education to be legislated, the right to water and sanitation is a long way off. But there is much to be learned from the efforts of NGOs, meanwhile. Darryl D'Monte reports.
12 August 2009 -

Barely a couple of days after the Lok Sabha passed the Right to Education bill on August 3, a number of officials, experts and activists met in Delhi to discuss another basic human right - to water and sanitation. The meeting was called by the Freshwater Action Network (FANSA) in South Asia, Forum for Policy Dialogue on Water Conflicts in India , Bread for the World, WaterAid India and the India WASH Forum.

Shantanu Consul, who was appointed Secretary of the Department of Drinking Water Supply in the Rural Development Ministry a few months ago, was present. His attendance, and that of his senior colleagues, was duly noted by activists who had fought for the right to education and health, who remarked that it was a welcome departure from the indifference they had faced from the bureaucracy during the course of their prolonged struggles.

Consul noted that there were some problems in relation to the right to water. For one thing, water is in the state list - not the concurrent list, as in the case of education - and it is therefore difficult to enact such a law and guarantee that it will be implemented in letter and spirit across the country. Secondly, in rural areas, it will have to be delivered by panchayati raj institutions, which may not have adequate funds to do so. Thirdly, over what period will the right be delivered? Should the state works towards a gradual realisation of the right, rather than legislate it overnight? Lastly, the water supply also had to be sufficient, clean, accessible and sustainable.

Three countries - South Africa, Uruguay and Morocco - have introduced laws guaranteeing rights to water and sanitation. In South Africa, the basic minimum which households are entitled to is 6000 litres per month, or 200 litres a day, or about 50 litres per head, free of charge. However, as with many well-intentioned laws, this has been a mixed blessing. As a condition for getting 6000 litres a month, households had to have meters installed. After some poor families couldn't pay their bills when they exceeded this amount, their supply was cut off. Activists cite epidemics of cholera in that country being triggered off by such action. 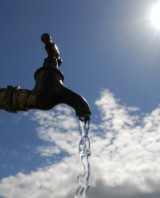 Three countries - South Africa, Uruguay and Morocco - have introduced laws guaranteeing rights to water and sanitation. In South Africa, the basic minimum which households are entitled to is 6000 litres per month.

At the meeting, there was considerable discussion on the basics. Does the right refer to 'drinking' water, which is easier to legislate than water as a whole, the bulk of which constitutes irrigation? The former would dovetail with the UN Millennium Development Goals, which seeks to halve those without access to drinking water - some 1.2 billion in the world - by 2015. Sanitation needs are roughly double this absolute number and though India claims 60 per cent coverage, there is almost certainly a huge gap between toilets installed and those which are still functioning, not least due to a shortage of water.

Poor solutions for the poor

At a consultation of the India WASH Forum two days earlier, FANSA cited how there were 55 lakh toilets installed between 2001 and 2008, of which over half were unusable today. There was a subsidy of Rs.2750 on the cost of Rs.5000, which was paid in three installments. As Joe Madiath, who runs Gram Vikas in Orissa which has won considerable acclaim for its achievements in galvanising communities to build their own toilets remarked, sanitation "is not only about the disposal of human waste, but a question of dignity". He advocated reengineering the entire approach, which experts term a preoccupation with "taps and toilets". In other words, more than the hardware, when it comes to the right to sanitation, it is a question of the "software", of convincing communities to demand this amenity, rather than prompt the state to supply this.

He questioned why poor people were offered poor solutions. Did three cement rings with a hole in the centre constitute a household latrine? Was the cheapest the most economical? Instead, the rural poor had to be presented a dignified solution, which was comparable to that enjoyed by their urban counterparts. The word 'subsidy' had bad connotations, so he preferred the use of the term 'incentives', which could ensure that a village could be fully covered. Every landless labourer could be taught basic masonry to construct a toilet on a scientific basis, which included bathing facilities. The only external inputs would be cement, steel, a toilet pan and door.

As speaker after speaker pointed out at the consultation, sanitation was inextricably linked to the provision of water, which is why the right refers to both of these most basic human needs. Where water flowed, there wasn't a single instance of a toilet not being used. NGOs from all over the country advocated using renewable sources as much as possible, as Bunker Roy has done in his Barefoot College in Tilonia, Rajasthan. There were also cases of community monitoring to put an end to open defecation, including the involvement of children who climb trees to report on offenders, who are fined. Families which didn't maintain clean toilets were also fined, and children who cleaned these were rewarded with a feast every month, funded by the fines.

Judging by the 16 years it took for the right to education to be legislated, the right to water and sanitation has a long road ahead. But there is much to be learned from the untiring efforts of NGOs in the meanwhile. Some of these are that the provision of sanitation is more of a change in mindset, than the lack of funds to build toilets. Experts frequently cite the case of a well-to-do farmer in Haryana who reported, very proudly, how he takes his entire family out every morning in his Maruti to the fields to perform their morning ablutions! Speakers also referred to how older generations found it difficult to change their habits, even after a toilet was installed in the house.

A second learning was that the right to sanitation refers more to dignity and privacy than health, since the latter nexus isn't easily perceived, however deadly. As a corollary, it is women who face the brunt of poor sanitation to a much greater extent and even in states like Haryana, which has the lowest sex ratio in the country, have often taken the lead in getting toilets installed in their homes. It is for exactly the same reason that in Midnapore in West Bengal, which has achieved some of the biggest successes in sanitation coverage, surveyors were surprised to find that neighbouring districts weren't following suit because only the men had travelled to spread the message, which had obviously not gone home.

Understanding the right to water

There are customary rights to water, as in the Philippines. However, there have been some departures. For instance, the North American Free Trade Agreement (NAFTA) specifically refers to how water in its natural state is a tradeable commodity. When the California-based Sun Belt Corporation sought to transport water from British Columbia in Canada to Saudi Arabia, citizens in the exporting country protested and stopped it. As education and health activists, who spoke at the right to water meeting mentioned, it was the duty of the state to keep the market at bay and prevent it from being commoditised.

K J Joy from Pune observed that the right to water should be distinct from water rights, a concept propagated by the World Bank and other neo-liberal forces. Typically, the latter refers to the policy whereby farmers can sell their water rights in preference to cultivating their fields, which is questionable. The scope of the right encompassed quantity, quality, access and affordability. As far as duties and responsibilities were concerned, this right would be justiciable and it was the state's responsibility to provide every family with a minimum amount.

There was also the issue of the ownership of the delivery mechanism: whether it would be in the hands of the state or community or both, as well as the pricing. Traditionally, surface water has been a public good, although in reality 'privatised' by big landowners with pumps. Groundwater, on which the majority of people in villages depend, on the other hand, has been treated as private property. The pricing of water would prove a tricky question, depending on whether it was treated as a social or economic good.

When it comes to quantitative rights, there are different cultural and ecological factors at work. Thus, while one may be guaranteed a minimum, how would this amount differ from a state like Kerala, with heavy rainfall, and parched Rajasthan? And what does the minimum include: drinking, cooking, hygiene needs?

Some activists have in fact called for a much broader right to water security, which is far more all-encompassing and will be that much more difficult for the state to grant. It would call into question, for example, the current practice of supplying water to towns and cities at the expense of rural areas. Speakers referred to how there are lined canals taking water to Bangalore, while villages along the way are denied their supply. The recognition of water security rights, then, could place limits on inter-basin transfers of water -- the state has still not given up the disastrous plan to link rivers - and try to ensure that water remains within its ecological boundaries.

At any rate, as accounts of the protracted struggles waged by activists make clear, there will be a long and arduous campaign ahead before the right to water and sanitation is conceded by the state. But at least a beginning has been made, and will be followed up on with a draft bill in the months to come.