AGRICULTURE / NOT READY YET

The Ministry of Agriculture moves to introduce adoption of genetically modified crops in India, in the name of food security. Scientists, however, are critical of this move. Neha Saigal reports.
26 February 2013 -

Three years ago, the then Minister of Environment and Forests, Jairam Ramesh declared a moratorium on Bt Brinjal, adopting a precautionary approach to the introduction of genetically modified foods in India. More importantly, he cited among his reasons for the moratorium the need to be "responsive to society and responsible to science."

The decision to impose a moratorium was an important one in many ways. It re-instated the growing evidence by the scientific community on the health and environmental impacts of Genetically Modified (GM) crops, and - perhaps even more importantly - the inadequacies in our own regulatory mechanism to regulate this controversial technology. The most valued lesson from this milestone decision was the coming together of sound science and public opinion, which resulted in democratic decision making.

This year, to mark the importance of 9 February (the date on which the moratorium was issued in 2010), diverse groups from around the country celebrated 'National Safe Food Day.' A variety of events from different states around the country displayed the strength and diversity of the opposition to GM crops in India. From the organic mela organised by farmers in Karnataka, to the initiative by young people in Kerala to spread awareness about the risks of switching to GM crops, and a rally of 300 people in Gujarat, the day saw strong voices of opposition to GM crops echo throughout the country.

In Bangalore, Greenpeace volunteers created the image of happy brinjals walking down a traffic signal, imitating the famous Beatle's Abbey Road album cover. The message that these smiling brinjals carried was one of hope - that the people of India can imagine a GM-Free future due to the moratorium on Bt Brinjal and can only hope that the current Minister of Environment, Jayanthi Natrajan will also uphold the precedent set by Jairam Ramesh. 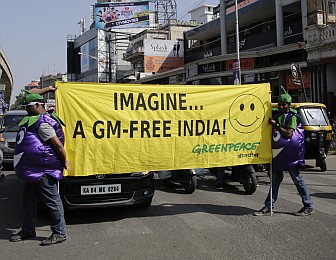 The most valued lesson from the moratorium decision was the coming together of sound science and public opinion, which resulted in democratic decision making. (Pic: Greenpeace volunteers mark National Safe Food Day in Bangalore).

While the debate around GM crops in India has always shown the voices of dissent from civil society, the past few months have also established that science is divided on the need for and the safety of GM crops. One recent example was the scientific interim report by the Technical Expert Committee (TEC) of the Supreme Court in October 2012. The report highlighted the potential impact of GM crops on human health, biodiversity and our socio-economic conditions, and has recommended a precautionary approach towards the adoption of GM crops, including those being released for open field trials.

The Government, however, has decided to ignore this warning. The Ministry of Agriculture, on behalf of the Government of India, has filed an affidavit to the effect that we need GM crops in order to achieve food security in this country. This is the same argument that is used by global biotech companies to promote GM crops. This is also an argument made very casually and loosely - exactly what food security the government seeks, while it has no capacity for storing and transporting the produce that is already grown, is never spelled out properly.

It is very absurd that the MoA, under Minister Sharad Pawar, seeks to lead the country down the path of GM crops while scientists from around the nation have roundly criticised the illogic of GM crops being linked to food security.

While civil society celebrated the moratorium on BT Brinjal on 9 February, a letter addressed to Jayanthi Natrajan, signed by 150 scientists, was made public. The letter highlights that GM crops are only grown in 3 per cent of the world's agricultural lands, and in countries like the USA, which is the largest cultivator of GM crops, food insecurity has actually increased. The scientists finally urge the MoEF to come forward to accept the recommendations of the TEC, so that the MoA does not misdirect the debate on GM crops and food security in the country.

The sounds and colours of the celebrations of the National Safe Food Day have a serious message for our decision makers. There has been enough and more evidence in the last year pointing to the inefficiency in our regulatory system and the risk to human/animal health and biodiversity. This was also emphasised in the report by the Parliamentary Standing Committee on Agriculture, which was tabled in August 2012; its recommendations were unanimously agreed across party lines.

What further evidence does the Government need? If the MoEF is not going to act on the recommendations of the Committee, it must explain to the public why not. For the moment, the problem appears to be that the only 'explanations' it can offer don't find favour with the scientific community. Such deliberate ignorance of informed input only adds fuel to the fire of suspicion that the Government's actions reflect the agenda of vested interests in corporate agriculture, rather than the public interest.

Neha Saigal is with Greenpeace India.