The Annual Status of Education Report, 2009 points out yet again that what stands between rural girls and a good education is often basic facilities like transport and proper toilets, writes Kalpana Sharma.
14 February 2010 -

Swati and Anita are two young women from rural Maharashtra. They have one thing in common. Both dropped out of school once they completed Standard VIII. They wanted to complete their schooling. Both spoke passionately to me when I met them about their desire to study. Even their parents wanted them to study further. But circumstances would not permit this.

Both girls faced an identical dilemma. While the school up to Standard VIII was in their village or close by, the high school was some distance away. The only way to go there was by the local State Transport bus. While going to school was not such a problem as it was during the day, at the end of the school day, they had to wait several hours before they could catch the bus back. If for some reason the bus was cancelled, and this would happen with alarming frequency, they would have had to walk back to the village in the dark, something their parents would not contemplate. Hence, the only option was to drop out of school.

In contrast, the brother of one of the girls faced no such problem. As soon as he was through with his classes, he would hitch a ride on a passing truck and make his way back. This was not an option open to the girls.

What is tragic is that both these girls are as bright as any you would meet in a city like Mumbai. The only reason they will not become the engineers and doctors of the future is because there is no reliable transport linking their village to the nearest school. And theirs are not remote villages in the interior of Maharashtra. Swati lives a mere hour away from Pune. If this is the story of Swati and Anita, think how many millions more like them must be chafing at being deprived for no other reason than a safe mode of transport. 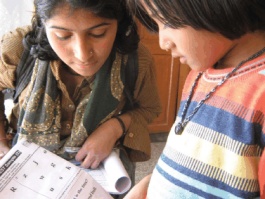 We also know that many more girls drop out even before Standard VIII for another reason: the lack of toilets in schools. The latest ASER (Annual Status of Education Report) 2009, a comprehensive survey of government and private schools in 575 out of 583 rural districts in India, revealed that only 50 per cent of government schools have toilets and that four out of 10 government schools did not have separate toilets for girls. Even where there were separate toilets for girls, as many as 12-15 per cent were locked and only 30-40 per cent were "usable". I visited a school in Bihar where toilets had been constructed but within days their doors had been stolen and the toilet pans smashed making them unusable.

If girls dropout when they reach adolescence, it is often for no other reason than the lack of toilet facilities. Even in a city like Mumbai, the dropout rate amongst girls attending municipal schools is markedly higher than that of boys because of the absence of toilets for them.

The annual ASER study, facilitated by the NGO Pratham, is a constant and important reminder of the state of education in this country. In 2009, ASER surveyed 16,000 villages, 300,000 households and 700,000 children. There is nothing on this scale done by an agency outside government, hence its importance. But each year, when ASER results are made public, we are reminded that education is not just about quantity, or the number of children who enrol in school - a number that is increasing - but the quality of the education these children get. And that, although it is getting better in some states, is still shockingly poor.

Conducting simple reading and mathematics tests in schools, the survey reveals that a little over half of all children in Standard V in government schools cannot read a Standard II text book. This means a 10-year-old cannot read what a seven-year-old is supposed to be able to read. What then are these children learning even if they become a statistic showing increased enrolment and attendance in schools?

Precious little, it would seem. What they cannot learn in school, they do so by paying for private tuitions. One of the more disturbing statistics in the survey reveals that one in four children in Standard I in private schools is sent for private tuitions as are 17 per cent of Standard I students in government schools. Can you imagine that? Little six-year-olds being sent for private tuition. By the time they reach Standard VIII, over one third try and learn what they are clearly not taught in school through private tutoring. An analysis of the budget of poor people would reveal what a chunk of their earnings goes into such tuitions because they hold on to the belief that education will pull them out of poverty. But given the poor quality of education in these schools, their children will never be able to compete with those with ability to pay for better quality schooling.

Fortunately, not the entire ASER report is gloom and doom. One of the brighter moments in it is the fact that in Bihar, the state considered a basket case on most counts, the dropout rate for girls in the 11-14 age group has reduced from 17.6 per cent in 2006 to 6 per cent in 2009. So Bihar must be doing something right. In fact, one of the striking sights in Bihar today is of girls on bicycles, given by the government if they clear Standard VIII, going to the nearest high school.

The desire to ensure that children get a good education runs deep in most Indian families. Parents will sacrifice and save to invest in their children's future. Even poor families, including the homeless with no secure shelter, find a way of sending their children to school. The increase in the enrolment rate in India - 96 per cent of children between the ages of 6-14 are enrolled in school, government and private - is proof of that.

What urgently needs to be tackled is the quality of education, basic facilities like toilets and running water, and transport, particularly for girls. Even this will not suffice unless there is a notable change in the status accorded teachers who ultimately decide whether and what children learn. Instead of the inordinate amount of attention that continues to be paid to institutes of higher learning, or private institutions that promise to prepare rich children for studies abroad, something much more simple and basic can and needs to be done to educate India and Indians.

CHANGEMAKERS : A fuller picture of ourselves
MORE ARTICLES
on similar topics ...
GIRLS' EDUCATION