Aanand Chabukswar vividly remembers the day Appa spoke. It was the end of a drama therapy session, and after the closing meditation ritual, Aanand asked the other members if they had anything to say. Appa got up and proclaimed, I am Appa speaking. After a stunned silence, everyone broke out in applause. And why wouldnt they? Appa, a mentally challenged adult in his late forties, had not spoken anything beyond a yes and no for years. Drama therapy interventions helped him break that long silence, and thereon, he has been expressing himself through physical gestures as well as words.

Appa's dramatic change illustrates the success of drama therapy, a creative method being employed in the healing of special populations by the Pune-based World Centre for Creative Learning Foundation (WCCLF), registered in 2001. The group, spearheaded by drama therapist Aanand Chabukswar, drum circle facilitator Zubin Balsara, and Asha Pillai, believes that art originally emerged as a form of healing, growth and change. However, over the years, institutionally as well as socially, other therapeutic methods gathered prominence over arts-based interventions. Today, the potential of various art forms in psychotherapy for special groups is not widely known, and the team of artistes, teachers and facilitators at WCCLF is working to revive this form of therapy. 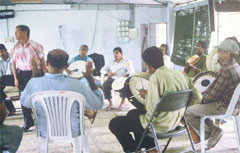 The key premise on which this therapy rests is that creative art is a force that has the power to heal. Through its components of body awareness, modeling, role play, rhythm, and movement, it empowers the individual to communicate via means other than verbal expression. "We specifically use music, drum circles, drama and dance movement in our methodology," explains Aanand Chabukswar, who trained in drama therapy techniques at the Rowan studio, UK, a pioneering institute in the field. "Our target groups are special populations - mentally challenged adults, drug addicts, children with learning disabilities, autism or other physical/cognitive challenges, underprivileged children and institutions working for mental health and social development," he explains.

These drama therapists are confident that their art can help unlock memories, emotions, and behaviours that some individuals are unable to express through words because of fears, inhibitions or complexes. Some others, especially those who are physically challenged, may just be incapable of verbal expression. Such individuals experience a freedom with body movement or musical rhythm, enabling them to "voice" their reactions, emotions, experiences, and also to explore their own potential.

For those who find it difficult to talk, a story circle is safe space to listen or to act out. Dramatizing provides an active way to get rid of negative energy and issues.

Drama therapy works with both individuals and groups. It assumes that people are intrinsically "dramatic" in their development. Dance used as therapy is powerful enough to release blocked feelings, explore group dynamics and inter-personal relationships, and help in relaxation. A drum circle is a community music-making exercise wherein participants play percussion instruments in a group. It enables the individual to use the group as a support system and the individual can develop a sense of self-esteem.

Zubin Balsara adds some insights about drum circles, a relatively new form of music therapy. He says, "We use drumming in an institutional environment, and it really helps these special people to get in touch with themselves. Drumming is very instinctive, and has responses at various levels. At the physiological level, people have reported a feeling of being energized, fewer tremors in hand movement and better gait (in those with Parkinson's). You bypass the mind in the drumming process that has more to do with the body and the spirit, and hence people feel stress-free. And it works as a form of meditation for it has the power to transport you into a trance. The NGOs we work with have taken to drumming very well, as we use it to complement other therapies in use."

Aanand points to Omkar, a mentally challenged person who has particularly benefited by the drum circle sessions. Omkar is a resident of Sadhana Villageprimarily an institution for the mentally challenged near Pune. He is hyperactive and suffers from epileptic fits. Even during his meals, he has to get up and walk around at least three times. But during each drum circle session, he is able to sit and participate in the activity for one hour without losing focus. "The volunteers and caregivers observe that he has become more calm and aware since the process has begun," Aanand adds.

Elaborating on WCCLF's style of functioning, he clarifies that it runs long term projects for these populations  shorter workshops are only for staff and training purposes. Institutions that are committed to the process of using arts-based intervention as a complementary therapy for their client groups are chosen. Together, the facilitators and the institution authorities identify the needs of the special population. One or two hour sessions with drama, drum circles or dance/movement are planned. For a period of 9 to 18 months, the sessions are conducted once a week. Simultaneously caregivers are enrolled and trained formally to apply the art processes on the project. The interventions are regularly reviewed and the results are documented.

Picture: Drama and movement session in progress at Sadhana village.

Like the residents of Sadhana Village, where WCCLF is implementing a 10-month-long project supported by United Way Mumbai, those of Muktangan and Kripa have also reported positive results. These are drug and alcohol de-addiction centers in Pune. At Muktangan, 66% participants reported stress release after the first session. About half of them felt that they could use music as a substitute for drugs and alcohol and 12.2% spoke of enhanced self-esteem and higher confidence levels. Amongst the Kripa participants, 55% noted an increase in self-expression, alertness and openness, relaxation and confidence, while 66% indicated shifts in their thought patterns. "We have evolved a unique method for Kripa. It is the use of story circles--sharing, making and enacting stories," says Aanand. "For those who find it difficult to talk, a story circle is safe space to listen or to act out. Dramatizing provides an active way to get rid of negative energy and issues. Patients also find the sessions useful in relating within the close community of de-addiction. Story making and enacting have served as a bridge towards identifying their blocks and creating active solutions for the same."

The fundamental paradigms from which WCCLF draws its working methodologies originate from the drama therapy theory and practice developed by Dr Sue Jennings, a pioneer in the field and president of Rowan Studio, UK and Romania. Along with these essentials, WCCLF also draws inspiration from drum circles created and taught by Arthur Hull, Chaau dance, Jungian psychoanalysis, dreamwork, stress management, and organizational development.

WCCLF's success shows that art can break down barriers to communication for a special section of people. It enables the participants to narrate their stories, solve problems, flush out negative energy, and find a way to achieve personal growth. For many, that is a big step towards healing.