A ray of dancing light

Mental illness is an isolating experience which shuts off those affected from experiencing the fun and laughter of everyday life. Kolkata Sanved is working to change that, writes Shoma Chatterji.
15 March 2010 -

Can dance have a therapeutic effect on the mentally ill? Is it an alternative form of cure for patients living under institutionalised care? Kolkata Sanved, an NGO, believes that though dance cannot substitute medicine and psychiatric treatment based on science, it can definitely supplement cure and help rehabilitation. Sohini Chakraborty, its founder-director, believes so.

She collaborated with Anjali, a human rights-based mental health organisation in conducting field research to determine the impact of Dance Movement Therapy (DMT) on the mentally ill in two government hospitals in Kolkata - Lumbini Park and Pavlov Hospital. Support also came from Art Action which facilitated an exploratory research to assess the impact of DMT on people living with mental illness.

"Through time, dance has been used as an agent for healing the body, mind, emotions, spirit and community. The life of a patient in a psychiatric hospital is greatly enriched by opening their world to the creative source of dance movement and expression. Building relationships through the connections made in group rhythmic activities brings new sources of energy to those who are already suffering from some kind of mental challenge," says Bonnie Bernstein, a certified Dance Movement Therapist and Expressive Arts Therapist. She conducted two intensive, month-long, training workshops with Kolkata Sanved in 2008 and 2009.

"Ours is a pioneer organisation in DMT in South Asia. We use it to achieve psycho-social rehabilitation, counselling, empowerment, healing and a mode of expression for victims of violence and trafficking, marginalized people, people facing mental challenges and people suffering from HIV/AIDS," says Chakraborty. "Our work with the mentally ill is based on the realization that these people are ignored. They are rendered invisible and are stigmatized because of their challenged state. The general public does not know much about mental health or about the people who suffer mental illnesses. We have published a brief report of our project, entitled Dance & Recovery. The specific objective is to determine the extent to which the participants of the programme exhibit a change in their behaviour so that they can be reintegrated into their family and community," she adds. 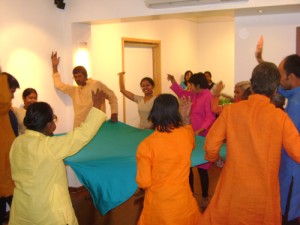 "Once I was selecting dancers for a programme, one participant asked me why she had been chosen. I had no answer. She stopped coming. I realised that I should allow them to decide whether they would like to participate in a programme and things improved considerably," says Nipuna, a trainer.

The project covered 27 participants, eight women and 19 men living with different kinds of mental illnesses. Their disorders included schizophrenia, bipolar disorder, major depression and other severe and persistent disorders. The participants were involved in the programme within a time frame ranging between six months and two years. They were in-patients of the two hospitals for an average period of four years beginning from one year to 14 years.

In the first phase of its programme, Kolkata Sanved helped transform rescued survivors of human trafficking and social trauma victims through DMT to become professional dance trainers. This transitional training covered education, dance, verbal therapy, dance movement training and a focus on bringing out each woman's special gifts. These rescued girls are now trainers with KV and they earn their livelihood by imparting DMT to participants in KV's various projects. These trainers trained the patients in the DMT for the Mentally ill programme.

"We were surprised to discover that though many who were near-normal and were prepared to get back to their families, the families were not prepared to take them back. Reasons given varied from fear of relapse, consequent difficulties in getting them re-admitted to the hospitals considering that this called for a court order, etc. The most tragic part is that the families were unwilling to take on the responsibility of a non-contributing family member," explains Chakraborty. Most of them have their roots in Kolkata while some have come from villages within the state.

"Our trainers have drawn on the therapeutic elements present in Indian dance forms to create a unique and holistic approach for dealing with psychological issues of trauma. They have taken some footwork from Kathak to trigger the release of anger, some bodily postures from Bharata Natyam to rethink the image of the body and its relation to space, and most importantly, stress on the importance of team work through incorporation of folk dance forms," says Chakraborty. Hand gestures are used for story telling while facial expressions open a window to human emotions. There is nothing like a 'wrong step' or 'right step' because the participants are trained to create movements that are actually their responses to experience. Flexibility of the body, limbs and face are given free play. After initial training, the participants are asked to act out their own stories through dance movements and express their unspoken emotions.

"Once I was selecting dancers for a programme, one participant asked me why she had been chosen. I had no answer. She stopped coming. This made me realise that I should allow them to decide whether they would like to participate in a programme and things improved considerably," says Nipuna, a trainer. Another trainer said that the training sessions taught her more than she taught them.

"These classes helped me place my personal grief and anxieties in perspective. I realized that my problems are a mere drop in the endless ocean they are drowned in," she explained. "This was the first time we were stepping into a different world. Our earlier work was with children from shelter homes. I felt a great sense of relief when the first day's class got over. As I walked out of the hospital gates, I felt I had escaped. But slowly, the relationship between trainer and trainee became positive and emotionally charged. We understood that unlike the high energy of children, here was a group that tired easily and forgot quickly, daily medication being one reason."

Some patients who were not a part of Anjalii's rehabilitation programme would come to class and talk to the participants and at times, even hit them. All this had to be managed and controlled by the trainers.

"Dance has made me humane. It has made me agile and my foot ache has decreased. I can visualise my childhood vividly now," says a female participant. "When I perform in functions, I cry because I am reminded of home. But I am also better equipped to deal with grief because I know others too have had similar experiences," says a male participant. Another male participant said that the dance classes had made him more intelligent. The classes have helped them make friends and share their concerns about their families back home with one another.

"Respondents can be temperamental. It is difficult to find out why someone is in a bad mood because the person cannot explain the reason. One day, Rupa (a respondent) wanted to hit Mita (another respondent). But she actually wanted to hit someone else and hit Mita by mistake. This tendency of hitting has lessened to some extent after DMT. Even when it does happen, Rupa is willing to talk about it," says one trainer.

Another trainer said, "Mita would tug at our hands and disturb the class. She would sometimes just get up and leave in the middle. When I asked her to use her imagination, she would string unrelated visuals together. Now she does some exercises. She listens to what I say. She used to be very shy but is not that shy any more. She would never bathe. Now, she bathes and also helps another inmate Preeti to bathe. She takes on more responsibilities. Preeti, an introvert, began to place trust in Mita. Mita would often get into fights with other respondents in the group, hit them and they would bring their complaints to me. I don't hear them complain about her anymore. She also talks more about her problems now."

"The participants of this study have, along with DMT, attended other therapy programmes like art, music, yoga, mime and gardening. Our study was not to establish the superiority of one form of therapy over another but to understand the contribution of DMT towards the healing and recovery of people suffering from mental illness. DMT has been able to knit together song and music, rhythm and imagination to result in dance. The programme has brought together the respondents as a group united through and in DMT. DMT has helped them recall moments of happiness they experienced in the past. They were then able to weave these memories into their own dance compositions and perform these in front of an invited audience. They have rediscovered their body and are cultivating a positive body image. They have also learnt to talk about their feelings and emotions with others within their group," Chakraborty sums up, adding, "DMT is an on-going process. Once begun, it can never end."

Mental illness is an isolating experience which shuts off those affected from experiencing the fun and laughter of everyday life. They live away from their families in institutions where emotions that enrich and sustain the mind are scarce. Life in a mental institution often offers less than the bare necessities essential for everyday living. Patients with different disorders are clubbed together, the severely ill with those under remission. The quality and quantity of food is below normal nutritional levels. Kolkata Sanved has been able to bring in a bright ray of happiness into this otherwise drak tunnel.

BACK TO SCHOOL : Meaningful restart of education is critical
MORE ARTICLES
on similar topics ...
HEALTH