From Busway to BRT

Compared to other bus corridors world-wide, the Delhi effort is a very limited one. The current design is only a busway, and the government must push forward to build a full-fledged Bus Rapid Transit system, say Dario Hidalgo and Madhav Pai.
01 July 2008 -

Policies that give priority to public transport, people-powered vehicles and pedestrians are always very positive. The Delhi Busway pilot project - which is generally referred to as Bus Rapid Transit (BRT) - does all of the above, and hence it should be recognised as a progressive undertaking.

Conceptually, it has a profound sense of equity, as most of the road users in Delhi are walking, biking or riding public transportation vehicles, while the minority - who are rich but influential - are in private motor vehicles. According to data compiled for the Urban Age project, Delhi has less than 5 per cent of its population moving around in cars, 15 per cent in motorbikes and other vehicles, 39 per cent walking and biking and 42 per cent in buses. These statistics alone make a case that the constrained space of urban roads should be allocated in a way that benefits the majority of users.

Beyond equity considerations, space allocation to the most efficient modes of transport also has important sustainability impacts. The resulting financial burden to society as a whole is much lower, and expensive energy sources are used less. Also, emissions into the atmosphere of carbon dioxide as well as toxic substances are lowered, with benefits on the public health front, as well as in the fight against global warming. And overall, less time is consumed in transportation.

These real benefits possibly explain why, in spite of the problematic launch of the busway, and the extremely negative media coverage of it immediately thereafter, the majority of the public still favours the project. Independent commuter surveys conducted by Delhi-based Centre for Science and Environment (CSE) and NDTV found that bus commuters overwhelmingly support the Delhi Busway. For some, the result may be surprising given the operational glitches and the media blitz declaring the bus corridor a disaster. While there are several things about the pilot project that should be improved, it would be both a strategic and political mistake to scrap it. The outpouring of public support for the new bus corridor by the majority of its users should be heeded. Lessons from the various difficulties encountered so far, and also from the experience of other similar projects elsewhere in the world should be considered and implemented. 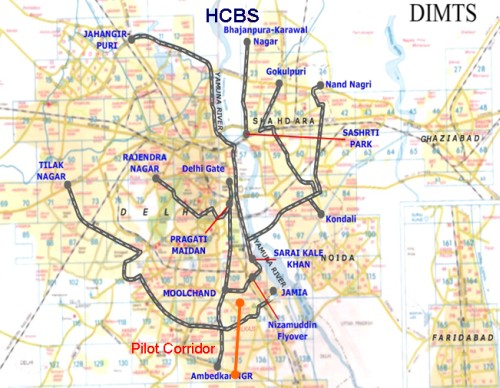 The pilot project covers only a small portion of the eventual Delhi BRTS.

During the first few days after the launch, the traffic signals did not work properly - apparently there was something "lost in translation" from the signal traffic plans and the timing inputs to the traffic controllers. There were a high number of breakdowns of Blue Line buses on the corridor - even the chief minister suggested keeping a crane in the corridor. The bus drivers did not receive adequate training to operate in the new conditions. In addition, multiple cars and three wheelers invaded the 'bus only' lanes - a sign of lack of education and difficulty in enforcement. Some observers declared that the police virtually abdicated their responsibilities, and declined to enforce the flow rules along the corridor.

Some of these problems are continuing; there are still long queues of cars at the intersections, causing frustration and conflicts between pedestrians and motor vehicles. With the result that the busway, as positive a step as it is, is not great.

Partly, this is because, when compared to other bus corridors around the world, the Delhi effort lacks some of the features that make a bus corridor a full-fledged Bus Rapid Transit system. The current design - with its exclusive median bus lanes, parallel bus stops, on-board fare collection, open operation to diverse public transport vehicles, no detailed operational plan and poor user information systems - can at best be described as a busway. To upgrade this facility and its operations, several features observed in high-end BRT systems - in Ottawa, Canada; Brisbane, Australia; Bogota, Colombia; and Mexico City - need to be considered.

Along with the median buslanes, which provide good throughput due to reduced friction from kerbside traffic, a high end BRTS must have real stations with prepayment counters or machines for ticket purchase. The stations should also allow level boarding - where the station floor height matches the floor of the vehicle, and passengers are not required to take a step up or down to board the vehicle. Such steps will greatly reduce the dwell time - the duration for which a vehicle stops at bus station. A good BRTS must also have an organised, centrally planned and supervised bus dispatch and control system; and also install clear/consistent signage and user information systems, among other features. All these components are always present in rail systems, like the Metro in Delhi. There is no reason for these to be absent in complementary modes like BRT system corridors.

Centralised dispatch and control is necessary to prevent bunching of buses. It can be done by advising a leading vehicle not to pick up additional passengers at a particular station, or allow a less occupied trailing vehicle to overtake the one in front.

When these high end BRT features and components are added, the current corridor in Delhi and the planned expansions can have capacities beyond 40,000 passengers per hour per direction (as observed on the TransMilenio system in Bogota), with commercial speeds up to 40 km/hour (as the Metrobus corridor in Istanbul, Turkey). If Delhi wants to have a showcase BRT, a systems approach and a decision to phase out the chaotic operations of the Blue Line buses is necessary.

These concepts are applicable not only to Delhi, but to any city. The government has made the toughest decision already - that of embracing a BRT. What is needed now is the persistence and vision to see the project through fully. And even with its limited start, the busway is able to carry up to 10,000 passengers per hour per direction with commercial speeds below 12 km/hr. Compared to buses operating in mixed traffic, the performance is good, and can be further improved.

Local authorities and the national government in 14 other cities with planned or announced BRT systems must continue with their plans. Based on the Delhi experience so far, it would be wise if they go beyond merely installing the raod infrastructure. In addition, they must incorporate organised operations, intelligent technologies, centralised control and institutions.