They are two simple, rural women, living in rural Andhra Pradesh, in an area known for its arid soils, its resultant lack of food and its poverty. And unbelievable as it may seem, the answer to the healthy skins of Chandramma and Narsamma lies in good nutrition. Keya Acharya has more.
19 March 2009 -

Both of them have skins that look way younger than their years, glowing with a sort of oiled moistness that would need jars of expensive creams for us city slickers to achieve. And yet, they are two simple, rural women, living in Zaheerabad, Medak district of Andhra Pradesh, an area known for its arid soils, its resultant lack of food and its poverty. How could they be so healthy then?

Unbelievable as it may seem, since they come from a poor and arid background, I think the answer to the healthy skins of Chandramma and Narsamma lies in good nutrition.

Eat some of these, Chandramma, standing in the middle of a field flowering in a feast of sunflowers, offers me some young, green, channa . You city people use sprouts, but eating a handful of this channa for one month is equivalent to six months of sprouts, she says by way of explanation of the nutrition in green, red gram, better known as desi channa or horse gram. 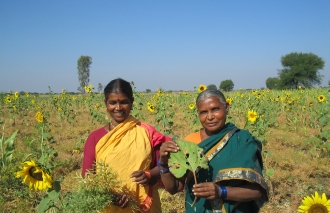 Samamma (left) and Chandramma, displaying how a sunflower works as pesticide by attracting pests to its leaves in an intercropped system. Pic: Keya Acharya.

You cant see the horse gram in the maze of sunflower. But on peering deeper into the acre of flowering yellow in a little village called Bidakanne, some 25 kms from dry, dusty Zaheerabad town, I come across an amazing host of seeding plants interspersed between the tall sunflowers: linseed, chickpea, jowar, wheat, masur dal, ragi and others, a total of 13 different crops in a little less than an acre.

If I plant sunflower as a monocrop it will deplete the soil and next season I will need fertiliser, explains 45 year-old Samamma, the owner of the acre.  In my land, jowar absorbs the fertility, but lentils feed the soils, so I plant in between. In my type of cropping, one absorbs and one gives to the soil, and I get all my food requirements, oils, cereals, vegetable greens.

Organic, without a drop of irrigation or chemical fertilizers and pesticides, these rural women in a remote area of Andhra Pradesh are practicing an agriculture that is ecologically sound, keeps the soil healthy, saves precious water, is pest-free and of immense relevance in the crisis situation of Indian agriculture today.

Samamma says she has been cultivating her dry, non-irrigated lands in this fashion for the last fifteen years. I know only this (type of agriculture); I have been engaged in this since childhood, she says.

That one acre, without any chemical or irrigation inputs whatsoever, produces nearly 1.5 quintals (or 150 kgs) of channa, 2 quintals of jowar and at least 25  50 kgs of linseed, among others. The dried linseeds are powdered along with red chilli to make a pudi, or chutney powder to be eaten with your food. Very good for the heart, says Sammamma. She keeps about 50 kilos of grain, 10-20 kilos of legumes, such as channa, and sells the surplus.

55 year old Chandramma is her neighbour and the overseer of a lot of 70 villages to ensure that planting and sowing are moving organically and well. She works for the Deccan Development Society (DDS), an organization that has helped women, mainly dalits, of 75-odd villages in Medak district form womens Sanghams (associations) that decide their own crops, set up community grain banks that collect surplus produce and sell it at lower than market rates to below-poverty-level members who have no lands, or have not managed to grow enough food. (There are today 5000 women DDS members who are also part of their respective sanghas. )

How do such banks then survive, if they sell grain, sometimes even distribute at no cost in crisis situations ?

The answer to this one is a set of economics as amazing as the women themselves, devised and developed by them at their own meetings. The grain banks have a current participation of 1500 acres in 32 villages under their fold. The women who own these lands take financial loans from the sangham, repayable in five years time in the form of grain.

The community grain bank then sells each years supply of grains in the market and deposits the money in a regular bank. The interest earned from these deposits help cover financial loans and below-market rates of sale to BPL families.

I could not even think of traveling to Zaheerabad in my earlier life, now I have traveled [through DDS] to Sri Lanka, Bangladesh, London and Peru, telling others about our type of agriculture.

•  Films from the fields
•  Between cup and lip

Sangha members, and other farmers from the villages also borrow every years seeds from the seed banks that go with these grain centres, payable back again as grain. The grain bank sells grains not good enough for seed in the open market and the money is again deposited in a regular bank.

In Hulugera village, 50 year old Akkamma is the seed bank manager. She brings out reed baskets of different shapes containing various types of seeds from the cool mud interiors of her house and displays them in little mounds in her front verandah. A sangha senior, she doesnt remember when exactly she learnt the know-how for seed storage and collection, but she is very confident about her methods.  I check the bands and the characteristics of earheads of grains, she tells me.  I learnt this from my ancestors. Those ears selected for seeds are then dried again thoroughly, mixed with ash and neem powder or leaves and stored in reed baskets or earthen pots.

Indeed , the entire system of grain banks and open-market sales has now spawned a retailing of organic cereals to Hyderabad that the DDS women are unable to meet its high demand. The cereals, millets, grams, lentils and the like, are certified as organic produce by an organization called the PGS Organic India Council. A DDS Organic Mobile travels to Hyderabad with grains like millet, ragi, wheat, sorghum and lentils, selling them to the public. DDSs director, PV Satheesh, tells me the women are swamped with the demand for this organic produce.

And yet these women sprang up from the oppressed dusts of Zaheerabads feudal system, so to speak. 50 year old Narsamma, a DDS Sangha senior member, says she would earn one rupee for 2-3 days of work on her landlords fields thirty years ago, sit for hours at her landlords house after work in the evening to beg for some rice for her children at home. Then she heard about the Deccan Development Societys sangha in a neighbouring village, approached DDS and started a sangham in her village and began by saving one rupee per week. 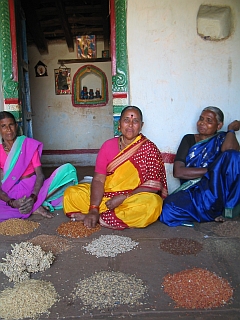 (L to R) Akkamma, Narsamma and Chandramma with a display from their seed bank. Pic: Keya Acharya.

Some of these dalit women then, in subsequent years, got lands from the SC/ST corporation, others graduated to buying their own lands through their savings in the sanghas. Most of these lands were dry, rocky and barren. With DDS sangha borrowings, they began by clearing the lands of rocks and then mixing the remaining soils with farmyard manure in a bid to reclaim them, a two-year procedure generally, thus bringing back to life an ancient agriculture system that had very nearly disappeared.

Ratnamma, another DDS member in her fifties, says she worked as a menial for Rs. 2 a week and, like Narsamma, heard of the DDS from a neighbouring village and approached the organization for help. Their sangha subsequently worked on village common lands on a social forestry scheme raising a nursery of 50,000 plants.  I got good wages and grew from there, she says.

Her two sons were educated at DDSs secondary school at Pastapur, 2 km from Zaheerabad town. She has now built a new house, bought cattle and bought some land too with DDS sangha borrowings coupled with government help.  Now the landlords come to me for seeds, she laughs.

I could not even think of traveling to Zaheerabad in my earlier life, now I have traveled [through DDS] to Sri Lanka, Bangladesh, London and Peru, telling others about our type of agriculture, she tells me. Shes a frequent traveller, jokes Suresh Kumar, joint director at DDS.

But behind the jesting is a serious issue of rural autonomy of a strata of Indians that get excluded from even the panchayati system .  We have thus had no choice but to work independent of the government and establish our own sanghas, says PV Satheesh.

These women have also contributed an agricultural system that now spills over onto the national scene. One which tackles Indias depleting soils, saves the country precious money in fertilizer subsidies, and most importantly does not need rainfall and irrigation.

These women have thus demonstrated an ideal alternative for climate change.

Keya Acharya is a Bangalore based development and investigative journalist. She visited Pastapur and the villages around it in Zaheerabad in February 2009.

CHANGEMAKERS : A fuller picture of ourselves
MORE ARTICLES
on similar topics ...
AGRICULTURE