Sir Arthur Cotton, deified by generations of engineers and technocrats - with his statues found almost everywhere in Andhra Pradesh's coastal districts - supervised construction of what is called the Cotton Barrage (the Godavari anicut) which was completed in 1852. Back then, he viewed it as something greater than a mere engineering effort.

As Cotton saw it, the barrage was something a "Christian government' should do for its subjects ... The emphasis of all this is to give them (the 'natives') entirely new ideas of what a Christian Government is and thus to prepare them to receive Christianity." [Col. Arthur Cotton, Profits upon British Capital Expended on Public Works in India as Shown by the Results of the Godavery Delta Works, of Irrigation and Navigation, London, 1856]

The British are long gone from India, but the language, and the metaphors used in British colonial times continue to be used today. "The river must be restrained from wandering" wrote Cotton; "and all its branches must be provided with artificial embankments to protect the country from being flooded ... It is necessary, by artificial means, to keep the water constantly at a level which shall command the country, and also by a multitude of channels to lead it to every acre of land." And, "The system of works now in progress in the Delta of the Godavery are intended to embrace these four object, viz - to restrain the river; to preserve the land from floods; to supply it constantly with water; and to pervade the tract thoroughly with means of very cheap transit." [Col. Arthur Cotton, London, 1856]

Theirs was a philosophy of obstructing ('taming') what we today call ecological (natural) flows, and also of economic exploitation to maximize profits. And constant irrigation was seen as the means to generate revenue, even if it changed the traditional cropping patterns and methods of irrigation. When the cultivable land was left to 'breathe' at timed intervals, it bothered the British no end. "The number of ploughs lying idle every khureef season (2,000) would cultivate about 8000 acres of rice land, assuming that people work no harder than they now do ..." if irrigation access was provided. [Glasfurd, 1868] "It is necessary to keep the water constantly at a level which shall command the country and also by a multitude of channels to lend it to every acre of land." [Col Arthur Cotton, 1856] 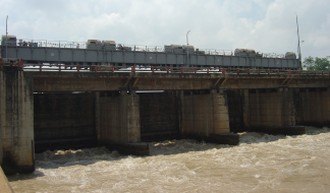 Damming the Godavari in an anicut was not meant merely to contain floods and helping the 'natives'. Every penny spent was being recovered through water tax. In 1878 water rates charged for irrigation in the Godavari and Krishna (then Kistna) deltas were Rs.4 an acre (increased to Rs.5 later) for wet crop, and not less than Rs.6 an acre for the second crop. For dry crop Rs.2 an acre (Above: The Dowlaiswaram barrage, completed in 1852).

•  Jumping into the fray
•  Not just a place to live

Cotton's statistics post-anicut, in the Godavari Districts, proved the benefits of these works in economic terms to the Empire. "The revenue of the Delta including that part that is in Masulipatnam, has increased about 60,000 Pounds ... (and) the amount of money re-circulated in the district had increased to 100,000 Pounds, above the average in years preceding the works; the internal traffic is now estimated at 180,000 tons carried thirty miles ..." [Col Arthur Cotton, 1856]. For his part, Cotton foresaw a larger role for private enterprise on the Godavari in the immediate future, and was disappointed that the Government in Britain was not taking as much initiative in this as was needed.

More than a hundred years later, not only in his legacy of exploiting the river alive in the form of numerous projects that are ongoing, even his unfulfilled dreams of adding private exploitation to publicly-funded ones are close at hand. Commercial tourist traffic, based on the navigation idea that Cotton so religiously defended, to begin with, has already established itself.

Within a month of the Congress government being re-elected in Andhra Pradesh, its Major Irrigation Minister has announced that the Government seeks "national" (project) status for five irrigation projects related to Godavari waters. These include the Polavaram dam (top on the list of priorities), the Dummugudem tail pond, and three other projects at Pranahita-Chevella, Sujala Sravanthi and Sripada Sagar.

Signalling the urgency, he informed that Rs.18,000 crores have been allocated for these, of which Rs.4000 crores would be spent to clear pending bills for these projects. Surprisingly, the enthusiasm for these projects was not evident before the elections. Indeed, neither the Polavaram dam nor Godavari waters in general were part of the electoral discourse, except for the seemingly sudden shift in the Congress' campaign strategy in the last lap of campaigning in coastal Andhra districts - where the party warned voters about possible lack of access to the Godavari waters if Telangana state was allowed to become a reality. 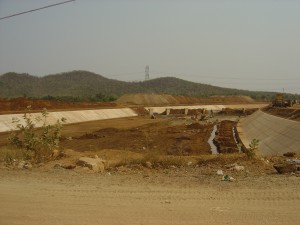 The Polavaram dam is set to change agricultural patterns yet again.

'Utilisation of the Godavari waters' as a slogan was not invoked very much this time, to the extent it was in the 2004 elections. Water resources had a far greater share in electoral debates in 2004 than in 2009. In a conversation at the time of the elections, the former engineer K Vidayasagara Rao said, "Nobody is bothered about water issues. TRS was never against water being given to farmers, nor against Polavaram per se, but only against it in its present design and form. We have been highlighting the need for several small structures - not a big dam - to minimise the extent of displacement."

Even the opportunity for such nuance (TRS has also called for a fortification study of Polavaram, and independent reviews of the projects) may now have passed. Now that TRS has been defeated and the Left has been routed, and even the few remaining voices of opposition within the Assembly have been silenced, the implications on the spate of irrigation projects lined up in the State are worrisome. Several legal violations and socio-economic dimensions of these pending projects (not to mention the long-term environmental impact of restraining natural flows to the sea) have been discussed outside the Assembly. But with the Congress achieving a comfortable majority in the house of the people, these will no longer be part of the Assembly debates. Nor are other parties showing much interest in water issues.

The second coming of the Congress government in the State thus has opened the doors for aggressive consolidation of a form of privatisation and total control of Godavari waters we have not seen before. Sir Arthur Cotton's legacy is likely to continue without critical examination despite concerns about environmental flows, displacement, and exploitation of nature and climate change across the globe at several platforms. Until the idea of exploiting for profit continues, these concerns will remain unaddressed.

R Uma Maheshwari is a freelance journalist based in Hyderabad. She is the NFI media fellow 2008-09, working on tribal land dispossession in the Polavaram dam context.

TIGER SANCTUARY : Are tigers back at the Buxa reserve?
MORE ARTICLES
on similar topics ...
ANDHRA PRADESH