Five years ago, the Dehradun-based Forest Research Institute (FRI) investigated the large-scale death of Tamarind trees in Delhi. Examining the reasons, FRI observed in its report, aeration and water supply to the roots were also severely restricted as a result of concrete pavement. The compactness of soil inhibiting the growth of feeding roots ultimately resulted in root mortality.

Today, most of us in cities and towns are quiet witnesses to the changing face of our green spaces to accommodate the pressures of urban development. They take the form of flyover construction, conversion of wetlands into shopping plazas, or prime bird watching areas becoming ash dumps and other projects. There are a few reactions, some appeals and campaigns, but unfortunately very few responses from governments.
See: Inter'changing' the greens 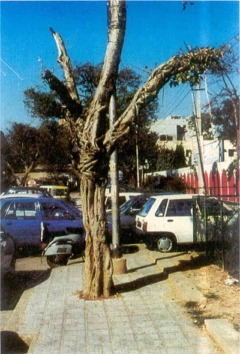 For Indias capital, Delhi, one critical issue is the mindless concretization of pavements and green spaces. (This might be the case in other urban areas too). Consistently, the municipality is replacing greenery lined pavements with tiles. Once that is achieved, a yearly task follows, removing existing tiles and replacing them with newer designs. These range from kota stone slabs to chequered tiles or interlocking tiles.

Trees that stood strong over the years are the worst affected. Once sealed around with tiles or slabs, trees have no breathing space whatsoever. Both their superficial and deep roots are impacted. With no scope of water percolation or deep root aeration, the healthiest of trees are subject to slow death. This is even in the monsoons when the trees are meant to flourish.

Superficial roots are concentrated on the top few inches of the soil; but this is often removed during a tiling exercise, to accommodate an asphalt mixture. In turn, this destroys the superficial roots. Further, top soil is extremely fertile and its formation is a slow natural process. Rather than conservation, efforts are channeled towards its unthoughtful removal only to be replaced after being mixed with debris and wasted as landfill material.

A very recent example of this is the central verges of the Lodhi Road in New Delhi. The topsoil was dug up along with existing concrete slabs which ran across the sides. The mixture of the malba (debris) along with the removed soil lay along the sides for days, blocking traffic. Following this, municipal workers installed iron rods around trunks of all trees on the verge. As if this was not enough, the malba mixture found its way back into the verge. So on the exterior the central verge looked green, inside was a solid story.

Theres more. Concrete slabs attract heat. With the long Delhi summer, these tiles or slabs would do nothing less than scorch the roots. Such overuse of concrete in areas of public utility is not just unnecessary, but extremely detrimental for the urban green lungs. Impacts get amplified in an already dense built up environment of a metropolis.

All in all a really bad idea! No doubt pavements are critical for pedestrian movement and safety. But the critical question is whether they need to be wholly cemented.

Prabhakar Rao, member of Kalpavriksh Environmental Action Group says in a The Hindu sunday magazine article, pavements can be raised and kept green with grass beds, shrubs and trees. What is amazing is that grass grows on its own, and rapidly. Grass prevents dust pollution because it binds the soil. Yet, what do we find in Delhi? Pavements that are concrete surfaces. He further adds, In Delhi, most roads have a negligible pedestrian load, but heavy vehicular traffic. It makes little sense to have concrete pavements on Motilal Nehru Marg, Akbar Road, Aurangazeb Road, Tughlak Road and Krishna Menon Marg.

The manner in which Delhi is concretizing its pavements is already in violation of the states law on preservations of trees as well as central government urban development guidelines.  •  Inter'changing' the Greens

On the contrary there are heavy pedestrian locations like in front of Zakir Hussain College, Jawahar Lal Nehru Marg, where there is pedestrian movement, the pavement is ironically full of construction material like cement and bricks, with very little place to walk.

Delhis concretized pavements are already in violations of planning norms. The Ministry of Urban Development and Poverty Alleviation has guidelines on this dated 21st July 2000. On the topic of environmental damage due to unnecessary and wasteful building exercises undertaken by municipal agencies, the guidelines clearly lay down certain criteria. The Ministry says:

•  Unnecessary and excessive tiling on roadside pavements need to be avoided.
•  ..the area around trees lined along the road should not be covered with tiling as it hampers the basic necessary functions and needs of the trees.
•  An area of 6 ft x 6ft should be left uncemented and compactness of soil should be avoided atleast one metre around the tree.

But while air and water pollution have received some attention in urban environmental campaigns, soil is something that continues to be ignored. In fact, both government and non-governmental sectors have acknowledged the detrimental impacts of such activities. Also, avoiding unnecessary expenditure allows the municipality can save crores of rupees that can otherwise be used for more important public activities. Yet, mindless concretization to happen. Why?

Large-scale construction activities today are synonymous with large monetary resources; many citizens believe there is a nexus between municipal spending and mining activity in Delhis neighbouring states. Rampant mining brings cement, bricks, stones and sand from the Aravalli Hill Range in Rajasthan and Haryana. The Aravallis are a significant ecosystem and are being quarryed off to cater to the tiling exercise in large scale. The Supreme Court is already hearing some cases.

A central verge in Delhi with greenery

But civil society groups have not remained silent spectators. Compelled to act, eight NGOs and citizens groups in Delhi filed an application with the Central Empowered Committee of the Supreme Court, in May 2003. The petition presented several points of arguments. One stated that concretization of pavements is in violation of The Delhi Preservation of Trees Act, 1994. The application presents Section 2 (h) of the Act, which defines felling of tree.

The petition also points out that concretization violates the provisions of the Environment Protection Act, 1986. The process of putting sand, stones, asphalt already comes within the meaning of the use of hazardous substance as defined in Section 2 (e) of the Act. The Act defines hazardous substance as any substance or preparation, which, by reason of its chemical or physico-chemical properties or handling, is liable to cause harm to human beings, other living creatures, plant, micro-organism, property or the environment.

The construction and the mining lobbies are powerful. In the meantime, the case is still pending decision at the courts, and the Urban Development guidelines are waiting to be implemented. Expert reports are being ignored, laws are being violated, and indiscriminate tiling and concretization continue. So much so that there is shocking evidence of mandatory green spaces with patches of green and abundance of cement slabs. All this under the eyes of an environmentally conscious state government in Delhi, which could put a stop to the legal violations, but does not. Naturally, many citizens are questioning the intentions of Delhi authorities; they feel that no one wants to mess with the strong construction lobby or play spoiler over the shared monetary benefits.

Some years ago, community volunteers and NGO workers had actually ripped the tiles from around suffocating trees in Delhi. Perhaps once again, citizens will have to act.