Fiery debate back, but standards scuttled

Once again, a study by the New Delhi-based Centre for Science and Environment found alarming levels of pesticide residues in soft drinks and stirred up a public debate. However, the larger issue of how pesticides have invaded the ground water and gotten into the food chain must not be missed, notes Ramesh Menon.
09 October 2006 -

The cola war goes on. And there does not seem to be an end in sight very soon. Soon after the Centre for Science and Environment (CSE) headed by its feisty director, Sunita Narain, came with a second study on how cola majors continued to have pesticide residues in soft drinks like Pepsi, Miranda, Coca-Cola, Thums Up, Limca, Fanta and so on, the fireworks commenced again. The cola multinationals struck back saying that the study was unscientific and biased. CSE stuck to its study while a bumbling health ministry raised doubts about it without having a scientific basis to say so. After the Health Minister, Anbumani Ramadoss, said that the colas were safe, CSE hit out saying that the government has no proof that the drinks were safe as it had drawn the inference by just testing two bottles! CSE had asked for the study to be made public but no details were given.

Just three years ago, the CSE had come out with a study showing unsafe levels of pesticides in soft drink samples from Delhi. There was a furore then and both Pepsi and Coca-Cola got together for damage control talking from the same platform. Rivalry and competition was forgotten as they tried to debunk the findings.

In October 2005, after months of data analysis and discussion with all stakeholders  including the two soft drink majors, the Bureau of Indian Standards finalised the norms. But it has yet to be notified.

•  Soft-pedalling the cola ban
•  Is Coca Cola moving out?

The Indian Parliament sat up and banned the drinks in its canteen. It also set up the Joint Parliamentary Committee to examine the issue. The JPC validated the findings of CSE and in early February 2004 asked the government to standards to be set for carbonated drinks. Since then, the Bureau of Indian Standards met over 20 times to deliberate on the standards. This was the first time standards were being formulated for pesticide residues in soft drinks by the BIS. In October 2005, after months of data analysis and discussion with all stakeholders  including the two soft drink majors, it finalised the standards. But it has yet to be notified.

But the standards were not notified. In effect, this meant that the standards did not have any value. CSE pointed out that the health of people did not seem to be of concern to the regulator, the Union Ministry of Health and Family Welfare. Three years is a long time. Long enough for some action to have been taken.

Maintains Chandra Bhushan, Associate Director, CSE: "Finally, both Coke and Pepsi were able to stall the standard setting process. The CSE agreed to be part of the BIS committee hoping to help out in creating standards. But after three years of working, we found that by twisting the system, they could get away from setting standards. The Ministry of Health and Ministry of Consumer Affairs actually asked the BIS to go slow on the standards issue as they were working along with the cola companies. As we saw nothing had changed so we decided to check the pesticide content again and go public so that some pressure can be built." 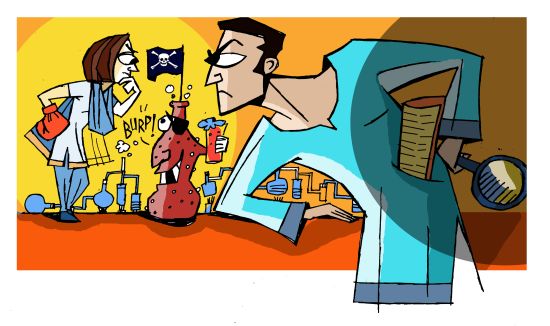 The 2006 CSE study showed that nothing has indeed changed. The study tested 57 samples of 11 soft drink brands, from 25 different manufacturing plants of Coca-Cola and PepsiCo, spread over 12 states. It found pesticide residues in all samples. There was a cocktail of three to five different pesticides in all samples.

On an average, the residues were around 24 times higher than norms set up by the Bureau of Indian Standards. For those who love these drinks, here is a shocker: The levels in some samples like Coca-Cola bought in Kolkata, the level of Lindane, a deadly pesticide was more than 140 times the permissible limit. Similarly, a Coca-Cola sample manufactured in Thane contained Chlorpyrifos, a neurotoxin that was 200 times above the standard!

The current study was conducted by the same Pollution Monitoring Laboratory of CSE which had tested samples in 2003. At that time, both Coca-Cola and Pepsi had raised numerous issues regarding the veracity of the CSE study and the capabilities of its laboratory staff. Later, the JPC scrutinized the labs and validated the study and the methodology used. This time CSE ensured that the laboratory was accredited with the ISO 9001:2000 quality management system apart from using state of the art equipment.

Notably, soft drink companies have hit back this time saying that compared to other food products available in the market, their pesticide levels were low. CSE director, Sunita Narain, ridiculed it saying that safety was not about high or low numbers and these companies were resorting to scientific jugglery. "Pesticides are tiny toxins and deadly for us if we are exposed to quantities higher than what is defined as an acceptable limit. "This is a grave public health scandal," she said.

Documentary film maker Umesh Aggarwal points out that the stand of cola companies of how their products had lower pesticide than other foodstuff available was not tenable as food like milk and fruit juices have a nutritive value that offsets the pesticide content but the same cannot be said of carbonated drinks. Aggarwal has just completed a film called, "Whistle Blower" which takes a hard look at the issue of pesticide content in soft drinks. It is 44 minute documentary made for the Public Service Broadcasting Trust.

CSE argues that as it is an issue of public health, it is not negotiable. After all, pesticides are known to lead to complicated health problems, because they are toxic and not supposed to be consumed at all. The Union Ministry of Health and Family Welfare is ironically arguing that more research needs to be done before the standards are put in place. Ramadoss now says that standards for aerated water would be set by January 2007.

Many however, appear to feel less concerned with the implications. Barun Mitra, Director of the Liberty Institute, an independent think tank in Delhi, laughs it off saying that pesticides in cola is hardly an issue as there are more important issues like availability of safe drinking water.

Amidst all this, even as the main actors of the drama were in the capital battling the cola controversy, a group of activists under the banner of the National Alliance of People's Movements coaxed the Central Pollution Control Board in Varanasi to visit the Coca-Cola bottling plant at nearby Mehndiganj to check if toxic effluents were polluting water bodies and fields close to the unit. They alleged that around 25 lakh litres of ground water was being depleted daily by these companies pushing down the water level. Incidentally, this was exactly what had happened in Plachimada in Kerala that resulted in the Coca Cola factory being closed. According to Dr Sandeep Pandey, National Coordinator of the NAPM, the sludge from the factory had heavy metal concentrations like lead, chromium and cadmium that was over the permitted limit.

If anything, in the debate that rages around the colas, the moot point that seems to have been missed that if there are pesticides in the colas, it has come not come from the company factories, but from ground water that is heavily polluted with chemical fertilisers and pesticides leeching into the water table. Clearly, we need to clean up our act, though this does not mean that colas can continue have pesticide content merely because ground water remains contaminated.

Says CSE's Bhushan: "It is not a question for soft drinks alone, as we want to work on food standards. In India, there are no standards for processed food commodities. Raw agricultural commodities cannot be monitored, as it is very complicated. So processed food can have standards. In the near future, the processed food consumption is going to rise. It was important to show scientifically that they are breaching standards." Adds Sunita Narain: "We also do not have the luxury of first cleaning agricultural raw material, then building our processed food industry. We will have to clean both ends of the food chain -- the farm and the fork. We will have to do it together."

Ramesh Menon is a journalist and documentary film maker. In April 2006, he received the Ramnath Goenka Award for Excellence in Journalism for his report in India Together on how pesticides had turned Punjab into a poison field.

TIGER SANCTUARY : Are tigers back at the Buxa reserve?
MORE ARTICLES
on similar topics ...
CONSUMERS