At last, some good news on conservation

India's community conservation areas (CCAs) are nowhere near prosaic; they are instead heartening and remarkable pools of ecological and biodiversity rejuvenation in a country beset with environmental degradation in its bid to industrialise. Keya Acharya identifies the silver lining.
21 June 2007 -

If you use the acronym 'CCA', it sounds like yet another dry file on a matter for discussion in, say a climate change conference or a development debate. But community conservation areas (CCAs) are nowhere near prosaic; they are instead heartening and remarkable pools of ecological and biodiversity rejuvenation in a country beset with environmental degradation in its bid to industrialise.

CCAs are forests, grasslands, wetlands or marine areas of various types, small and large, either specific ones set up for conservation, or for cultural and spiritual reasons with some having been around for centuries. They involve village-level efforts at conservation of a varied range of natural resources from wildlife nesting, feeding or roosting sites, threatened wildlife species to water catchment reservoirs and resource reserves.

"Even though some are disappearing and inspite of the difficulties involved in conservation of natural resources for a varied number of reasons, CCAs still remain in the hundreds of thousands countrywide," says Ashish Kothari, founder-member of environmental NGO Kalpavriksh, who together with Neema Pathak and others at Kalpavriksh has spent years searching for and documenting some of these initiatives countrywide. Kalpavriksh is now in the process of publishing a directory of such community-conservation areas. 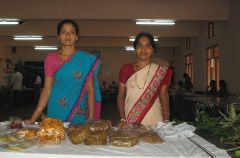 In Mehnda, a small tribal village in Gadchiroli district of Maharashtra, adivasi Gonds have transformed 1800 hectares of common village lands into a stretch of forest with 150 bird species, besides becoming extremely important to the survival of the threatened Giant Squirrel. In the process of keeping these forests, the villagers have also barred a paper mill from destroying bamboo stocks and stopped forest fires. There is no government forest department personnel presence in these forests.

All decisions regarding these forests are taken at village assemblies where all inhabitants are present. Decisions are based on background knowledge first, with regular study circles formed to obtain information on the forest.

In one instance, the villagers found that their quantity of honey collected annually was decreasing and got worried that their extraction was pressurising the bee population. They then brought in a honey bee expert for guidance and matters have improved since.

Conservation has thus been linked with livelihoods, with these forests providing much more than just honey, but also biogas energy and non-timber forest products for sale. The biogas initiative is now spreading within a radius of 1520 villages.

Yet another remarkable case comes from Maharashtra again, in Chandrapur district near Tadoba, where a young dalit boy 25 years ago spearheaded a move to regenerate and re-forest once-degraded lands. He was helped in his efforts by women of the village as far back as 1979, much before Joint Forest Management became official policy, who collected together in an effort to save their forests from degrading. There was strict monitoring of grazing, common extraction of fuelwood and other needs, with laws being set up for the purpose. Chandrapur's community conservation effort is now internationally recognised and has won many awards. It still remains a conservation pool today.

In Ranapur, in Orissa's Nayagarh district, water and biomass scarcity due to deforestation from timber smuggling and heavy industrialisation in the 1970s led ultimately to an astonishing federation of women from 190 villages monitoring and protecting approximately 10,000 acres of community forests. Some, like Dangejhari village have an all-women forest protection committee for their CCA.

Faced with an impending ecological crisis, many villages in Ranapur in the 1970s started by outlining forests for protection and regulated use of resources within and around their villages. By the 1990s, almost all the forests in the area were under protection by one village or another. This however, then led to frequent clashes between communities protecting forests and those wanting to access it, since open access had become scarce. The need for conflict resolution to fight external pressures resulted in a small cluster of villages coming together to form a federation facilitated by NGOs including Vasundhara. Today Maa Maninag Jungle Surakhya Parisad (MMJSP) is 190-village strong body.

Partly because of how conservation was worded into the law, there is hardly any practical recognition, public awareness or scientific interest in CCAs in India.

Women entered this federation in 1999, when the men in the villages faced physical assault and loss of daily income because of patrolling the forests. The women from Dangejhari village then decided that they would take over, and did a great job of beating off illegal timber-mafia who, scared of being accused of physical assault against women, ran off!

The women have a sort of 'baton relay' system for monitoring duties. Every day, four women patrol the forests and by evening, the batons are placed in front of the houses to be taking over duties the next day. The women's committee has also laid out rules for domestic collection, commercial extraction and hunting are strictly prohibited. The very poor are allowed to collect dry and fallen wood for selling. Penalties are stiff: besides a rate-based fine, which increases if you have a history of stealing wood, the offender is tied to a tree in the village and has to wait for the president or the secretary of his/her respective forest protection committee to bail them out.

Some CCAs in northern and eastern India reveal that the initiative to conserve natural resources has sprung from the need for a water source. In Bhaonta Kolyala in Alwar, Rajasthan, an acute water scarcity made the village decide to protect water catchment areas and put up water conservation measures like check dams with the help of the NGO Tarun Bhagat Sangh. The resultant forests, sprung not from the motivation of saving wildlife, but from water, is now an amazing 1200 hectares, where grazing is strictly regulated and hunting totally banned. The village of Bhaonta Kolyala has declared this forest the Bhairondev Sanctuary. The sanctuary continues today.

Wildlife revival has happened in Uttaranchal too where Van Panchayats, either centuries old or begun by the British, have preserved, or regenerated tens of thousands of acres of high-altitude forests and pasture lands that have now become critical wildlife corridors for leopards, bears and other species. Jardhargaon village, for example has raised or regenerated 600-700 hectares of forests, revived several hundred varieties of agricultural crops and created a synergistic link between agricultural and wild biodiversity, according to the IUCN's reports on community conservation. The Beej Bachao Andolan, a network of farmers working to save indigeneous seeds, was born here.

In the northeast at Khonoma, about 20 kms from Nagaland's capital city Kohima, a traditional hunting community called the Angani have a 70 sq-km area used for this specific purpose according to ancient customs. Nagaland's state bird, a beautiful, now endangered pheasant called Blyth's Tragopan is found in this region, and hunted for its meat. In 1993, 300 tragopans were reportedly killed for meat. (Source: Pathak, N. and Kothari, A. 2006. Protected areas, community based conservation, and decentralization: lessons from India. A report prepared for the Ecosystems, Protected Areas, and People Project (EPP) of the IUCN World Commission on Protected Areas).

The community then did a remarkable 'u-turn' and in 1998 set up the Khonoma Nature Conservation and Tragopan Sanctuary (KNCTS) of 30 sq kms of their 70 sq-km hunting grounds at Khonoma-an- Angani. Their leader for this initiative was Tsilie Sakhrie, a contractor dealing with the forest department and motivated by forester T Angami to set aside some of their lands for wildlife conservation.

Today, the villagers have the KNCTS Trust (which they set up) with formal rules and regulations for managing the sanctuary, including penalties for violations. Village youth are selected as wardens and monitor the sanctuary.

The tribe's main concern stemmed from a local cultural viewpoint, but is revealing in showing how conservation is a concern amongst communities that have hunted wildlife for centuries as part of their culture. The Angani found that the Blyth's Tragopan was disappearing and decided to do something to protect the bird. Used to living with the bird ever since they knew of their existence, the elders are now worried. "What will our younger generation hear if the bird-call is not there?"

But inspite of villagers managing to attain even the degree of protection they have today, CCAs face many problems. Ashish Kothari says they are insecure because the lands of some of them belong to the government. And because they do not have any legal backing, since there is no recognition of them as conservation sites, CCAs are unable to withstand land-use change for any of the government's development plans of tourism, mining, dams or even for an SEZ, if it comes to that.

Kalpavriksh has made the documentation of CCAs an international policy issue by the World Conservation Union (IUCN) through its network called TILCEPA (Theme on Indigenous and Local Communities, Equity, and Protected Areas). The issue first came up at the World Parks Congress at Durban in 2003 and from there was incorporated into the Convention on Biological Diversity (CBD), of which India is a signatory, legally binding it to recognise CCAs.

"But we've been somewhat less successful in India," rues Kothari, "where it was also our pushing and prodding that the category of community reserves got into the Wildlife Act, but unfortunately in a way that was not particularly helpful." Section 36A-36D of the Wildlife Protection Amendment Act 2003 has allowed Conservation Reserves and Community Reserves, but does not hand over control to the community, which acts only in an advisory capacity to the Chief Wildlife Warden of the forest department. In CCAs, such as in the northeast, where lands belong to the communities, this provision in the Act will only cause suspicion as yet another attempt by the government to take control of community lands.

Part result of this ambiguous inclusion has been that there is hardly any practical recognition, public awareness or scientific interest in CCAs in India. Apart from a couple of initiatives by SACON in Nagaland and the NGO Vasundhara in Orissa, public consciousness continues to view protected areas as those belonging to national parks, reserve forests and government declared-sanctuaries.

Yet CCAs are, and are growing to be a vibrant method of local conservation in India. Old ones, like the Appiko movement for saving forest trees in north Karnataka have now become a pool for regeneration and protection of reserve forests and 'soppina bettas' or leased forest lands enveloping hundreds of acres today. New ones, like a women's network for conservation and propagation of local biodiversity through indigenous vegetable, tree and flower seeds in the same region of Sirsi in north Karnataka, spearheaded by a woman, Sunita Rao, has now evolved into an enthusiastic system 'with a soul of its own', as Sunita says.

A fragile hope, fragile due to the threats of land-use change and lack of legal protection, thus grows in the Indian conservation context today.

Keya Acharya is a Bangalore based development and investigative journalist.