Clearance revoked, but you can still have the forest land!

A CAG audit report finds that despite the revocation of clearance for forest land diverted to a public sector power company, the land continues to be used by them. Himanshu Upadhyaya details this and other findings, which show the gloomy picture of forest governance in West Bengal.
29 July 2014 -

An audit report tabled on 10 July in the West Bengal assembly reveals details about the CAG review of the performance of the State Forest Department and paints a very gloomy picture of the state of forest governance. Having a recorded forest area of 11879 square kms (13.38 percent of its total geographical area), West Bengal has the lowest per capita forest area.

Almost 60 percent of the state’s forest area falls under Reserved Forest (7054 square kms), while Protected Forest and Unclassed Forest accounts for 32 and 9 percent of total forest area in the state respectively. Added to this, the high density of human settlements around fragmented forests of the state (the highest in the country) poses peculiar governance challenges.

CAG auditors carried out the performance review between March 2013 and July 2013. Prior to commencement of the auditing exercise, objectives, criteria and methodology were discussed in an Entry Conference held with the Additional Chief Secretary of the department in March 2013.

The performance audit adhered to standard audit guidelines: joint site inspections with departmental officers were made, during which photographic evidence was compiled and discussions were held with the officials of the directorate. In addition, a scrutiny was undertaken of records of 24 divisions out of 58 divisions selected through Simple Random Sampling without Replacement Method.

CAG auditors communicated the audit findings to the department and the same were also taken up for discussion at the Exit Conference with the Principal Chief Conservator of Forests in November 2013.

The performance review brought out the dismal performance of the forest department in terms of ensuring due diligence before granting permission for diversion of forestland for non-forest purposes.

Audit scrutiny put under the scanner the case of diversion of 283.54 hectares of forestland in favour of the West Bengal Power Development Corporation (WBPDC) for construction of reservoirs for the Bakreswar Thermal Power Plant in Birbhum district. The stage I forest clearance granted by MoEF was revoked in October 2001 due to non-compliance of conditions stipulated in this stage of approval.

In spite of this, the department took no action to take back the forestland from the user agency and the said land was continued to be utilised by the WBPDC without obtaining stage II clearance.

No progress on Eco-tourism

The performance review reveals that despite the National Forest Commission’s recommendation in March 2006, which had asked each state to formulate its own policy for sustainable management of its forests and wildlife, West Bengal had failed to formulate any such policy. Similarly, even on the eco-tourism strategy front, the department had nothing to show.

This is despite the fact that the Ministry of Environment and Forest Guidelines for Eco-tourism in and around ‘Protected Areas’ (June 2011) expected that each state would formulate such a strategy by December 2011. When these glaring failures on policy front were pointed out, the Directorate grudgingly stated at an exit conference at the close of the auditing exercise that the State Eco-tourism Strategy was under preparation.

Even on wildlife conservation, the performance review reveals startling non-compliance and sluggish decision-making process. The State Board of Wildlife was constituted after considerable delay in November 2003, though it is mandated under the Wildlife (Protection) Act of 1972.

The Board is supposed to advise the state government on selection and management of Protected Areas as well as formulation of policy for protection and conservation of wildlife and to specify plans and measures to be taken to harmonise the livelihood needs of tribals and other forest dwellers.

While the Wildlife (Protection) Act mandated that the Board shall meet at least twice a year, audit scrutiny of records revealed that it met only on eight occasions during the last ten years of its functioning, from November 2003 to November 2013. The report also pointed out that the most recent meeting of the Board had taken place only in February 2012, thereby underlining the fact that it had not met for more than eighteen months on row as on November 2013.

The response of the state government to  the recommendations of the State Board of Wildlife has been lacking in equal measure. Out of seven recommendations -- namely creation of strike force for the Sunderban Tiger Reserve (STR) and Buxa Tiger Reserve (BTR), setting up of three conservation areas, preparation of an Eco-Tourism Policy,  declaration of West Sunderban Sanctuary, setting up of a special corpus fund, purchase of Koylarbagan for Chintamanikar Wildlife Sanctuary and organising a Wildlife Film Festival -- only one recommendation was implemented in September 2013 by way of declaration of the West Sunderban Sanctuary.

As far as preparation of working plans for different forest divisions is concerned, audit scrutiny revealed that despite having three dedicated divisions to prepare such plans for the 25 territorial divisions, as on November 2013, the department had the working plans for just 23 divisions on record, duly approved by the Union Ministry of Environment and Forests (MoEF).

The audit also observed that the working plans of 10 territorial divisions were approved after delays ranging between 15 months and 39 months. These divisions had failed to submit their working plans to the MoEF before the expiry of the previous working plan, which is normally the practice to avoid time lags.

Out of the four remaining protected areas, management plans for three – namely, Bethuadhari WLS, Ramnagaban WLS and Singhalila National Park – were under revision at the time of the performance audit.

A meeting on management of forest boundaries, held in August 2011, recommended creation of a dedicated land cell within the forest department in order to create a database of land under the possession of department. However, in a shocking revelation, the CAG report stated that no such land cell had been formed as of November 2013. In its reply to this audit finding, the Directorate stated that the database was under preparation.

Further, the performance review observed that in 12 selected divisions, they witnessed no system of periodic reconciliation of records of forestland with the Record of Rights maintained at the Block Land and Land Reforms Office (BL&LRO). Out of these 12, four divisions stated that the Record of Rights were not available, six divisions did not furnish any records and two divisions merely stashed away the collected Record of Rights (from BL&LRO) in a bundle, without taking the trouble to link and reconcile the same with their records.

Scant regard for wildlife corridors

On the issue of death of wild elephants in train accidents, the performance review makes startling observations. It reveals that while the department had identified 14 elephant corridors in North Bengal as early as in 2004, almost a decade since, these were yet to be notified as of November 2013. In particular, the railway track of 168 kms between New Jalpaiguri and Alipurduar passing through eight main elephant corridors caused a serious threat to elephants. 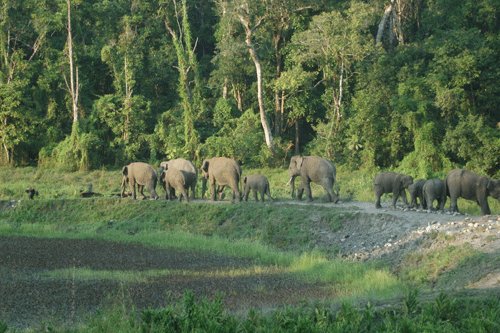 A scrutiny of records pointed to the fact that 50 elephants had died in train accidents on this track between May 2006 and November 2013. Scrutiny of records also revealed that the MoEF had directed the department in April 2013 to undertake the review of identified elephant corridors in the state, in view of severe fragmentation of large forest patches which distracted elephants on the move. However, there was nothing on record to show that this recommendation was followed either in letter or spirit.

Will the new union minister crack the whip, now that the CAG performance review has brought such gross violations of environmental regulations on various fronts to the fore? Perhaps the new powers-that-be should read this performance review to understand that prudent environment and forest governance does not merely mean encouraging fast track clearances.