The Ministry of Mines and Minerals says it may lift the ban on asbestos mining. It is ignoring the views of exposure victims, informed recommendations of public sector medical experts, and mounting evidence of an asbestos disease epidemic emerging in developed countries. The rationale to permit mining is hollow, writes Gopal Krishna.
12 April 2006 -

Unexamined in the media, workers in India work up to their knees in asbestos powder, breaking up asbestos cement roofs and pipes. Stories of the toll asbestos takes on people are yet to hit the headlines in India as been the case in US, Europe, Australia and Japan. Indian homes are often built of asbestos cement roofs, and people cut their own windows and doorways. Research is showing asbestos epidemics across the globe even in countries where it is currently banned, as the consequence of past exposure, with estimated deaths reaching 30 per day.

The International Labour Organization said in January 2006 that asbestos is still the No.1 carcinogen in the world in its report titled "Asbestos: the iron grip of latency." It adds, the dumping of asbestos on developing countries will "prove to be a health time bomb in these countries in 20 to 30 years' time." Jukka Takala, Director of the ILO InFocus Programme SafeWork, issued the report.

Asbestos is the generic term for a number of naturally occurring fibrous minerals. Commercially, the most important of these are the white, blue, and brown varieties, otherwise known as chrysotile (a serpentine asbestos), crocidolite, and amosite. Blue and brown variety of asbestos are banned in India.

While white asbestos mining is currently banned in India, its import, export or use in manufacturing is permitted. But recently, the Ministry of Mines has indicated that it may lift the mining ban.

The reality is that the country's most powerful parliamentarians bless the asbestos industry. On 1 January 2006, production began at an asbestos-cement factory in Rae Bareli, Uttar Pradesh, in the constituency of Sonia Gandhi. The factory is of Visaka Industries, one of India's largest asbestos groups. The company also has asbestos-cement factories in Andhra Pradesh, Tamil Nadu, West Bengal and Karnataka. The Chairman of Visaka Industries, G Vivekanand, is the son of the G Venkataswamy, Member of Parliament, Deputy Leader of the Indian Congress Parliamentary Party and a former Union Textile Minister.

Visaka Industries has asbestos plants located even in Midnapore in West Bengal where CPI(M) is the ruling party for more than 25 years. Although Centre of Indian Trade Union and All India Trade Union Congress have called for ban on asbestos and have also written to the Prime Minister, the fact remains, that the CPI(M) has not gotten rid of it from their own backyard.

There are some states, for instance Assam, UP, and Tamil Nadu, where asbestos factory units are run by the state governments. Pulivendala, Andhra Pradesh Chief Minister Y S Rajasekhara Reddy's constituency, has 14 mines. In September 2004, P Dayasankar, Director, A.P.'s State Mines and Geology Department was reported in the Business Standard to have predicted that the ban on mining may well be lifted. Taking the line that state and central health agencies were also in favour of lifting the ban, he said: "We have already represented the matter to the government of India for the appropriate decision. To my knowledge, the Centre is on the verge of taking a positive decision."

It is not difficult to notice why the entire political establishment wears blinkers when it comes to acknowledging the fact that currently over 40 countries including Europe have banned all forms of asbestos including chrysotile (white asbestos) due to health hazards. With asbestos firms being owned by politicians or the state itself, the government seems to be following a classic ostrich policy.

What else can explain the discredited claims of 'safe use' of asbestos by the industry and the virtually blasphemous statement to Parliament on 27 February 2006 by Namo Narain Meena, the Minister of State for Environment saying, "No complaints have so far been received regarding its carcinogenic content and its hazard to health and environment."

There are sane voices in government too, but these have been exceptions. It is noteworthy that the former Union Health Minister in the NDA government Sushma Swaraj informed Parliament on 18 August 2003 that: "Studies by the National Institute of Occupational Health (NIOH), Ahmedabad, have shown that long-term exposure to any type of asbestos can lead to the development of asbestosis, lung cancer and mesothelioma."

Since 1984, environmental monitoring and health surveys have led to in-depth studies in asbestos based industries in India, highlighting an occupationally vulnerable worker population. It was noticed that the workers occupationally exposed to asbestos have a maximum impairment in their pulmonary function test. Besides the consumers, workers employed in the cement-asbestos factories also suffer from the exposure to asbestos. Its incubation period is long, it takes as long as 25 to 30 years for the fibers to make their presence felt in the human body but by then it is incurable. In the developed countries, insurance companies have stopped covering workers employed in asbestos factories and mines. 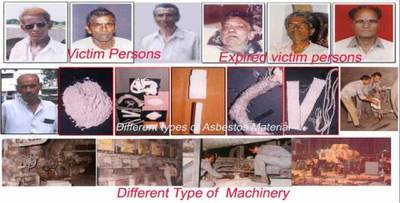 It was in view of the deleterious effect of asbestos mining on the health of the workers, the central government ordered the state governments in 1986 not to grant any new mining lease for asbestos (including chrysotile variety) in the country. In June 1993, the central government stopped the renewal of existing mining leases of asbestos. The ban was imposed in phases in 1986 and 1993 but not on its use, manufacture, export and import, as noted earlier. But despite the ban on mining, illegal mines are operating in the states of Jharkhand, Rajasthan and Andhra Pradesh. Most asbestos-cement is using imported asbestos, some of it is being sourced from the illegal mining though that is a relatively small proportion.

To meet industry use requirements, white asbestos was imported during the years 2002-03, 2003-04 and 2004-05 respectively to the tune of nearly 100,000 metric tons per year. In addition to cement, it is also used in brakes, clutch linings, and gaskets in motor cars, as well as insulation and fireproofing in buildings and warships. It is also used in electrical distribution systems, and domestic products such as ironing boards.

Following a Supreme Court order on 14 October 2003 (Writ petition (civil) 657/1995), the Union Ministry of Labour constituted a Special Committee under Chairmanship of S K Saxena, Director General, Directorate of General Factory Advice Service and Labour on the issue of medical benefits and compensation to workers affected by handling of hazardous waste, toxic in nature. The Saxena Committee's report, submitted in May 2004, mentions lung cancer and mesothelioma caused by asbestos in all work involving exposure to the risk concerned.

The Union Ministry of Mines has proposed to lift the existing ban on mining of chrysotile asbestos. On 29 April 2005 the Minister of State for Coal and Mines, Dr Dasari Narayana Rao in a written reply in the Lok Sabha said that the study of Indian Bureau of Mines (IBM) "has recommended that the ban imposed on grant and renewal of mining leases and expansion of mining may be lifted." The study recommended that the mining ban may be lifted subject to control of pollution level in work environment of various operations and other remedial measures. But as an entity, the IBM is not independent of the Ministry; it functions under the Union Ministry of Mines and Minerals.

An in-depth study conducted by Industrial Toxicology Research Centre (ITRC), Lucknow in Beawer and Deovgarh Rajasthan observed higher fibre concentrations in the milling units. All the units are belonging to unorganised sectors where technology is poor and laws and regulations are simply not in force.

On 10 March 2006, the Ministry of Mines and Minerals issued a statement saying, "IBM has been asked to work out necessary safeguards/measures in consultation with Central Pollution Control Board subject to which chrysotile asbestos mining can be permitted so as to ensure worker's safety."

The manifest support the industry appears to enjoy from the ruling United Progressive Alliance (UPA) seems illustrative of an unhealthy consensus, overall. In the meantime, research from leading Indian institutes continues to contradict the Ministry's push to lift the ban.

In an August 2005 paper published in American Journal of Industrial Medicine, titled "Occupational Asbestos Exposure and Predictable Asbestos-related Diseases in India," Dr S K Dave, Senior Deputy Director, NIOH concludes, "Based on knowledge of past and current exposures to asbestos in industry, we can predict a future occurrence of clinical asbestos-related diseases-pleural changes, pulmonary fibrosis, bronchogenic carcinoma, and diffuse malignant mesothelioma." He wrote that these cases of asbestos related disease are expected to occur in asbestos exposed workers from mining, milling, and manufacturing as well as in those with secondary exposures to asbestos-containing materials, including construction and maintenance workers, users of asbestos-containing consumer products, and the occupants of asbestos-containing buildings. Dr Dave's surveys of asbestos-exposed workers have revealed significant occupational exposures.

The NIOH was established by the Indian Council of Medical Research (ICMR), the apex body in India for the formulation, coordination and promotion of biomedical research, one of the oldest medical research bodies in the world presided over by the Union Health Minister.

An in-depth study conducted by Industrial Toxicology Research Centre (ITRC), Lucknow in Beawer and Deovgarh Rajasthan observed higher fibre concentrations in the milling units. All the units belong to the unorganised sector where technology is poor and laws and regulations are simply not in force. The ITRC team observed prevalence of asbestosis in less than five years, which is very high and alarming. ITRC is a constituent laboratory of Council of Scientific and Industrial Research (CSIR), an autonomous body associated with the Union Ministry of Education. It is dedicated to provide health safeguards to industrial and agricultural workers through its rich knowledgebase, created painstakingly over the years.

Dr Qamar Rahman, a senior scientist with ITRC and a visiting Professor at Rostock University, Germany says that on the basis of the report and recent studies conducted in the milling units, the ban on asbestos mining should not be lifted. She notes that mining and processing are the part of each other and conditions need to be improved at both the places simultaneously. "In the milling or grinding area fibre concentration is very high, workers do not use gloves, masks and protective clothing. They use primitive manual way for grinding," she says, alarmingly. The housekeeping in the units are also very bad, feels Dr Rahman.

But the Ministry of Mines chooses to ignore such suggestions in the same way as it has ignored the plight of victims of white asbestos mines in Roro Hills, Chaibasa, Jharkhand abandoned by Hyderabad Asbestos Cement Products Limited (now known as Hyderabad Industries Limited). And the Ministry of Environment says it has not received any complaint so far.

The rationale to support the continued use of this killer fiber used in over 3,000 products is glaringly hollow. It continues to devastate workers and consumers, but the extent of the tragedy remains largely uncovered in India.

Gopal Krishna works as a consultant on clean industry and comments on environmental policy issues. He is also coordinator of Ban Asbestos Network of India (BANI).