Two farmers from Chamarajanagar, Karnataka, took the state government to court for not giving them water for the past three-four years. The twist is that they approached a district consumer court, and won the case in less than a year. Veena N reports.
29 May 2006 -

In a landmark judgement in 1997, the Supreme Court ruled that water is a 'public trust' maintained and regulated by the state. Public trust implies that it will be regulated and supplied to meet everybody's needs in a fair and balanced way. In reality, however, while the government has rights to the water, it has been far from meeting its obligations on fair delivery. And on the other hand, farmers and users have not demanded their entitlements from the state very forcefully.

In 2005, farmers Prabhu and Murthy found that newly irrigated areas were receiving water whereas their old gardens and lands were being dried out.

Also, the dam had received enough water to supply them and yet, water was not being released.

On 19 January this year, in a significant ruling, a different kind of court -- the District Consumers' Disputes Redressal Forum at Chamarajanagar, Karnataka -- said that farmers who pay 'water rate' fees are consumers and government dam authorities are service providers. As such, if dam authorities fail to release water, they may be held up for deficiency of service.

This ruling comes from the efforts of two farmers in a small village  Alur  in Chamarajanagar district of Karnataka, who dared to take the state machinery to task for not releasing water to their coconut and arecanut gardens. Mahesh Prabhu and Mamatha Murthy, filed cases on 8 April 2005 and 21 September 2005 respectively against the Executive Engineer M C Chandrashekhar and Assistant Executive Engineer Satyananda of the Kabini Nala sub-division, Cauvery Neeravari Nigama, for deficiency of service in releasing the water from the Suvarnavati Dam. The then Chief Secretary of the Government of Karnataka, was also charged ex-parte in the case.

The story began in 1966 when the government decided to dam the Suvarnavati river to irrigate an additional 7,000 acres of land. The river flows near Alur village and provided water to 9,694 acres of farms and gardens. The farmers of Alur and other villages downstream protested against the damming of the river and were assured of regular water supply by the dam authorities. They agreed, the dam was built and life went on with the farmers paying the taxes, fees and rates as demanded by the authorities.

The areca, coconut and other trees in the orchard of Mamatha Murthy. Pic credit: Jayant Rao.

In the year 2002, a drought was declared in Chamarajanagar and water was not released. The water rate payment was also suspended. The same story was repeated for the next two years as well. In 2005, Prabhu and Murthy found that newly irrigated areas were receiving water whereas their old gardens and lands were being dried out. Also, the dam had received enough water to supply them and yet, water was not being released. When personal appeals, official requests and repeated pleas did not yield any result, Prabhu filed a case in April 2005 demanding that the government respect his entitlement to water. In September, Murthy, the guardian of her minor daughter's lands, did the same. Both the cases were clubbed and consolidated by the consumer forum for consideration.

The three major problems before the court were: (1) Are the two farmers consumers within the meaning of the Consumer Protection Act? (2) If so, have the government officials caused a deficiency of service as alleged? (3) Finally, to what relief are the two farmers entitled?

The court found that three kinds of charges were being collected from the farmers  betterment charges at Rs 500 per acre, maintenance cess at Rs 4 per acre, and water charges at variable rates ranging from Rs 9 to Rs 200 depending on the crop. The court noted that as per Section 44 of Karnataka Irrigation Act and Sections 3, 10 and 28 of The Karnataka Irrigation Act, 1957, betterment charges and maintenance cess were compulsory taxes collected by the government for the provision of water. 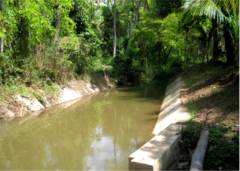 Systematic maintenance of the canal system is very important to ensure regular flow of water to the orchards. Pic credit: Jayant Rao.

However, rule 4 of the Karnataka Irrigation (Levy of Water Rate) Rules 1965, clearly stated that water rate was collected "from persons who have taken permission to use water". As such, it is not a tax, but a payment for services rendered. The service being the supply of water for irrigation. Just because the state government has declared Chamarajanagar district drought hit, and suspended collection of water rate, "it cannot be said that these complainants are not consumers," the court ruled in its judgment. Hence, the court declared the two farmers were consumers and the government was the service provider.

It was then time to open the Suvarnavati dam project documents to recall the commitments made to the people in the 1960s. It was envisaged that 1.10 TMC of water would be stored to irrigate 7,000 acres of fresh atchkat (irrigated farm land) and 9,694 acres of existing atchkat. In 2004, 1.20 TMC of water was stored in the reservoir, but water was released only to the new atchkat areas and not to the old. The engineers contended that water had not reached the petitioners as their lands were at the tailend of the canal and there was considerable sand quarrying in the river bed during the preceeding two years of drought.

However, Prabhu and Murthy produced maps to prove that they were only 25 km from the dam and not at the tailend. Farmers higher up the canal were drawing excess water, they alleged. Additionally, they also showed that the executive engineer had himself attempted to help his contractor quarry sand from the river bed. The court ruled that the engineer had failed in his duty to protect the interests of the farmers. Since Prabhu and Murthy asked for water only once or twice a month for their gardens, the court found that the state had caused deficiency in service to them.

Finally, the court came to the controversial issue of loss and compensation. Prabhu and Murthy contended that their gardens had perennial crops like coconut and arecanut in addition to annual crops like banana and sugarcane. In the case of annual crops, the loss of crop was only for a year. In the case of perennial crops like coconut and arecanut, the loss would continue for several years. Prabhu estimated his loss at Rs 4,90,000, while Murthy estimated hers at Rs 2,91,000. However, the court ruled that their loss had to be estimated by an expert or an approved valuer, and not by themselves. The AE and the EE were directed to jointly pay the two farmers a nominal amount of Rs 5,000 each for deficiency of service, Rs 1,000 each for mental torture and agony and Rs 500 each for court charges.

Murthy and Prabhu see this for what it is: victory of a principle. They have also since started getting water. The most significant thing that has happened in the months since the January 2006 ruling is that the morale of farmers in Alur itself has been boosted. Many of them are now contemplating going to court. A few have started with their paperwork. Several farmers are likely to demand their water entitlement from the government. The officials in the meantime have appealed the entire decision. But the farmers are undaunted and are preparing for the next round of battle.

"Practical problems of water flow may be solved relatively easily," Mahesh Prabhu notes. The engineer only has to maintain the canals and ensure that sand quarrying does not take place. "Water in the canal could be regulated and measured in more efficient ways to ensure that each farmer gets as much as she or he pays for and no more," says Murthy.

Veena N is a Bangalore-based freelance-researcher and writer.