Our food, our farmers

The Association for Indias Development (AID) celebrated Gandhi Jayanti (2 October) this year with an Our Food, Our Farmers global vigil organised at 18 locations across India and 39 locations in the United States. An IN-PICTURES feature.
08 October 2007 - 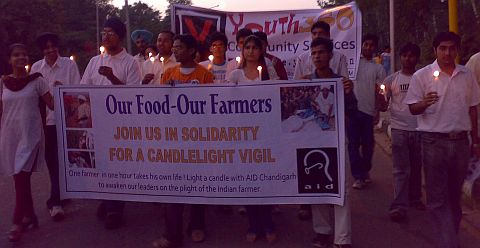 The Association for Indias Development (AID) celebrated Gandhi Jayanti (2 October) this year with an Our Food, Our Farmers global vigil organised at 18 locations across India and 39 locations in USA. According to AID, more than 3000 individuals participated in this vigil across the two countries, with one message for the Indian farmer, "We are with you."

AID is a volunteer-driven non-profit organisation promoting sustainable and equitable development in India. It has 35 chapters in the United States, 10 in India, and a few in Australia, Canada and Singapore.

The vigil was intended to highlight the agrarian crisis in India, extend support for the farmer community and demand genuinely pro-farmer policies from the government. The demands, circulated in the form of a petition, included strengthening the minimum support price system to cover the real cost of production, waiver of debt and proactive support to low input sustainable agriculture especially in rainfed areas. 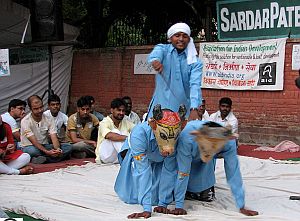 Marches, rallies and candlelight vigils marked the day. In New Delhi, two days of street plays were followed by a photo exhibition on 2 October. A few farmers from Vidarbha, Tamilnadu, Andhra Pradesh and activists from Medhiganj (U.P.) joined in. About 40 orgnisations participated in the vigil at Hyderabad. In the US, about 1000 people participated in candlelight vigils held in locations such as Seattle, San Diego, Bay Area, New York and Washington DC, as well as university campuses such as Cornell, Univ. of Texas, Univ. of MD, West Virginia University and so on.

The stirring response to an event proposed just three to four weeks before Gandhi Jayanti proves that farmers' suicides and the underlying agrarian crisis stirs the conscience of people around the world, say AID volunteers.
India Together
08 October 2007

This picture feature is based on material submitted by AID (www.aidindia.org).