REVIEWS / THE POWER OF CINEMA

The film that changed Afroza's life

Flickering Angels, a moving documentary on the lives of children of imprisoned parents in West Bengal, helps a child of an illegal immigrant caught in tragic circumstances to go back to her homeland. Shoma A Chatterji dwells on the reformative capacity of cinema.
07 October 2013 -

Can cinema trigger positive action and social rehabilitation? If, indeed, it has the power to initiate change in the lives of people, how exactly does that happen? These have been debated issues for years, and still are begging for answers. But now, what has happened in the life of Afroza, a Bangladeshi child who was repatriated from West Bengal to her home country after a long struggle, can serve as helpful evidence for those who argue for cinema as a potential change agent.

Afroza's obstacle-ridden repatriation was possible because of a moving documentary called Flickering Angels that has been selected for competition at the Utopia Film Festival, in Greenbelt, Maryland, (outside Washington DC) and at the 30th Tehran International Short Film Festival (TISFF), both in October, as well as at the Kolkata International film Festival (KIFF) in November.

Directed by Subhrajit Mitra and produced by Gaurang Films, Flickering Angels takes us on a learning journey through the lives of children of under-trial and convicted prisoners, trying to triumph over the social and financial hurdles that life has carved out for them. It narrates the real story of children ordained to live apart from their parents, clinging on to a world of dreams despite the knowledge that for most of them, these dreams will never be fulfilled.

Flickering Angels is perhaps an ideal description for this group of 6 to 16-year-old girls portrayed in the documentary, for they are truly akin to lights that are have not been fully switched on, nor been defused completely yet to live a life in total darkness. These children are now being taken care of by a home run by a group of kind-hearted nuns. Daya Bari, as the home is called, is situated in a remote area in Ranaghat, West Bengal, along the India-Bangladesh border.

During recently held DG-level talks between the Border Security Force, India and Border Guard Bangladesh at Dhaka, Sharma handed over the first copy of Flickering Angels to Major General Anwar Hussain, Director General, Border Guard, Bangladesh. He was so emotionally moved by the film that he assured Sharma he would take charge of Afrozas education till she graduated and also her marriage.

•  Will reel kill the power of real?
•  Witness to a changing world

Here, they go through the rudiments of elementary education along with training in some technical skills to equip them for financial independence later on in life. This protects them from the evils that often trail girl children of prison inmates and undertrials. West Bengal, with its porous borders on three sides, often becomes an easy hub for trafficking vulnerable girls such as these and Dayabari acts as a shield.

However, even in this sanctuary, life is not easy for these young children, marginalised for no fault of their own. As B D Sharma, IPS and Addl. DG (East), Border Security Force, and a key figure involved in organizing the rehabilitation and training of the girls at Daya Bari points out, "they carry the social stigma of their parents' imprisonment and criminalisation even when the parent has been wrongfully imprisoned for something like trying to cross the border without legal papers." Their pain and helplessness are evident in their vacant, sombre expressions until they warm up to some people from the mainstream trying to bring new meaning into their lives.

Dr. Sabyasachi Mitra, Consultant Neuropsychiatrist, echoes similar thoughts when he says "These girls are doubly handicapped by poverty and by the fact that they are identified with parents who are prison inmates and who, it is assumed, are criminals. Even worse is the position of girls who belong to Bangladesh and must be extradited on legal grounds even when they have no home to go back to. They long to belong to the mainstream and it is our duty, as open-minded citizens, to accept them into the mainstream. This will go a long way in establishing a secure future for them and by them."

Among other experts who have enriched the narrative of Flickering Angels with their comments and observations on these children are Ranvir Kumar, IPS, IG, Correctional Services, Government of West Bengal, and Justice Shri Asok Kr. Ganguly, Chairperson, West Bengal Human Rights Commission. Ganguly draws attention to the legal status of these children who are practically persona non grata and have no locus standi in society. 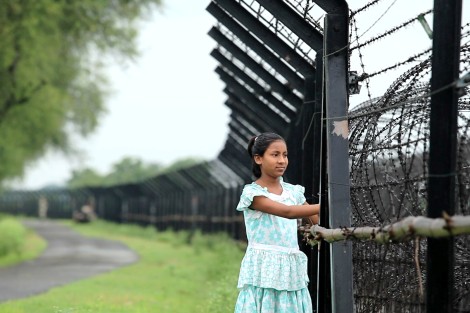 While the film focusses on a few of the forty girls living in Daya Bari, perhaps the most tragic story was that of Afroza. She was just five years old in 2009 when her mother, Manowara Begum was arrested while crossing the Bangladesh-India border illegally. Manowara died serving her prison term. No one knew where the father was. Afroza's brother Munna was sent back to Bangladesh in 2011 but it was difficult to repatriate Afroza.

Sharma, who takes personal care of each of these children and monitors their progress every now and then through personal visits says, "We arranged (for) the admission of Afroza under the 'Cottage Scheme' through the Directorate of Social Welfare, Govt of West Bengal for her education, lodging and rehabilitation at Daya Bari run by the Sisters of Charity of Saint B. Capitation V. Gerosa, based in Kolkata.". He also points out that it was not easy because Afroza was a foreigner and red tape came in the way of her admission to any Indian mainstream school.

During recently held DG-level talks between the Border Security Force, India and Border Guard Bangladesh at Dhaka, Sharma handed over the first copy of Flickering Angels to Major General Anwar Hussain, Director General, Border Guard, Bangladesh requesting him for the safe repatriation of the child to her native place. Hussain was touched. He was so emotionally moved by the film that he assured Sharma he would take charge of Afroza's education till she graduated and also her marriage.

Afroza was officially repatriated to Dhaka on 14 September, 2013 accompanied by Sharma. When the latter had informed the West Bengal Human Rights Commission about the death of Manowara Begum, the commission had awarded a compensation of Rs.150,000 each to Afroza and her brother Munna Pervez for their mother's custodial death at Berhampore. The money was handed over to her at the time of her repatriation.

"The story of Afroza will go a long way in promoting mutual friendship and understanding between India and Bangladesh. It will also hopefully reinforce the basic rights of all children of the entire world regardless of their nationality, religion, caste and creed," sums up Sharma.

Flickering Angels is an optimistic film filled with hope because the brief narratives of the little girls' lives are often punctuated by a look at people who really care for them. Afroza's story in itself is a sterling example of the power of cinema in changing lives and mindsets. Afroza, who hardly smiled or talked while at Daya Bari, is smiling at last. What could have been a happier ending for a film?