Why do so few adoptions take place each year? Recognising some of the barriers to adoption from her own experience, Vinita Bhargava decided to research this question. Swapna Majumdar finds the answers informative and reassuring, and that they bring a complex conversation into much-needed public light.
23 October 2005 -

When Vinita Bhargava thought about adopting a child 16 years ago, she faced stiff opposition - not from her family or her in-laws, but from her own self. She wondered whether she would be able to love someone else's child as her own.

Not many people understood why Bhargava adopted a child, especially since she already had a child of her own. Relatives wanted to know whether there was a difference in her love for her biological son and adopted daughter. It was queries like these and a myriad issues related to adoption that prompted Bhargava, Head of the Child Development Department, Lady Irwin College, New Delhi, to wonder why adoption was such a touchy issue.

The book, Adoption in India: Policies and Experiences was born out this curiosity. Recently published by Sage Publications, the book combines academia well with stories of parents and adopted children and their trials and tribulations. By examining some of the issues that impinge upon the development of an adopted child in the socio-economic and cultural context, this book is able to provide answers to several doubts that arise in the minds of potential parents of adopted children. 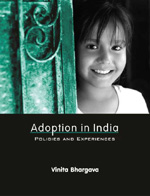 "The whole book has been a journey of love for me. I think what every parent wants to know is whether they have succeeded in becoming good parents. The biggest indication of this is whether or not the child is happy in being a part of the family. If the answer to this question is yes, then, as parents, we've done what we set out to do. But the answer is not always in the affirmative. Adopted children may not always adjust or the parents may not be able to fully accept the adopted child," says Bhargava.

Adoption has always been considered a wonderful opportunity to give a child a home and parents a child. Statistics show that there has been a five-fold increase in adoptions in India in a period of 15 years. However, despite the rise in the number of adoptions from a mere 398 in-country adoptions in 1988 to 1949 adoptions in 2003, the practice has been shrouded in secrecy.

Bhargava, who researched 53 families, revealed that it was difficult to convince many parents of adopted children to narrate their stories or get permission to speak to the children. One of the primary reasons for this is fear of intrusion by an outsider who could stir a hornet's nest with insensitive questioning. This was especially so in cases where parents had not yet revealed the adoptive status to their children. But Bhargava's status as an adoptive parent herself opened doors for her and enabled her to understand the various dimensions of adoption from the viewpoint of a social scientist.

Another reason for parental wish for confidentiality stems from a lack of supportive documentation to address dilemmas like whether heredity is more important than environment. This is because the subject of adoption has not been considered important enough for in-depth research in India. However, the theme of adoption has been a popular subject for films and television, both of which are powerful instruments of information and misinformation.

Bhargava discovered during her study that more than positive and sensitive portrayals of adoption, potential parents tend to remember Hindi feature films where heredity problems cannot be overcome by a change of environment. Parents often quote the popular film theme of child of a crook being switched with a child of a police officer. Here, the child of a crook, despite being raised by a police officer, retains criminal tendencies. The police officer's child, on the other hand, despite being raised by a crook, is honest and law-abiding.

Nevertheless, more couples are coming forward to adopt children. A close look at the data on adoptive parents reveals that inability to have biological children leads to adoption. It is primarily the woman's need for a child that initiates a search. The desire of men to adopt is rare. Loneliness, a lack of purpose, the fear of old age without children are the reasons given for wanting a child.

Bhargava found during her research that more couples are opting to adopt from outside the family. As one of the women interviewed by Bhargava said, "My mother-in-law was very keen that I adopt my sister-in-law's child. There was a lot of pressure from relatives to adopt this child. I did not want to adopt from relatives because they would always have control over the child."

The theme of adoption has been a popular subject for films and television, both of which are powerful instruments of information and misinformation.

But most people who walk into an agency with the notion that several children would be shown to them for them to choose are shocked when only one child is shown. The agency makes them fill registration forms stating their preferences in terms of age, sex and health of a child. The task of matching a child with the family is done by the agency.

But this procedure leads to greater tension. According to an adoptive parent, they have to continually prove to others that they are good parents. Starting from the home study that an agency does, the certificates they have to submit, the appearance in court; and all through the period of child care - they feel as if they are being watched and judged on tasks other parents take for granted and need not worry about.

This worry apart, even if the agency manages to match a child with respect to the preferences stated by the adoptive parents, compatibility is not guaranteed. In fact, disclosure of the adoptive status of the child sometimes creates great friction and conflict. Desire to hunt for their biological parents or a sense of loss is a natural outcome once children are told they are adopted. But how do parents come to terms with these disturbing developments? What about the adopted children? How do they cope? What role can an extended family or the school play?

These are some of the questions that Bhargava tackles sensitively with narratives of adopted children and their parent. By bringing these fears out in the open, the book will help other parents understand that they were not only ones facing difficult choices. She also points to solutions by way of counselling for parents before and after adoption. Peer counselling for adopted children and the formation of support groups of adoptive parents can also redress some of the problems.

Over the last decade, although the male child is still preferred, the number of families that have registered to adopt a baby girl has gone up. Couples who want a male child have to wait for three to four years while the waiting period for families who prefer girls is no more than six months. However, the notion that fair is beautiful and fair is class has impeded the adoption of dark complexioned babies or those who have flat noses in the belief that these babies were born to parents of an inferior caste and class. Unless this mindset changes, the many children who have no say in their physical appearance will continue to languish in institutions, longing for a home and a loving family. (Courtesy: Women's Feature Service)

Swapna Majumdar is a Delhi based journalist for more than 15 years of experience. She writes on issues like gender and politics, education and population.

CHANGEMAKERS : A fuller picture of ourselves
MORE ARTICLES
on similar topics ...
BOOKS