A 3-acre pond dug in the Yenepoya Medical College 15 kms from Mangalore is catching run-off from about 15 acres of the campus and from an equal area of their neighbourhood. It has already saved the institution a substantial sum on getting water from outside. Shree Padre reports.
14 February 2008 -

The Dakshina Kannada district of Karnataka enjoys highest rainfall in the State. Its annual average of 4000 mms makes 1.6 lakh liters per acre. Yet, this medical college that has a sprawling campus of 33 acres had to bring water from outside for 8 months a year! Though they were using their own tankers to bring water, monthly expenditure came to around 6 lakh rupees.

This is the story of Yenepoya Medical and Dental College at Deralakatte, 15 kilometres away from Mangalore. Deralakatte, Konaje and Mudipu, adjoining areas on laterite hilltops, have in the recent past attracted many big institutions - Mangalore University, three medical colleges and Navodaya residential high School. Buildings, inhabitations and floating population have suddenly jumped high. Groundwater use has increased multifold. Water scarcity has turned serious. Very shortly, an complex for the software-major Infosys is to come up here on hundreds of acres of land. 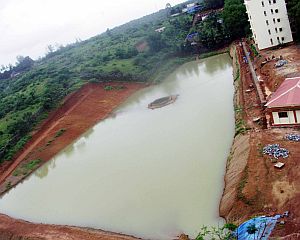 Yenepoya Medical College's rain pond of 3-crore litres capacity, with an open-well at the centre, is full during the 2007 monsoons. Pic: Yenepoya.

Thankfully, a massive and project of catching rain, foremost in this area, has been implemented at Yenepoya. A 3-acre pond dug at the lowest elevation was completed before the 2007 monsoon. This pond catches run-off from about 15 acres of the campus and from an equal area of their neighbourhood. It has a capacity to hold 3 crore litres of rain. " Just a week after the onset of monsoon, this started overflowing", recalls Narayana Bhat, Yenepoya's project manager.

Adds he, "When we bought the land in way back 1995, a small stream was flowing upto March. I remember washing my face with its crystal clear water." P K Thampi, consultant of this project, a retired geologist from Trivandrum selected this spot for the rain pond construction. On the lower elevation of the pond, a huge embankment - bund - is built using soil. To cut-off the seepage, A LDPE sheet, 500 gsm (grams per square meter) was inserted into the deep trench dug in the middle of the bund. It touches the hard rock layer below. The erosion-prone sloppy portions of the pond are protected by a lining of coir geo-textiles.

Interestingly, water is not pumped directly from the pond. In the middle, there was an old open well, 35 feet in depth. It is retained there. Though the stored rainwater is a little reddish in the beginning, the well water, well filtered by the soil around remained crystal clear.

The campus has two Colleges - Medical and Dental, hospitals and hostels. Student strength is 1000. Two yielding bore wells provide about 10,000 litres an hour each. The yield comes down in the summer. Daily fresh water requirement comes to 4 lakh litres.

Yenepoya is a pioneer in water reuse and rain water harvesting would do better by starting a planned awareness campaign to sensitise its students, staff and visitors about water conservation.

This would have gone double but for the water reuse being done in a big way. The campus has two sewage treatment plants. Since its inception in 1999, all the used water from hostels, quarters etc is treated and pumped back. Total daily output from two plants is about 4 lakh litres. This is used for irrigation and toilet flushing. As such, fresh water is seldom required for these purposes. Apart from these, an areca plantation, important cash crop of the district, is coming up using this treated water. "We use only the manure produced in the treatment plants and nothing else", points out horticulture assistance Vasanth, "it appears as if it provides all the required nutrients."

This year, for the first time, they could give nearly half a year rest for the bore wells. For the first time in the last 9 years, they weren't used from the monsoon onset up to November 15. Outsourcing of water was delayed by 7 weeks. (The rain pond still has some water and the open well is now yielding only about 60,000 litres a day.)

But there is a practical problem. The open well is at a higher position than the deeper portions of this pond. As there is bed rock at the bottom of the open well, it can't be easily deepened. "I am going to suggest a deeper extraction well at the deepest part of the pond", says P K Thampi, "so that it can not only extract the water in the tank but the water seeping from the sides."

The new earthen bund's height decreases after about a year. This is due to seasoning and compacting of the lose soil. Next year, this will be raised by another one meter by giving an additional LDPE sheet and putting more soil on the top of the bund. That would store one crore litres more water. These two steps would considerably increase the availability of water. According to Thampi, "once the pond is stabilized it should support their total water demand up to the end of March in 2009."

What's this stabilisation? "Since we dig deep for the pond in summer," explains he, "existing water from all the four sides flows into that. The water table in that area would be considerably lowered. Next year, once the pond fills up, outflow starts in a similar way. The water table would increase." One more hydrological cycle - that's two monsoons - is needed for the pond to stabilize, says Thampi. In summer, apart from the stored rainwater, there will be inflow into the pond. "As such, with such rain ponds you get two way benefits - the storage and recharge. The situation may further improve, if there are some summer showers," he notes. 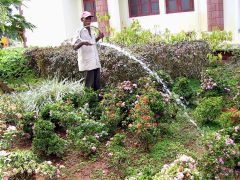 Only recycled water is used for irrigation and toilet flushing. Pic: Shree Padre.

Constructed at a cost of Rs.25 lakhs, by delaying bringing outside water for seven weeks, the pond has already paid back 10 lakh rupees. By next year, it is hoped to return the full expenditure. Hopes Bhat, "In another 2 to 3 years, we would be self-sufficient in water." But there is one area yet to be addressed. Day today water consumption goes on without restraint.

Yenepoya, a pioneer in water reuse and rain water harvesting would do better by starting a planned awareness campaign to sensitise its students, staff and visitors about water conservation. As a part of this, an audio-visual on it's efforts in these fields and the existing water scarcity outside the campus could be screened. Water saving devices need to be encouraged. Students' prospectus, brochures and other campus literatures can carry these messages effectively. Each incoming batch of students may be taken around and made to understand the importance of water. This move, in the long run would not only help the institution, but the society at large too as it is producing future doctors whose advice will always carry weight.

Increase in pumping groundwater is depleting this belt of its aquifers very fast. Manjanady, an ordinary village just 5 kilometers away is just one example. For the last three years, this village has had to supply with tanker water. The danger light of drought has already on. Unfortunately, most of the people are blind or conveniently pretend so towards it.

Yenepoya offers a sustainable model of solution for the water crisis, especially for large campuses, housing colonies and factories which have a spacious watershed that drives good amount of its run-off to a common point.

The nearby K S Hegde Medical Academy (KSHEMA) and PA College of Engineering have reportedly started reusing water after purification. It's high time the big institutions in this area start addressing the water scarcity in a sustainable way. "There is solution to suit any condition, but they have to be site-specific," points out Thampi.