Walk on the road, legally

With the decision to turn an important commercial road in the city into a walking plaza on weekends, Pune is reaping a healthier urban environment as well as a popular public space. Vinita Deshmukh reports that the early opposition from some quarters has given way, as more people take to the street.
18 May 2006 -

Recently, a plea for justice in the Jessica Lall murder case manifested in a candlelight procession on Pune's premier thoroughfare and commercial street, Mahatma Gandhi Road. For a change, none of the participants had to be anxious about vehicles brushing past them, the event being staged on a Saturday evening, when this arterial road turns into a vehicle-free zone and is re-christened 'walking plaza'.

Welcome to an oasis of hope for pedestrians in Pune. For a city which is choked with about 14 lakh vehicles, thanks to its rickety and inadequate public transport system that propels 400 new registrations of private vehicles at the Regional Transport Office (RTO) every day, any respite from vehicular atrocity comes as a whiff of fresh air. The vehicle-free zone concept, adopted in several cities in Europe and the USA - where the theory of roads for citizens and not only for vehicles has gained acceptance - was launched on January 28 in Pune on a trial basis. Thanks to the overwhelming support of citizens, the walking plaza - between 4 p m and 10 p m on Saturdays and Sundays - has been declared permanent recently by the Pune Cantonment Board.

When it was first launched, the idea seemed to be on a shaky ground, with vehement protests from shopkeepers who fumed that their businesses on Saturdays dipped by 80 per cent. "Only casual strollers visit M G Road on Saturdays", stated a prominent member of the shopkeepers' association, and demanded the withdrawal of this experiment. However, says Brig J S Kohli, sub-area commander and the President of the Pune Cantonment Board (PCB) who was determined to make this a success, "We had kept a vote box to understand the pulse of the citizens and we found that more than 80 per cent of them appreciated the idea. As more and more citizens began patronizing the walking plaza, it compelled the shopkeepers to do a turnaround and keep their shops open. Initially, 80 per cent of the shops had downed their shutters to protest against this concept."

So, what prompted this idea in a city where closing a road for even an hour can throw the traffic awry? It was a combination of the Supreme Court's directive to clean Pune's air and a campaign by environmentalists led by Pune's INTACH chapter to have certain roads free of vehicles.

Pune won the dubious distinction of being amongst 16 most polluted cities in the country, based on a study carried out by the Central Pollution Control Board (CPCB) in 2003. This led to the formation of a committee under Bhure Lal, which is monitoring the air of all the pollution-labelled cities, including that of Pune. During a review meeting in October 2005 of the Bhure Lal Committee with the stakeholders in Pune, which included municipal corporations, committee member Sunita Narain urged the municipal commissioner to try and make the M G Road (under the Pune Cantonment Board) and the Laxmi Road (under the Pune Municipal Corporation) pedestrian zones, at least during festivals. Already, on the request of city environmentalists, the then Army Commander, Lt Gen B S Takhar had publicly declared in January 2005 the PCB's intention to make M G Road into a walking plaza.

•  Future of Pune's transport
•  Emphasis on mixed use needed

To further make the case strong for a permanent walking plaza, the PCB asked the Maharashtra Pollution Control Board (MPCB) to conduct a sound and air pollution test during the walking plaza hours in contrast with the normal hours. The findings revealed 40-50 per cent dip in air pollution and 32-40 per cent decrease in the sound decibel level. (see box for details).

It still took a full year after the army commander had declared his intentions to implement the decision. Bhaskar Reddy, Chief Executive Officer of the PCB, says this was possible after several rounds of brainstorming sessions with local councillors, shopkeepers and citizens. A lot of groundwork had to be done. Elaborating further, he says, "We improved the conditions of the M G Road as well as of the neighbouring roads. The role of private-public partnerships was crucial, and the beautification of the Tarapore Road (which runs adjacent to the M G Road) is an example. Parking space around M G Road was augmented with pay and park schemes; footpaths, lighting and re-surfacing of the road was then done to make the stroll pleasant for citizens."

Around 10,000 to 20,000 Puneites patronize the walking plaza during weekends. It's rendezvous time here for families and friends as they chatter along in this oasis of freedom and relaxation. Cartoon characters dance to the tune of the children's moods, trees are decorated with festive lights, and shops are soon attracting crowds. Instead of the blaring of the horns and the fumes of vehicles, you hear laughter and joy. The shopkeepers have stopped grumbling. The PCB and the police have got a pat on their backs for causing minimum inconvenience to commuters in the adjoining roads of M G Road, during the walking plaza hours. Creativity and innovation have become hallmarks of the plaza. An art gallery on the roadside depicting Pune of yesteryears, organizing story telling competition for children and staging plays of social relevance has added more pep to the entire experience.

The Pune Cantonment Board has let out the management of the walking plaza to an event management company, which is duty bound to ensure that vehicles parked on M G Road are towed away; put up barricades on either side of the walking plaza, and appoint sweepers to continuously sweep the roads. The first event management company withdrew, now another one has signed a contract by which it will pay six lakh rupees to the PCB per annum as rent. The event manager has been allowed by the PCB to generate revenue by asking advertisers to display their products. For this the PCB has allocated 10 spots on the M G Road for advertisement displays. 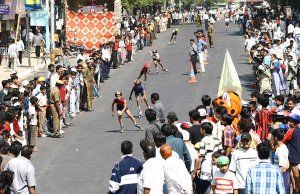 With vehicles off the road, a number of other uses have sprung up.

However, there are a couple of glitches too. While people can be seen leisurely sitting on the edge of the footpaths, some enterprising eateries have put up chairs and tables on the footpaths. While the PCB has not raised any objection, the police say it's encroachment on the road. Says Reddy, "They don't understand this concept where people should enjoy the walking plaza to the fullest, so why not have the pleasure of relaxing outside the eatery, like the way you see in some European countries? We've held a top level meeting with the police and hope to resolve the matter."

Spurred by the success of the M G Road experiment, the Khadki Cantonment Board, which has a congested main street, is also geared up to make it into a walking plaza from the end of this month. (Pune has three cantonment boards  Pune, Khadki and Dehu). The Pune Municipal Corporation too desires to make Laxmi Road, a premier commercial street, into a walking plaza but it has to cope with opposition from local councillors who are too mindful of alienating their vote bank at the moment, with corporation elections are scheduled for early 2007.