Rescue operations carried out with tactful involvement of media and the police can offer victims protection from further trauma, and also begin to sensitise a number of people on the complex issues involved. Kirti Mishra reports on the experiences and learning of Odanadi Seva Samsthe.
13 July 2006 -

Karnataka has been identified by an annual publication of the U.S Department of State - the "Trafficking in Persons Report" (2003) as one of the major supply states for human trafficking in India. According to V.S Malimath, member of the National Human Rights Commission, about 80 percent of those prostituted in Mumbai and Goa come from Karnataka. Within the state, it is the rural population, particularly poor dalits, over whom the traffickers' network has its stronghold. The dalits of Tumkur, the tribals of H D Kote, Hunsur and those from Coorg's tribal belts have been identified as particularly vulnerable.

While poverty is a crucial contributing factor for the rise from supply side, socio-cultural practices specific to the region are also responsible for injustices against minors, young girls and women. Despite the strong Devadasi Prohibition Act of 1982, prostitution under the garb of religion continues to exist in Northern districts such as Bijapur and Shimoga, in the form of female offering to gods and goddesses. Trafficking related to prostitution is particularly difficult to tackle, since it is a highly organised affair, which uses the resources and networks of other organised crimes. Besides, it involves a long invisible chain of transporters and hoteliers who provide transport and accommodation during transit, brothel keepers, agents and traders who deliver the girls to the brothels.

But trafficking is not limited to prostitution alone, but also for purposes like forced labour, commercial gay and lesbian relationships, to hire wombs, and for illegal marriages, domestic slavery, organ transplantation, for begging and even for camel races.

Odanadi Seva Samsthe is a Mysore-based organisation that undertakes rescue operations to free trafficked persons from the criminal clutches into which they have fallen. The major focus of its rescue operations is to prevent trafficking of minor girls and women, and to ensure the arrest of traffickers under most stringent laws so that they do not go scot-free.

Several rescue efforts take place in the presence of social workers, artists and noted personalities who are respected in society. This is done to lend credibility to the rescue operations in the eyes of the law and the public.

The organisation has a strong network at the grassroots, comprising of field activists and animators who gather detailed information on suspects and closely monitor them, after building a rapport with them. After triangulating the information, careful planning for the rescue operation is undertaken by the organisation heads. The minimum duration of one operation is 15 to 20 days (inclusive of the planning, strategising, actual rescue, followed by initial legal proceedings). The rescue team comprises mainly of the organisation heads, some field animators/activists, videographer/photographer and volunteers depending on the need. Given the uncertainties involved in rescue operation, the team innovates on its strategies and uses its best judgement to decide on a course of action.

Several of these rescue efforts take place in the presence of social workers, artists and noted personalities who are respected in society. This is done to lend credibility to the rescue operations in the eyes of the law and the public. Besides, Odanadi makes an effort to sensitize the media and draws support from like-minded people. These together contribute towards the success of its operations. According to 'Odanadi - The Soulmate', a leaflet of the organization, the group has so far 'busted 35 trafficking networks, rescued 1,230 women and rehabilitated them with alternative livelihood, freed 650 minors ... in Karnataka, and as many as 550 children have been reintegrated with their families'.

Odanadi's rescue team is strong in evidence collection methods. Often it sets up decoy customers to catch the suspect red-handed while striking a deal (this is because the onus of proving the crime lies on Odanadi). CDs, VCDs, alcohol, drugs, condoms, money collected from the site (the notes bear numbers written by the decoy customer and helps in proving that a deal was indeed struck pertaining to sale/use of children/girls) are important evidences for prosecution of the cases. A person using handicam/camera who records the proceeding of the entire rescue operation also accompanies the rescue team. This serves as important evidence in the later stage of prosecution.

According to K V Stanly, the organisation's Director, "the basic minimum is to do what is in victim's best interest".

These measures are taken to help the victim in giving fair testimony. Later, wherever possible, the victim is prepared through mock trials for giving statements in the court. In several rescue cases, particularly of minors, Odanadi ensures that medical examination (for age verification) of the rescued takes place within 2-3 days as it provides substantive ground for arresting the accused. The parents of the rescued are informed soon after the rescue operation. 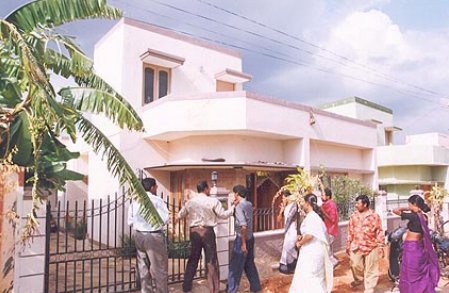 A rescue operation in progress

Odanadi also tactfully involves other stakeholders in the rescue work. It involves both the police and the media in different capacities. The media's engagement in the rescue operation is in the form of coverage of the rescue operation, and through wider dissemination of the stories of trafficking for generating awareness and initiating debates on the issue in the society. The police are informed when the rescue team is on its way to the site, and are needed to arrest the accused red-handed. The organisation's efforts towards building public pressure and sensitisation of law enforcement agencies on trafficking issues through its workshops and seminars have created a strong image of the organisation and contributed towards increased responsiveness.

Still, support varies from case to case and is yet to be institutionalised. A major blockade in coordination with the police exists due to absence of any legal sanction to the concept of Social Policing in India. This gives rise to the perception that the rescue work is an encroachment of the authority of police.

Physical and other threats

The rescue work is potentially dangerous as it involves dislodging the status quo in society and exposes the rescue team to threats from the accused who have money and muscle power and political connections. Several of the rescues have unearthed people in high position involved in crimes against minor girls and women. There are instances of a head constable running a brothel; a lady teacher of a reputed institution who had sold two girls to an estate owner in Coorg; a physical instructor of a renowned convent who had taken blue-films of a minor girl and later sold her into prostitution; a doctor who raped a minor girl in a brothel; and a cinema actress engaged in the flesh trade. In several cases such revelations have resulted in physical assault on Odanadi workers, threats, harassment and ill treatment of the complainant by police insisting to delete the name of the culprit, promises of donations; and other pressure tactics.

Harassment also comes in the form of false cases lodged by the accused against the organisation. At present, there are some 36 odd cases filed against them for trespassing (as the rescue work involves entering the house), kidnapping (as rescue work involves taking the trafficker from one place to another) and attempt to murder/mishandling (sometimes the victim's parents get disturbed on seeing the trafficker and beat him up). According to them, there is plenty of scope in the law for traffickers to file false cases in connivance with corrupt police staff against the rescue teams. According to Mr Parshuram, this is a severe drain of their resources and time. It requires frequent visits to the district and high courts, furnishing documents, and making the rounds of lawyers. It has also resulted in restriction on their mobility, as the passports of the directors are surrendered in the court.

Poor cooperation from law enforcement agencies makes things all the more challenging. For example, the two directors have been falsely charged in a sexual abuse case, of the very victim they had rescued. The case is one of its kinds in India as it involves a disabled minor (with slow brain functioning) who was prostituted for 7-8 years before being rescued from a brothel. The FIR did not mention the child's medical condition nor did the Public Prosecutor probe it in detail and argue the case. Getting information from the child was very difficult and she twice refused medical examination by the doctors, resulting in almost 24 hours delay for the entire examination. Odanadi has therefore approached the Disability Commission to seek support in this case.

Based on Odanadi's rescue operations, nearly 190 cases have been registered against the accused and 42 accused have been convicted over a period of time. These numbers are much smaller than the actual rescue operations themselves, but 90% of accused persons have managed to get bail, and the eventual conviction rate is quite low. There are several reasons that have led to high acquittal and low rate of conviction. These include:

Odanadi's work has identified key challenges that must still be overcome, to tackle trafficking. Advocacy against the crimes must be stronger at the national level, in particular. Working with coalitions of pressure groups, such organisations will need to ensure that ending human trafficking gets on the agenda of the government, and there's political will to address it at policy level and through reform of existing laws.

The tactful approach of Odanadi in dealing with the police and making them accountable shows a matured understanding of the system and of the strength of civil society and its limitations. Since police are important stakeholders in actions against human trafficking, stronger initiatives have to be taken towards institutionalising support from this department. Sensitisation programmes for the police are also needed, and these must be made into practical modules such as 'how to deal with the rescued'. Such training can also ensure that evidence collected is stronger, thus making the public prosecutors' jobs easier too.
Kirti Mishra
13 July 2006

Kirti Mishra is associated with Development Support Team, Haryana. The article was written in course of an evaluation for Action against Trafficking and Sexual Exploitation of Children, ATSEC India in May-June 2006.