Within in the next two years, around 10 lakh people will die because of smoking in India alone, says one of the most comprehensive studies on the habit in the country. India is on the threshold of a tobacco-unleashed epidemic, says Ramesh Menon.
20 February 2008 -

When you light a cigarette the next time, think again. India is sitting over a tobacco epidemic. This is a health hazard we could well have done without. A new study done by the Centre for Global Health Research at the University of Toronto, Canada, has come out with the startling finding that India is poised to lose a million Indians in another 24 months. It will have tragic social and economic consequences. 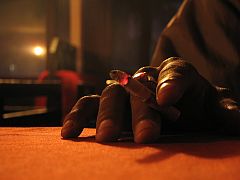 Of those destined to die due to smoking, 70 per cent would be not old enough to have died. One in five of all male deaths and one in 20 of all female deaths would be between the ages of 30 to 69. They are more likely to die when compared with non-smokers.

There is no figure on how many die today. According to the World Health Organization, (WHO) India is home to 12 per cent of the world's smokers. While there was an increase in urbanites lighting up, those who had the determination to quit smoking was just two per cent.

The study, "A Nationally Representative Case-Control Study of Smoking and Death in India," is one of the most comprehensive ones on what smoking can do with the health scenario in India. Scientists jointly did it from India, Canada and the United Kingdom. The study covered as many as 1.1 million homes across India and involved 900 field workers. The smoking histories of 74,000 who had died were studied. It says that men who smoke bidis lose six years of average life while women lose eight. Men who smoke cigarettes lose ten years.

"A cigarette is the only consumer product which kills its consumer."

•  Out from movie screens
•  Blowing back the smoke

"India is in the midst of a catastrophic epidemic of smoking deaths," says Prabhat Jha, lead author of the study who is from the Centre for Global Health Research, Canada. Contrary to the well-held belief that cancer is the major cause of smoking related deaths, the study says that 38 per cent of deaths are due to tuberculosis. Cancer accounts for only 32 per cent. Points out Dr Gro Harlem Brundtland, Director General Emeritus, World Health Organization: "It is rare to find examples that match tobacco's programmed trail of death and destruction. A cigarette is the only consumer product which kills its consumer."

Union Health Minister, A Ramadoss, says he is alarmed by the study as India today has 60 crore people who are under 30 making India one of the youngest countries in the world. "The young are our national assets and they must be protected against tobacco. We are strengthening our Tobacco Regulatory Authority to enforce strict anti-tobacco laws," he said.

Ramadoss who has been a great votary of banning smoking in public spaces, now wants the finance ministry to increase tax on all tobacco products. Shooting off a letter to the Finance Minister, P Chidambaram, he sought an increase in the rate of excise duty for cigarettes and bidis. At the moment, gutka manufacturers pay a tax of Rs. 12 lakh a month per packaging machine. Ramadoss wants the government to tax them on every pouch manufactured. Gutka has become a major addiction in both rural and urban India with young children even consuming it. Usually cigarettes get taxed, but not bidis. But Ramdoss is now arguing that bidis are consumed by the poor and should be taxed to discourage its use.

Nicotine is the main culprit. It is dangerous to the health of a smoker. It is found naturally in tobacco. Once you have it, you want it again. And again.

Nicotine enters the body as tiny droplets riding on tar particles in cigarette smoke. When you inhale your puff, the drug enters your bloodstream racing to the brain within 10 seconds! In another five to ten seconds, it has spread to all parts of the body.

Nicotine also aids in raising both your heart rate and blood pressure. You feel alert and relaxed. You tell yourself that it was worth the smoke when in less than 30 minutes, you again feel edgy and restless. This is because the high of nicotine is wearing off.

Over course of time, you need more and more cigarettes to give you that high and satisfy your craving.

Cigarette smoke can have severe risk

Ramadoss is also a vocal votary of pictorial warnings on all tobacco products. Cigarette companies have virulently lobbied against it. So have film makers and film starts who were called upon by Ramadoss to give up smoking as many youngsters, he felt, used to start smoking looking at their star icons. Jha firmly believes that pictorial displays of the dangers of smoking are more effective.

Pictorial warnings may make a difference especially when an illiterate populace cannot read statutory warnings that are there today. It is well known that many smokers are not literate and are from the poorest classes of society. There is a clear vicious link between tobacco and poverty. Tobacco makes the life of the poor much worse as money is spent on it instead of food, education and health care. "It is the poor who bear most of the economic and disease burden of tobacco use," says Dr. Samlee Plianbangchang, Regional Director, World Health Organization-South East Asian Region.

Worldwide, tobacco kills over 11,000 a day! Around 5.4 million people die prematurely due to tobacco related illness. According to WHO estimates, the figure will rise to around 8.3 million in another 22 years. About 80 per cent of those will come from low and middle-income nations that will pay a heavy price in terms of financial and social costs. More than half of the world's smokers today live in 15 such countries like India, Bangladesh, Russia, China and Indonesia. 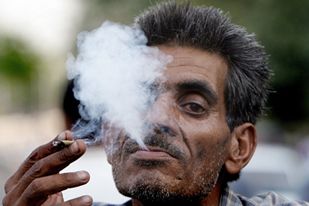 The WHO feels that building human and institutional capacity would be a major challenge for tobacco control. But, it says, few countries have the infrastructure that will enable them to implement the comprehensive measures needed to create a significant reduction in tobacco use. Some of these measures are: well-designed public health messages, celebrity-driven awareness campaigns, sustained nicotine replacement therapies, screening students for tobacco use and providing counseling, and setting up more rehabilitation centers for those wanting to quit.

After years of campaigning against tobacco, its use has declined in some countries like the United States, Canada and other developed countries. But in the developing world, it has only worsened with the death toll from its addiction only worsening.

Smoking in India is seen as a sign of upward mobility or manliness. That is what Ramadoss thought when he asked Bollywood star Sharukh not to smoke on screen so as to set an example. As the economy grows and disposable incomes rise, the tendency is for people to look for new idioms like smoking. Generally, smokers tend to move to premium brands as they prosper and not quit.

Passive smoking is as dangerous. It could lead to eye irritation, cough, headache, sore throat and cough. So, you are not safe even if you do not smoke and are working or living in an environment where there are other smokers smoking.

Doctors warn that smoking increases the level of poisonous carbon monoxide in the lungs. It gets quickly absorbed by the blood affecting its capacity to carry oxygen. It strains the smoker even more as the heart has to work harder. High levels of carbon monoxide in the blood can impair vision, perception of time and coordination. Smokers are more likely to develop respiratory ailments, thickening of the arteries, blood clots, and cancer of the lung, cervix, larynx, mouth, esophagus, bladder, pancreas and kidneys. It could also lead to impotence.

B Singh, a Delhi based photographer, felt that his appetite improved and his energy levels increased soon after he quit smoking. His skin also showed improvement. Most smokers feel like quitting, but just cannot as they are addicted to the nicotine and go back even after quitting as the craving is so high. (See box above on nicotine).

It is essential that both the mind and body work in tandem if you want to quit smoking, as the craving is both psychological and physiological. Many quit after seeing a relative or office colleague get a stroke or be struck by cancer. But after a period of time, they just give in to temptation of just one cigarette and then it overflows into more and more. The faster smokers quit, the healthier they would be. More importantly, they have a chance of living longer.

Ramesh Menon is a journalist and documentary film maker. He received the 2006 Ramnath Goenka Award for Excellence In Journalism for an article in India Together in which he reported on pesticide poisoning in Punjab.