Female and fearful In Mamatas Bengal

Character assassination, social and economic ostracisation and even assault, seem to have become the standard responses to all who protest against the culture of violence against women in West Bengal. Shikha Mukerjee reports on the ground realities in the state.
14 July 2013 -

Kamduni, a village 25 kilometres from Kolkata, has become representative of the modes of intimidation against women that is now routine in West Bengal. The people here have learnt the hard way that they must “shut up” or else be branded as agent provocateurs by the ruling regime. Protest, no matter how spontaneous, is perceived as a hostile offence against the person of the chief minister, Mamata Banerjee. Therefore, it must be put down  not just by the police but by even more aggressive flag bearing functionaries of Trinamool Congress Party (TMC) on noisy motorbikes.

Take this recent incident. When the women of Kamduni sought a reassurance from Banerjee, who was visiting the area ostensibly to show her concern over the gang rape and murder of a 20-year-old college student of the village, no one bothered to listen to them. Later, TMC’s party machinery identified three women, Mita Kayal, Mousumi Kayal and Tumpa Kayal, as the ringleaders who had offended their ‘didi’.

The women had wanted justice; what they got was intimidation. They were named and shamed as “agents” of the Communist Party of India-Marxist (CPI-M) and the Maoists, and are very likely to be investigated by the police, who had promptly turned up to follow up on this “incident”, a day after Banerjee’s visit. Instead of a return to calm, Kamduni’s inhabitants now have to contend with a vigilante group operating out of a makeshift watch station bearing fluttering TMC flags. So great is the fear of this group that villagers prefer to remain indoors to avoid being detected and attacked. 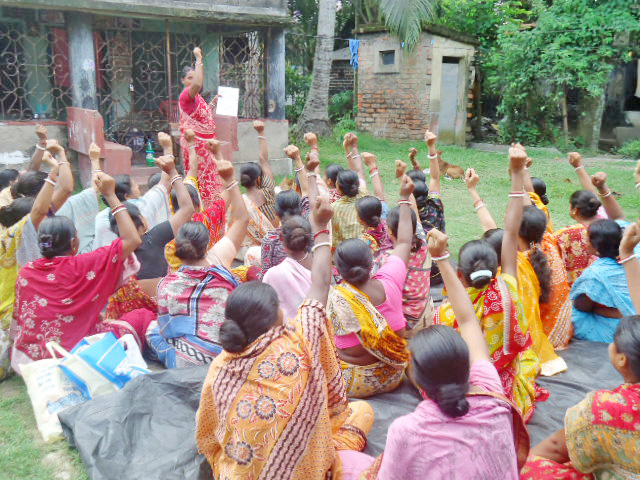 The Mamata Banerjee government seems to have adopted a policy of denying legitimacy to all those fighting crimes against women and underplaying the crimes themselves as media creations. This was implicit in the chief minister’s first reaction to the Park Street rape of 2012. She termed it as a “fabricated event”. The recent aggression shown against women protesting against the rise in crimes against women only confirmed this trend.

The collective act of militancy by the women of Kamduni is an exception. Most women who have faced attacks have been intimidated into silence. When Tapas Roy, Secretary of the West Bengal State Election Commission, released the results of the 5,259 seats won uncontested out of the 30,942 gram panchayat seats in the first phase of the three-phase 2013 elections in the state  a majority of which have incidentally been won by women  they revealed clearly how women candidates had been discouraged from contesting.

Not many women are as tough as Mamoni Begum of Moolgram village, who is contesting from the Mohanpur gram panchayat in Ghatal block of East Midnapore. Due to an on-going tussle between the State Election Commission and the government over security arrangements for the elections, the poll dates will be decided by the court, the chief minister and the Centre. The violence, meanwhile, has worsened because the need to intimidate has increased.

The local TMC outfit has issued a ‘fatwa’ against Mamoni’s family and they have been socially and economically ostracised. Even her mother-in-law, Kulsama Begum, who was working as a school mid-day meal cook, was denied work. Although she was reinstated later, Kulsama is still very afraid. “Mamoni’s children cannot play with their neighbours. The family cannot draw water from the tubewell. Her husband, Jehangir’s motorised van rickshaw has mysteriously disappeared. The fact that the CPI (M) had put her up as an “Independent” cannot offer her protection,” Kulsama says.

In Kolkata, a school teacher feels intimidated by local boys sitting around along the route she takes to her school. She has been heckled on the road. Her fault: her family is not a TMC supporter.

Verbal assault as a form of violence is as effective a tool of intimidation as physical. Says Seba (name changed), a village council member in Baruipur block of South 24 Parganas, “The panchayat elections have transformed every woman contestant into a woman of dubious morals.” However, in some villages in Baruipur, Mograhat and Bishnupur blocks of South 24 Parganas, where empowerment messages have struck root, women have adopted a resolution that they will not vote for any party if such character assassination continues. The resolution has been communicated to the local political leadership of all the parties. But the question remains whether women can resist the pressure inevitably exerted on them to vote in a particular way. They are also scared of a backlash after the Kamduni episode.

The case of Anjum (name changed), who heads a Self-Help Group (SHG) in North 24 Parganas, is a good example. She has been forced to sit it out over the past year and her small enterprise of producing vermi-compost along with other group members has shut down. Politics has affected the functioning of the SHG, leading to problems of payment, and the drying up of established income generation avenues. In fact, SHGs that had received support from panchayats headed by the current Opposition have been targeted and the women branded as "supporters". Anjum’s group members have turned away from her because they fear reprisal if they continue with her as the group leader.

There have been other such cases, too. In Kolkata, a school teacher feels intimidated by local boys sitting around along the route she takes to her school. She has been heckled on the road. Her fault: her family is not a TMC supporter. On 13 June, members of Maitree, an umbrella organisation of women’s groups, were manhandled by the police for staging a peaceful protest outside the chief minister’s residence.

Each of these instances signal the order to “shut up or ship out”, delivered by the chief minister at Kamduni on 17 June.

Refusing to speak on record, an articulate grassroots community leader painted a grim future: “As long as the panchayat election process is on, the backlash is being held in check - officially till 15 July. Once it is over, there will certainly be a time for reckoning.” They are also scared about the fate of their associates and friends. One woman reveals, ”Last evening one of our friends  let’s call her Fatima  did not return home on time. We were out of our minds with anxiety. We then sent an autorickshaw to wait for her at the station. We could not risk her walking back alone.”

According to the 2011-12 data released recently by the National Crime Records Bureau (NCRB), Bengal has recorded the highest number of crimes against women in the country for two years in a row now. Instead of addressing the issue, West Bengal’s Director General of Police, Naparajit Mukherjee preferred to deny the veracity of the figures, complaining that the media has chosen to ignore his “disclaimers” sent to the NCRB. As per the NCRB, crimes against women in the state touched 30,942 in 2011-12, up from 29,133 in 2010-11. While the number of rape cases showed a decline  1,987 compared with 2,317 in the previous year  convictions for rape remained abysmal. Of the 7,010 rape cases registered in West Bengal between 2009 and 2011, only 381 people were convicted for the crime. These figures only confirm what the National Commission for Women had observed in 2012 when it remarked that such “crime is a nearly risk-free business for criminals”.

Violence is, of course, not new to West Bengal. But the difference between the past and the present is the response of the state government. For all his failures, former chief minister, Buddhadeb Bhattacharjee, did not tolerate political interference in the handling of crimes against women. Mamata Banerjee is diametrically different. Uninhibited and explosive, she can and does exert her power to coerce open and ugly confrontations. She has done this repeatedly against hapless targets  mostly vulnerable women.

Nowadays, grassroots women activists in Mamata Banerjee’s state are driven to speaking in whispers. They constantly watch their words lest they be misunderstood. Says one woman quietly: “We are a worried lot today. Tempers are uncertain and times are bad.” (© Women's Feature Service)

Shikha Mukerjee is a columnist  and development journalist. This article has been published in arrangement with the Women’s Feature Service.