Will it be different this time?

Should we believe the promises politicians make to us this time around? Whatever it is you want the government to do about terrorism, begin by asking who will do it, and how. The India Together editorial on the Mumbai terror attacks.
01 December 2008 -

The terrorist attacks on Mumbai, resulting in tragic loss of lives among innocents and bravehearts, have thrown up some very predictable emotions. There is an outpouring of determination among some sections of the public that terrorism shall be defeated at all costs. There is despair at continuing government indifference. There is opportunism among opposition parties to point fingers at an evidently failing government. There is worry that our security agencies are just not up to the job of defending this country pre-emptively. There are also 'solutions' being proposed by analytical Indians outside the government -- from common citizens to corporates to retired officials and more. And, there is also rising anger at Muslims.

If India remains true to its model so far, a few days from now these emotions will be diluted, and on the way to being forgotten along with many others. But, we hear, there is some reason to think that this time, 'things will be different'.

The argument goes thus: Too many people got to witness this terrorism live, in ways that were simply not possible in earlier attacks. They were, in some sense, witness to the heroism and martyrdom of those who served, and equally to the absenteeism and opportunism of those who hid. This high 'involvement' (if one can use such a word to describe bystanders, that too on television, computer and mobile screens) is what makes 26/11 different, say some of our opinion-makers. For the first time, India had a chance to look deep inside itself, and really see how unprepared we are to face down such challenges. And therefore we will react.

Our systems of governance, especially the way we find, staff and train positions within government are so broken that it would be wishful to believe that we can construct a rapid and robust response to terror in the way that some Western countries have done during the last decade.

The first line of counter-attack against a terror strike, as we saw in Mumbai in first few hours of 26 November, was a weak, stretched, and unprepared local police force.

Without systematic response mechanisms, intelligence can only be of limited value. Indeed, in the current case itself, 24 hours after the seige ended, the clearest evidence emerged that the Mumbai attacks could have been foiled by Indian security forces. ATS chief Hemant Karkare, who was killed in the seige had reportedly already warned city hotels that an attack was likely - in part because intelligence reports had recorded a reconnaissance operation of the hotels to be targeted. Even though some security arrangements at the Oberoi and Taj had been tightened recently, one report in The Hindu revealed security was lifted on complaints of 'inconveniences'. Mumbai Police have also been quoted as saying they were already stretched and did not have the specialised man-power to provide the security needed to hotels to defend against an attack.

Here's worse. RAW had reportedly intercepted a satellite phone call on 18 November indicating that planned movement along the sea route from Karachi to Mumbai. RAW had alerted the Indian Coast Guard and the Navy. And even as they mounted a search in the seas between Karachi and Mumbai, the terrorists, apparently noticing this, had hijacked an Indian fishing vessel, dumping their own boat. It isn't clear why the failure to find the vessel did not result in Indian authorities assuming that terrorists could still have landed in on the coast.

All of this indicates one thing. This siege and it's protracted 60-hour battle was not the result of a substantial failure of intelligence itself. It is the failure of governmental-response to knowledge of threats and continuing evidence of a casual attitude within state-governments in the handling of threats. One law enforcement official has been quoted in the DNA, without being named, that there are no methods to grade and prioritise action on threat advisories received from intelligence agencies. And since local officials receive such advisories regularly, they do not have a way to determine which ones to act on.

In India, most public systems tend to break down at the local level, even if 'national' systems are relatively well-run by otherwise competent officials. The first line of counter-attack against a terror strike, as we saw in Mumbai in first few hours of 26 November, was a weak, stretched, and unprepared local police force. By the time the NSG landed, 10 hours of precious time had be lost. Central governments have not bothered to work with state governments to setup elite tactical squads that can be rapidly mounted and deployed to prevent attacks, especially with evidence of something imminent.

In intelligence itself, there is more work to do. By the government's own account, we need to improve our intelligence gathering and this is not one of those things that can be done in weeks. We need to develop technological sophistication to gather, understand, grade and manage mountains of data - an exercise that has barely begun in most state governments. Don't forget that state governments, not the Centre, must carry much of the load for whatever is promised now.

Another answer to the question 'why will it be different this time?' has been making the rounds: any government that does not act even in the face of such grave provocation and danger to its citizens will surely lose votes.

This 'votes will be lost' theory is a cruel joke constructed by our chattering class, mostly upon itself. It is the promised vengeance of a lot of people who don't themselves vote, but claim to understand the motivations and biases that bring others to the voting booth every few years. Pause for a minute and think through all the things that need to be done now, and imagine the various points along the way where governments could falter or - as is more likely - lose interest.

Even without the much-needed comprehensive reform to the police force, here's a small sample of the things needed - pass tougher laws, post elite forces such as the NSG in major cities, locate state government decision-making in acting on terror warnings in a single office that is held accountable and has to explain each warning that is ignored, bring in skilled persons at market pay into the departments, remove cronyism in career management within government, and assess progress using independent bodies. 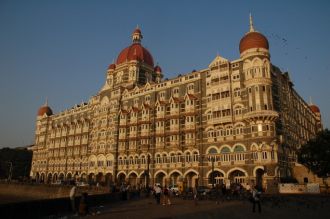 The actual development of pre-emption and response strategies, and the ability to train and deploy forces repeatedly and reliably is the real work. Much of that is yet to be done, despite the continuing terror strikes of the past few years. As we write this, analyses and comparisons are already emerging about how the J&K police had to create a counter-force to pushback on Fidayeen attacks, with some success. Still, anyone who has seen the inside of our state governments -- both people and processes -- would know the huge gulf we have to cross to thwart - not just put down once the firing has begun - acts of terrorism.

Still, let us say on some of these matters, politicians, sensing the mood in the country, make promises. You tell me - how much of this change will happen merely because the UPA-Congress government today promises to do something, or the BJP promises something different?

Fighting terrorism with a strong hand has become a necessary response to the reality of our lives. But actually doing so will take time, and great diligence.

Secure cities are not merely about keeping terrorists down, although that is hard enough. They're also about keep citizens moving up - socially, economically, culturally. Socio-economic divides and tensions in India are such that pools of exploitable minds are everywhere, with the evidence of their disenfranchisement all around them. It will require building bridges across communities, strengthening roles within government, and most importantly, subjecting public promises to real accountability.

However, the political system we have neither promotes nor rewards such work. Ask yourself this? When was the last time in any public meeting government officials (bureaucrats and politicians alike) were made to admit to failures that were avoidable, to explain why they failed and were not allowed to get away with a 'Chaltha hai?' or a 'We are looking into it' or a 'We have appointed an inquiry committee'?

Given that, what should we reasonably believe? That we are about to show the gravitas to invest in this? That the public will reward statesmanly promises with the coming months with faithfulness at the voting booth? No. Neither the current spurts of seriousness amidst citizens nor statesmanship amongst politicians will do.

Patriotism, nationalism and determination -- which are now at a visible high in the country after 26/11, and rightfully so -- will only take us so far. If you're looking for signs of real change in government, keep an eye on processes, not events and pronouncements. Look for accountability on responding to terror vested in one office or even one person, as opposed to being fragmented. Whatever it is you want the government to do to the terrorists, begin by asking who will do it, and how. And keep telling yourself that we can never have great success in isolated areas.