The silence of the truth

Still Voices, Tamal Sen's diploma film from the Satyajit Ray Institute looks at freedom of expression in the world's largest democracy, showing how it is suppressed in the name of the larger good, writes Shoma Chatterji.
26 October 2010 -

CBI internal investigator Jaidev Mishra is assigned the responsibility of investigating the sudden death of Nemo, a suspected Naxalite. As part of his investigation, Mishra comes to interview Arunima Sen, a reporter with a Kolkata daily and former girlfriend of Nemo. His investigation reveals that Nemo was shot down deliberately by two encounter specialists without being given a chance to defend himself. He did not have a criminal record. Nor was he carrying a gun.

But Mishra's boss asks him to change the report. He tries to convince him that Nemo was shot at because he had fired the first shot at the police. The boss adds that releasing Mishra's report would hamper the prospective compromise between the Establishment and the Naxalites who had agreed to negotiate with the former. Mishra is shocked because he has already discovered the truth. Not only was Nemo unarmed, but he was also left-handed whereas the reports showed one gun having been fired with the right hand. He changes the report but later ensures through a different route that the truth will finally find its way.

Still Voices is Tamal Sen's diploma film for direction from the Satyajit Ray Film and Television Institute, Kolkata. Through a very powerful sound track and imaginatively designed visuals, Sen points out how diabolically the citizen's fundamental right to freedom of expression is manipulated, censored and silenced by the Establishment in a country that prides itself on being the world's largest democracy. Subjects like the manufactured killing of a suspected terrorist by the police aren't usually the stuff of one's diploma film. Perhaps a choice like this reflects the pessimism of the younger generation of creative artists, asking "Where has love gone?"

The 25-minute film has been nominated for Best Narrative Short at the Flint Film Festival, Michigan, USA. It also received five nominations ((Best Student Short, Best Editing, Best Production Design, Best Actor and Best Actress) and won the Honorable Mention 4th prize at the Los Angeles Reel Film Festival. It has received a Special Mention Critic's Prize at the 58th Columbus Film Festival, the oldest film festival in the North American continent. It has been chosen to be screened in the competitive Student Film Section at the Goa IFFI this year. 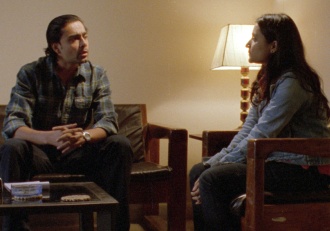 "The political backdrop of the story provides context and grounds it firmly in this time and place. Take out the details, and you have the beginnings of a story that could be set within any time in history." (Above: The investigator and the eye-witness).

Explaining what motivated him to deal with such a political statement in his diploma film, Sen says, "the political backdrop of the story provides context and grounds it firmly in this time and place. Take out the details, and you have the beginnings of a story that could be set within any time in history. The film's tagline 'The first casualty of war is truth', a quote from the Greek playwright Aeschylus, reflects the universality of the theme. At the time I was fleshing out the story, there was a tribal uprising in the village of Lalgarh, 96 miles from my hometown. The rapid industrialisation in other areas combined with long term neglect of tribals in Lalgarh had far reaching effects and fostered a sense of alienation. My film bears this out."

Why did he make a straightforward feature film when most students of cinema try to experiment and explore anti-narrative forms of expression? "As a student of cinema, I could discern the clear divide between mainstream and art house cinema in India. Mainstream films rarely pick topics which reflect real life situations while art house films seldom manage to attract mainstream audiences. I saw even fewer student films that managed to bridge the gap between the two. Shoestring budgets play a very significant role in this, pushing most subjects out of our reach. The budget also affects decisions made on the aesthetics, influencing the film from the ground up," explains Sen.

Still Voices is the story of three people, linked by a series of events, each driven by powers beyond their control, trying in their own way to wrest some control back into their lives against impossible odds. Nemo's traumatic past puts him on a path that rarely ends well, while all Arunima wants is closure after knowing the truth. As the only eye witness to the incident, she is absolutely certain about Nemo having been unarmed when the encounter specialists grabbed him. Jaidev wants to report the truth, but his upper echelons suppress him, emphasising the larger good at the cost of the truth.

The defining event of the narrative, using only sound on a black screen, begins the film - in a sense, a parallel to how the public remains mostly unaware of the truth.

The film opens on a black screen with sound metaphors of chasing footsteps and heavy breathing filling the soundtrack, suggesting the presence of the killers and their victim. This is followed by the screeching tyres of a braking car punctuated by the sound of birds suddenly taking flight. The screen comes alive with granular Black-and-White shots at this point, and soon fills up with confused images of people running here and there, then walking towards the centre of a Kolkata street to stare at something lying on the ground.

We hear the sound of three gunshots and the screen now changes to colour focussing on a pair of jean-clad legs lying prone on the street, a trickle of blood unfolding the tragedy of a death untold. As Jaidev Mishra sits down to interview Arunima Sen, the story flashes back and forth through swift cuts between Aruna's narration in the present and its picturisations in the past. Once the scene shifts to the interview, the film becomes more dialogue-centric than action centric till Arunima and Nemo go to the restaurant for lunch.

"The challenge was in creating a narrative that encouraged understanding and prompted debate about the consequences of our actions. We were conscious not about choosing sides, but about our wish to explore the lives of the people directly involved," informs Sen. The editing and the soundtrack are the two powerful 'voices' in the film alongside the full-blooded presence of the two actors who portray Mishra (Gaurav Dwivedi) and Sen (Paru Gambhir.)

Dishari Chakraborty's musical score uses the beat of rhythms more than melody and this adds to the air of suspense. Still Voices carries the professional finesse that comes from experience. Manas Bhattacharya's cinematography explores the graininess of Black-and-White and sets this against the soft pastel colours lit softly in Arunima's room juxtaposed against the dimly-lit shots within the restaurant. The editing by Sudipto Shankar Roy and the sound by Sudipto Mukhopadhay compliment the narrative and its unfolding. The film closes with the same Black-and-White grainy shots, elaborating the reality of what actually happened left hazy in the opening scenes.

Still Voices throws up a microcosm of the reality that exists in the country today where voices are stilled, rebels are shot down without a trial, entire families are killed through terrible errors of confusion by the very people who are paid to protect lives.

"I wanted to show that in the never ending battle for political power, truth is always the first casualty. The main purpose of this story was to portray the convoluted and dangerous world of politics, to highlight the lives of people who unwittingly become collateral damage in other people's aspirations, and finally to ask ourselves what difference a single man can make when the System itself is broken. Some of the audience members at previous screenings thought that the ending was too positive for the stark reality that the film was highlighting But this was a conscious decision. After all, we want our heroes to redeem us, to show us the paths that perhaps we are too afraid to take," Sen sums up.