Stem rust, the worst of the three rusts that afflict wheat plants, has made a comeback. Wheat crops in Africa have been at its mercy and the fungus has already broken into the middle-east. India is directly in its path, scientists predict. Sudhirendar Sharma has more.
13 April 2007 -

India's current and an all time high wheat harvest of over 74 million tonnes could soon be in jeopardy. Spores of a dreadful fungal disease are already on their way to infect at least nine million hectares of susceptible wheat crop in northern India. Should that happen, and there is every probability that it will, food security in a country already marred by unprecedented farmers' suicides will be seriously impacted in the years ahead.

The dreadful disease is way ahead on its predicted path, having already jumped its land of origin in eastern Africa into the Arabian Peninsula. If scientists' prediction and the wind movement stay on course, the disease will soon be on its way to the major wheat growing regions of India. This is stem rust, one of the three types of fungus infections, which was defeated in the 1960's by the resistant wheat varieties that had then ushered the historic green revolution. 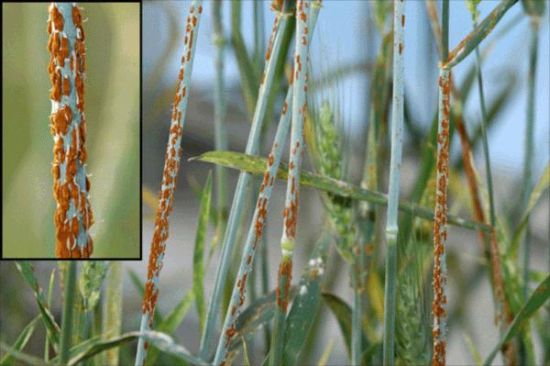 The wheat varieties may have lost some resistance since the green revolution era and the fungus has returned with a vengeance, more potent than it has ever been. Called Ug99, following its discovery in Uganda in 1999, the new race of fungus is dangerous enough to defeat the resistance of most existing wheat varieties. No wonder, for the eight years since it was first noticed there hasn't been any resistant variety of wheat in sight yet. The signs are ominous!

Wheat crops in Uganda, Kenya and Ethiopia have been at its mercy. The fungus has already reached Yemen and the precedence is that once it reaches that far, it is not too far from the sprawling wheat fields of south Asia. The previous emergence of yellow rust, a less deadly cousin of stem rust, in the 1980s had followed a similar route to destroy wheat crops worth US$ 1 billion along its way through Egypt, Syria, Turkey, Iran, Iraq, Afghanistan, Pakistan and India. Yellow rust resistant varieties like PBW 343 were developed then.

The fungus has already reached Yemen and the precedence is that once it reaches that far, it is not too far from the sprawling wheat fields of south Asia.

The fact that stem rust is the worst of the three rusts that afflict wheat plants compounds the crises. The fungus rusts the wheat stem much like a rusted iron rod, plugging its vascular system such that carbohydrates can't travel from the leaves to the grain. The result: some 40 per cent of grain yield is lost. The Food and Agriculture Organization of the United Nations (FAO) has estimated that some 65 million hectares of wheat crop could be at risk worldwide.

The tragedy however is that resources to fight the disease have been hard to come by. It took over five years since the first appearance of Ug99 for the International Wheat Improvement Center (CIMMYT) in Mexico and the International Centre for Agricultural Research in the Dry Areas (ICARDA) to pull US$ 2.07 million thus far through their joint efforts, the Global Rust Initiative (GRI), to systematically track the movement of rust and to screen resistant wheat germplasm.

The report isn't encouraging though! Of the 12,000 lines screened so far, 90 per cent have been found susceptible to Ug99. The fungus seems to have appeared fully armed, the previous resistant genes Sr31 and Sr24 have been found vulnerable. Scientists confirm that time is literally running out, the spores of the fungus have continued to march along favourable wind currents. Unconfirmed reports indicate that the fungus may have already reached Pakistan.

What if the stem rust were to travel across to India sooner than expected? Is the country's wheat breeding programme ready for another rust battle ahead? News reports cite India's Directorate of Wheat Research expressing confidence, but facts on the ground are less supportive. Most wheat varieties in India, containing Sr31 gene for rust resistance, are susceptible to Ug99. GRI has hinted at the need for developing resistant varieties for countries that aren't yet infected.

At this point in time when India is producing as high as 74 million tonnes of wheat, the threat of possible invasion by the stem rust could be devastating. And the news comes at a time when the country's most widely grown wheat variety, PBW 343, has shown susceptibility to a new race of yellow rust fungus. Cultivated in six million hectares of the wheat area in Punjab, Haryana and western Uttar Pradesh, yield losses of anywhere between 20--30 per cent have been predicted for the present.

However, time for preparedness to fight the new disease is limited. Though the Global Rust Initiative is on a fast track to develop resistant wheat varieties using marker-assisted selection, conservative estimates indicate that it takes no less than five to seven years to release a new variety. The Indian Council of Agriculture Research's (ICAR) contribution of US$ 200,000 to the GRI molecular breeding programme may seem small to help it get a resistant wheat variety.

Any attempt at importing wheat to overcome predicted shortages could be fraught with uncertainty, and importing must be done with caution. Unless rigorous quarantine mechanisms are in place, any grain of imported wheat should be viewed with suspicion. Having imported offshore wheat in sizeable quantities in the recent past, the vulnerability of India's indigenous stocks may have already been enhanced. These are testing times for both the scientists as well as the governments to make well-informed decisions.

As the alarm bells have started ringing all over, it is evident that the rust fungus, in both stem and yellow versions, is staging a comeback. The assumption that Puccinia graminis, as this fungus is scientifically called, has been beaten for good is no longer true. The reappearance of yellow rust in India and stem rust in Uganda clearly indicates that the fight against the notorious disease of wheat is far from over.

Sudhirendar Sharma is a development expert at the Delhi-based The Ecological Foundation.