Singrauli singed by coal and power

In the energy heartland of India, countless projects have wreaked havoc on the environment and displaced people extensively, sometimes more than once. With more projects planned, the future is just as bleak. Kanchi Kohli reports.
06 July 2011 -

The Singrauli region, India's energy capital, spreads across Uttar Pradesh (Sonebhadra district) and Madhya Pradesh (Sidhi and Singrauli districts). The connection between coal and thermal power is stronger here than anywhere else in India. With its vast supply of coal, it was a natural home to many thermal power plants.

Initially, it was the Government that eyed the potential of this region to drive the nation's economy, In the 1970s and 1980s, the National Thermal Power Corporation (NTPC) and state government-initiated thermal power generation was linked to the coal supplied by the Northern Coalfields Limited (NCL, a subsidiary of Coal India Ltd.). The region houses a few of the oldest thermal power stations and operational coal mines, which were set up by these companies. In addition there is an aluminium smelting plant, and other industrial and commercial operations.

The arrival of private companies later expanded the industrial activity. Today, there are several thermal power plants and coal mines under construction in the region, and areas have been demarcated for more. Name any of the big energy players in the country, and you'll find them in the Singrauli region: Reliance, Hindalco, Essar, Jaypee, Dainik Bhaskar Power, as well as many Special Purpose Vehicles set up as part of public-private partnerships. 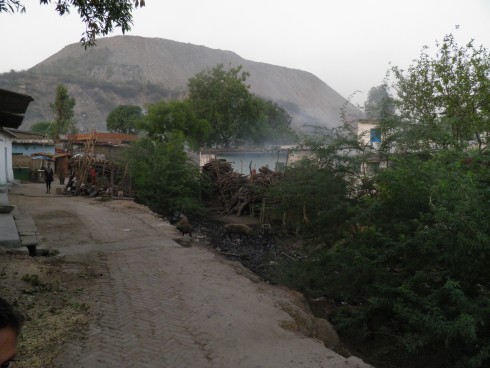 Many of them are continuing the government's legacy of developing captive coal mines that exclusively feed the thermal power plants of the same company.

Take for instance the Reliance Power Ltd which is executing the 3960 MW (6 x 660) Sasan Ultra Mega Power Project (UMPP) through its 100 per cent wholly owned subsidiary Sasan Power Ltd (SPL) at Sasan village. Quite interestingly two coal blocks - Moher and Moher-Amlohri Extension - that were under the command area of NCL have been allocated to Sasan Power Ltd by the Ministry of Coal. The coal produced from the above mines would be exclusively used for power generation by Sasan Power Limited as well as another power plant belonging to Reliance Power Limited. The target capacity of the ine is 20 MTPA, with the life of the mine estimated to be 29 years.

Similarly, the 1320 MW (2 x 660) Nigrie thermal project of the Jaypee group is expected to utilise coal from two coal blocks, the Amelia (North) coal block and the Dongri Tal II coal blocks. This mining is to be carried out through a joint venture company that the Jaypee Group has formed with Madhya Pradesh State Mining Corporation Limited (MPSMCL). To transport this coal from Amelia to Nigrie, a railway line will have to be constructed, discussions of which don't really figure when the approval of the coal blocks is under question.

This rapid land take-over for both mining and setting up ultra or super thermal power plants will only worsen Singrauli's history of unresolved issues of pollution, forest loss, displacement and health problems. As I moved around in the area, I found the heat unbearable ... and ironically it was not the weather which seemed to be the problem.

The locals have been extensively displaced by all this activity, dating back to the 1960s, when the nation was busy constructing its "temples of modern India." One such was the Rihand Dam in Sonebhadra district of Uttar Pradesh. This was the first time that the people of the region were asked to give up their homes, their agricultural lands and access to forests, as India was on the path of nation-building.

Many village panchayats like Kuldumri (Anpara), Chilika Dand (Shaktinagar) received their second displacement notices when Singrauli began to be tapped for coal mining and for thermal power plants. NTPC set its first Super Thermal Power Plant in Shaktinagar area in 1977. Since then people displaced twice and even thrice have been living in 40-by-60 feet or 30-by-50 feet plots that they received in the form of compensation. They can't sell the land, and have no access to to employment, with forests and agricultural lands diminishing in the areas.

Gross neglect by both project authorities and the government machinery is evident everywhere. Ramadhar Mishra of Chilika Daad village, while pointing out the Corporate Social Responsibility (CSR) chart put up by NTPC in his village, had this to say, "there is a full list of CSR activities pasted on the Panchayat Bhawan building, and most of it is not complied with. Even if they comply with 50 per cent of these, things will be better." He then pointed to specifics, "NTPC constructed a village toilet which is abandoned and never used by the villagers as there is no water in there. The cremation ground mentioned in the list is 13 km away in Bhairwa. In fact almost all the CSR is for NTPC itself and often in its premises. The computer facilities are not being availed by the villagers."

Mishra's village is surrounded by NCL's mine overburden, a coal railway track and NTPC's power plant. It is not surprising that in his poignant dismay he says, "NCL is supposed to have a green belt, but they have not done anything about it, even after destroying the forests. They should think of planting trees that will be useful - like Pipal, Neem, Karaunji etc. - not the thorny shrubs." And then he remarked, "kaanton se na pradushan rukta hai na hawa milti hai." (thorns neither help fight pollution, nor help with a cool breeze).

Many of the private investments today are continuing the government's legacy of developing captive coal mines that exclusively feed the thermal power plants of the same company.

•  Here a plant, there a plant
•  Anguish in Angul

An hour's drive from Mishra's village is Anpara (Sonebhadra district) where there already two functional thermal power stations and another two under construction. As pointed out by Ranjit Gupta from Yuva Visthapit Seva Samiti of Dibulganj village, "the state government's Anpara thermal plant was set up in 1985 as the 1630 MW project for which land was acquired in 1978. Next to this is the Lanco TPP (1200 MW) which has been constructed on land which had been earlier for the expansion of the Anpara project but was handed over to Lanco in 2007."

Ramesh Chandra Verma from the same village as Ranjit repeated himself many times over, "Earlier we could sleep on the terraces of our houses but it is just not possible. You put a white sheet on the bed at night, in the morning it has black dust on it. This phenomenon has increased especially after 2007 when the Lanco plant was established."

Singrauli's future is etched with the ambitions of several private and public sector mining and thermal power operations, some of which are already under construction or negotiation. Many have got their coal block allotments and their environment/forest clearances are underway. Large tracts of agricultural lands, common lands and forest are being taken over for an industrial expansion on a massive scale, the instances of direct and indirect displacement are only on the rise in the area.

With older issues still screaming for attention, the coming days in Singrauli are going to throw many uncomfortable realities in the face of India's energy push.