Suman Ghosh's documentary about the Nobel Laureate has not found its way to many screens yet. Nonetheless, it is a noteworthy effort to bring the economist a little closer to the people. Shoma Chatterji reviews the film.
22 January 2012 -

Amartya Sen: A Life Reexamined is a 56-minute documentary directed by filmmaker Suman Ghosh who also teaches Economics at Florida Atlantic University in the US. This is the first and till date, the only documentary that focusses entirely on the Nobel Laureate. The film is filled with the complex details of Sen's Welfare Economics and Social Welfare Theory that fetched him the Nobel Prize in Economic Sciences in 1998 discussed mainly in a question-and-answer session with his former student Prof. Kaushik Basu, Professor of Economics at Cornell University and currently Chief Economic Advisor to the Ministry of Finance, Government of India.

The documentary was complete in 2002. Unfortunately, Ghosh could not screen the film except at invited and private screenings because there were no takers to screen the film for the public. It had some screenings in Delhi, Chennai and at Presidency College but nothing beyond that. At last, ten years after it was made, a screening was organized in Kolkata, where Sen taught for several years by the Confederation of Indian Industry (CII) at the Gyan Manch to an invited audience.

"It was Amartya Sen, the humanist, who motivated me towards the making of this film. The fact that I am an economist and an aspiring film maker at the time gave me the confidence to take up such an ambitious and tough project. It took me two years to do the research while one entire year went into the shooting because the film features Nobel Laureates, scholars, academicians who I could meet only after a long wait that stretched for months. But in the end, the project was worth waiting for. Besides, I needed to plan the structure of the film carefully," says filmmaker Ghosh.

Ghosh, incidentally, won the National Award for his first feature film Padakkhep (Footstep) some years ago. Shirsha Ray was the India photographer, while Slawomir Grundberg and Jason Longo were the UK and US camera persons. Longo also did the editing. 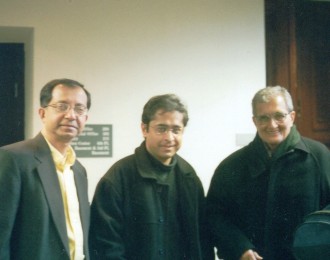 The film is a happy blend of the evolution of Amartya Sen's theories as an Economist and Philosopher with small nuggets of his life, especially growing up. (Pic: Amartya Sen with Kaushik Basu and Suman Ghosh).

The film shows eminent Nobel Laureates Paul Samuelson and Kenneth J. Arrow, as well as the economist Timothy Scanlon talking about Sen into the camera. Among many others whose views are recorded are Dhiresh Bhattacharya, Sen's professor at Presidency College, Sugata Bose, Gardiner Professor of Oceanic History and Affairs at Harvard who teaches a course with the Nobel Laureate, and Sen's late mother (then 92) who said she did not believe her son when he called up from abroad to inform her that he had won the Nobel Prize!

Prime Minister Manmohan Singh says of Sen, "He is a puzzle to me." Dhiresh Bhattacharya concedes that "Presidency College played a minimal part in his winning the Nobel Prize. Cambridge gave him a different language, a different way of thinking and a different approach to the subject."

"There is a lot of romanticism associated with Sen's work in Economics and Philosophy, which I thought needed to be elucidated," explains Ghosh. "For example, as Sen himself mentions in the film, his work on Social Choice theory and Welfare Economics is very technical. But Sen tries to water it down as much as possible. I agree that even then it might be inaccessible to a lot of people. I have carefully tried to balance the film with other topics such as his mother's reaction when she hears about the announcement of the prize from Sen himself, or his battle with cancer at an early stage of his life - which should be more understandable to one and all."

The film is a happy blend of the evolution of Amartya Sen's theories as an Economist and Philosopher with small nuggets of his growing up, first in Manikgunge (now in Bangladesh) then in Dhaka and finally in Santiniketan where he spent his boyhood till he joined college in Kolkata. In Santiniketan, he lived with his mother and maternal grandfather, Acharya Kshitimohan Sen, a close associate of Rabindranath Tagore and an authority on the philosophy of Hinduism.

The most striking revelation the film makes is Sen's nostalgic but very objective detailing of his battle with cancer at the tender age of 18, when he was in college. Few of us knew of this fight he survived mainly through his own reading up on carcinoma in books because when he was 18, radiation as a therapeutic strategy for cancer was little known and practiced and the doctors did not take his problem seriously at all.

"I detected a swelling in my mouth, a nodule in my palette, which the first doctor I went to could not detect. The experts at Medical College Hospital advised that it be cut off immediately, which I did not listen to. A medical student who was my hostel room-mate said it might be carcinoma. I began to read up and diagnosed my condition precisely as proved soon after in a biopsy conducted at the Chittaranjan Cancer Hospital.

"This self-diagnosis was very important for me. It opened up the possibilities inherent in the process of reading. I had diagnosed my illness only on the basis of my reading. I was seeing myself more as an agent than as a patient. For one year, I had to undergo radiation. It was unknown then because the Hiroshima bombing was just eight years old and few were aware of the effects of radiation then. It was a time for reviewing one's vanity. It was a challenge I had to face. I had a kind of aggressiveness about it which was important for me," says Sen.

He adds that he was given five years to live and with 49 more years gone (when the film was made in 2002), he is still alive. He adds that he went through depression for a long time during the illness because it cost a year's loss in academics. His mother (since deceased) said that as she was a believer while her son was not, she left everything to God.

The camera pans across the vast geographical canvas of Sen's world, opening with his teaching a class at Harvard, moving on to capture the statue of Mahatma Gandhi, through the open fields of Santiniketan touching two little boys running across the fields, to the Ashrama at Santiniketan and across the murals on the walls to a brief glimpse into Pratichi. There are scenes of College Street along Presidency College, shots of Sen walking down the green fields of Trinity College near Cam Lake, Cambridge as the camera meanders across figures of Alfred Lord Tennyson, Francis Bacon and so on capturing the essence of his nostalgic account of the beginning of his stint as Master at Trinity College which he served from 1998 to 2004. The film has touches of his sense of dry, British humour.

Though Santiniketan forms a formidable presence in the film, Tagore's music is present only through the lines of one song. One hears more of Western Classical compositions from Beethoven, Mozart and Haydn "because they capture the essence of Amartya Sen which we all agree, is a confluence of the West and the East," sums up Ghosh. "Interacting with Amartya Sen at such close quarters," he adds, "helped me to be a better person. His penchant for knowledge and curiosity towards a lot of things in the world is infectious and I have tried to imbibe whatever little I could from him."