The central government wants to ban the sale of non-iodised salt on grounds of rising iodine deficiency. However, states with notable rise in deficiency are those where a ban has already been in force for the past two decades  the north-eastern states and Uttar Pradesh. P Venu, an Assistant Salt Commissioner in Gujarat, connects the dots.
12 July 2006 -

The central government issued notifications in May 2005 and November 2005 proposing to ban the sale of non-iodised salt for edible purpose from 17 May 2006. (The ban has not yet come into force because the Mumbai High Court has reportedly placed a stay on it.) The notifications provide for the amendment of the Food Adulteration Rules 1955 to the effect that no person shall sell or offer or expose for sale or have in his premises for the purpose of sale, common salt for direct human consumption unless it is iodised.

The present Salt Commissioner S Sundaresan conceded two years back that as per a survey commissioned by UNICEF and the Uttar Pradesh state government, 70 per cent of iodised salt was found to contain less than 5 PPM (parts per million) against the prescribed level of 15 PPM.

This move, we are informed, is in the larger interest of the public health to ensure the supply of iodine, a micronutrient. The central government's view is that the lifting of the ban in 2000 has caused the populations in several states to become iodine deficient and hence the ban needs to be reimposed.

However, the most significant decline in the consumption of iodised salt has happened in places where a ban has been in force for the past two decades  the north-eastern states and Uttar Pradesh! The present Salt Commissioner S Sundaresan conceded in January 2004 that as per a survey commissioned by UNICEF and the Uttar Pradesh state government, 70 per cent of iodised salt was found to contain less than 5 PPM (parts per million) against the prescribed level of 15 PPM. The lifting of the ban by the central government in September 2000 could not have any impact at all in these places and hence cannot account for the abysmal state of affairs.

The fact of the matter is also that sale of non-iodised salt for edible purposes is already banned almost all over the country, a ban imposed by the respective state governments. The only exceptions are Kerala, Gujarat and some districts of Maharashtra. The situation was no different when the central government had taken similar action in 1998. Even at that time the sale of non-iodised salt had been banned in all the states and union territories except in Kerala and certain districts of Maharashtra and Andhra Pradesh. The lifting of this ban in 2000 only affected these states; it did not, in any way, affect the validity of the ban imposed by the respective state governments. Gujarat and Orissa did lift their bans, but Orissa subsequently reimposed the ban.

Clearly, the lifting of the ban could not have been as catastrophic as is made out to be and could not have effect at all in the states where the ban imposed by the state government continued to be in force. The impact, if any, should have been only in Kerala, Gujarat, parts of Maharashtra and possibly, Orissa.

The causes for the supply of inferior quality iodised salt lie elsewhere.

Underneath the ban move

In India, salt is produced mainly in three states  Gujarat, Rajasthan and Tamilnadu. Movement by rail is the lifeline of the industry for marketing edible salt to distant markets. Salt for edible purpose is under priority traffic and is streamlined under the Zonal Scheme formulated by the Salt Commissioner's Office and the Railways. The indents (forwarding notes) are accepted by the Railways only if countersigned by the Salt Officers.

By 1988, most of the north and north-eastern states were declared to be goitre-endemic and iodised salt alone could be dispatched to these states by rail. Hence it was just a matter of survival for the salt manufacturers to go for salt iodisation. They were further encouraged by the subsidy offered by the government.

But what this also brought was a trail of leakages which are still haunting the salt iodisation programme. Iodised salt of good quality has not been reaching citizens. Ironically enough, this shortcoming is manifested in the very data that is relied upon to justify the proposed national ban of non-iodised salt. What has been going on? 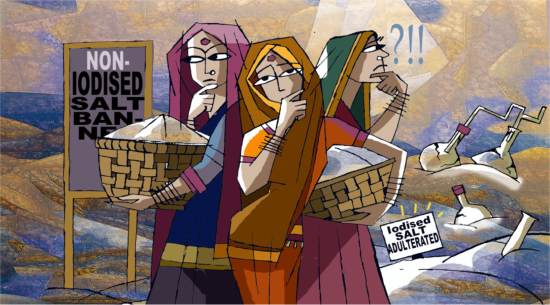 Iodised salt is similar in all respects to common salt  in look, smell and appearance. This is true in respect of every variety of salt whether crystalline, crushed, powder, refined or vacuum salt. Iodised salt can be distinguished from common salt only through chemical testing. Effective implementation of the programme would be possible only by ensuring that quality iodised salt alone is dispatched from the manufacturing centres in the major salt producing states. This task has been entrusted with the Salt Department under the Union Ministry of Industry, which has been assigned as the nodal agency for quality control of iodised salt at the manufacturing end.

As a part of the Universal Salt Iodisation Programme, the Salt Department has been specially equipped for performing these tasks. Additional posts have been created and salt test laboratories have been opened at all the salt producing centres. Funds have been made available by the Ministry of Health and Family Welfare and UNICEF.

But mere pot and ladle does not constitute food. Many more ingredients, some of them subtle, are required. This is true in respect of implementation of any programme, especially by public agencies. In respect of salt iodisation, the situation has been too challenging because of the inherent inadequacies in the prescription of quality standards and the inspection of iodised salt.

Salt iodisation is not a chemical process and iodised salt is not a chemical compound. Iodisation is only the physical process of mixing the iodine compound with common salt. The iodine compound required for iodising one tonne of salt is just 50 grams. Iodised salt, so obtained, is a mixture  a heterogeneous mixture. The extent of homogeneity in a mixture is dependent upon the relative proportion of the respective components and the uniformity of particle size of each of the components.

But common salt is never of uniform particle size. This is true even in respect of powder salt. The net result is that at the macro level it is impossible to achieve uniform iodisation of salt. The iodine content of iodised salt would never be a definite one. It would only be within a range and hence the test results are non-repeatable.

However, the prescribed standards and the testing methods disregard these vital aspects. The quality specifications are laid down as if iodised salt is a chemical compound. The only allowance is that different specifications have been laid down for manufacturing and consumer ends, 30 PPM and 15 PPM, but without providing any coherent definition for these terms.

The situation has been further complicated by the inadequacy of the technology for achieving homogeneous iodisation and the highly trying logistics involved in the dispatch of salt by rail where more than two thousand tonnes of consignment must be readied and loaded into the wagons at very short notice or, no notice at all. (Improvements in technology have been mostly for the production of refined iodised salt which, in consumer pack, sells at more than Rs.6 a kg.)

In these circumstances, the quality inspection of iodised salt cannot but be an act of fixing a square peg in a round hole. Perhaps such hiccups are inevitable in the implementation of any programme. Even theoretically sound proposition gets unstuck on the hard rock of practical implementation. Still, these problems were not insurmountable. Sound management and good governance could have taken care of them. And this is where the Salt Department has fallen short.

As an organisation formed of the coalescence of disparate salt departments in the different Presidencies under British rule, the Salt Department was bogged down in an identity crisis from its very inception, primarily because it could not inherit the basic function of the parent organisations  that of levy of salt revenue. Tax on salt was abolished with effect from 1 April 1947. And by the time the policy of universal iodisation of salt came in the offing, the Department had ceased to be a public institution. More than aiming for the welfare of the public, it became an end in itself, its functions being implemented with fractured integrity. Its focus was on conformance, that of maintaining clean records, rather than on performance.

It is in backdrop that the quality inspection of iodised salt was taken up. This task was streamlined into that of maintaining clean reports of chemical testing. As such a consummate mission could not be attained through rigorous methods of drawing representative samples and their meticulous chemical analysis, the process was simplified to that of testing of doctored samples or just cooking up the test reports without conducting any testing at all! In mundane terms these activities were just a counterfeit, but within the annals of the Department this has been a smooth administrative system. And this is a zealously guarded protocol. Dissenters have met with ignominy.

There's more. Iodine is unstable and volatile and hence cannot be used for salt iodisation. Potassium Iodide, its most commonly available compound is unsuitable for hot climate in our country. The commonly used chemical for iodisation is Potassium Iodate (KIO3), which is very stable. This chemical has strong oxidising properties, which is made use of in its qualitative and quantitative analysis.

The exercise of quality inspection of iodised salt is devoid of the basic elements of quality. It is no surprise that iodine-deficiency persists in regions where the ban has already been in place.

This is compounded by the fact the currently, the testing of iodised salt is indirect; it is based on the iodometric method, where the presence of an oxidising agent in the salt is estimated by using Potassium Iodide in an acid medium and the liberated iodine is estimated against Sodium Thiosulphate. For the lay reader, there are two points to note. One, all oxidising agents release iodine from Potassium Iodide in an acid medium. Hence presence of any other oxidising agent in salt can also give the same result. Second, the iodine detected while testing iodised salt is released from the Potassium Iodide present among the reagents (used for testing) and not from the iodine compound added to the salt.

In sum, the present method of testing is not at all confirmatory for the presence of iodine in iodised salt. With the exercise of quality inspection devoid of the basic elements of quality, it is no surprise that surveys at the consuming centres do not present a rosy picture and iodine deficiency persists in regions where the ban has already been in place.

P Venu is Assistant Salt Commissioner in Jamnagar, Gujarat. He holds an M Sc in Applied Chemistry. The views expressed are his own and not that of the government.