Rapist to victim: will you marry me?

Dilution or outright waiver of punishment if a rapist offers to marry his victim is an extra-legal step, one that is not written into law anywhere. But it continues to be entertained because the internalisation of stigmatisation is wide-spread, and even the victims believe it. Shoma Chatterji reports.
25 April 2007 -

In 1991, Bollywood churned out two films that wove their stories around rape victims. The first was Benaam Badshah (1991); starring Juhi Chawla and Anil Kapoor, the film unfolded the story of a pretty young girl in a Mumbai chawl, who is raped by the male lead actor (somehow, the word 'hero' is difficult to use with 'raped'). The victim takes on a determined, if bizarre crusade to get this rapist to marry her. The other film Tejaswini, a Hindi remake of a southern hit, dealt with the struggles of a lady police officer who has to constantly fight against the anti-socials of her area funded by a minister. At the centre of the narrative is her crusade to see that the politician's son is forced to marry a girl he raped. Thankfully, Benaam Badshah sank at the box office without a trace. Not so Tejaswini, which was a thumping box office hit in the southern states.

Fifteen years later, the story of the rapist going scot-free by marrying his victim transcended the celluloid world to step into the ugly reality of life. In 2005, in Charthawal village, Muzaffarnagar district, Uttar Pradesh, Imrana, wife of Noor Elahi, was being forced to separate from her husband and marry Ali Mohammad, her father-in-law, who had raped her. The decision was supported by the local panchayat, which declared her existing marriage null and void. She was commanded to observe a period of seven months to 'purify' herself and then marry Ali Mohammed.

Imrana proved a woman of some courage. With her husband's support, the intervention of the National Commission of Women and other leading women's organisations, and an uprising within the media, she thwarted those who wished to railroad her into further victimhood beyond the rape itself. Recording her statement before the chief judicial magistrate in Muzaffarnagar in Uttar Pradesh on 20 June 2005, Imrana told reporters that she was ready to defy the community panchayat. "I will continue to live with my husband despite the fact that the panchayat has declared that my marriage has been nullified after the rape. My husband supports me and I am ready to defy the panchayat," she said. In August that year, the Indian Supreme Court ordered the Darul-ul-Uloom of Deoband and the All India Muslim Personal Law Board (AIMPLB) the two pillars of Islamic bodies in India, to reply to a petition filed against them. The petition charged these organisations with interfering with the country's legal system and introducing parallel Islamic laws in violation of the Constitution. 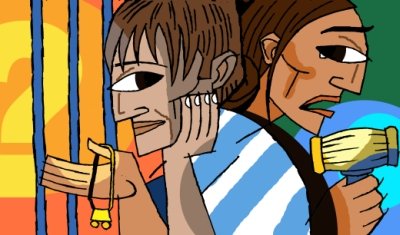 Questioning the unilateral, feudal and fascistic approach of the 'community panchayat' in the Imrana case, in a press statement (June 20, 2005), several leading women's organisations said: "How can a system exist parallel to political and executive bodies constituted by the state, manned (they appear to be run exclusively by men) by persons who are ignorant and insensitive and whose judgements are irrational and inhuman? How can their authority supersede that of the state?"

The State however, is party to the same unilateral game. In 2002, the Delhi High Court quashed the rape case against one Manoj Kumar after the victim submitted an affidavit saying that she was willing to marry him. Even when the victim refuses to marry the rapist, as in the case involving the rape of a 23-year-old Delhi nurse of Shanti Mukand Hospital, rapists can resort to this tactic. In this instance, the victim was raped, her right eye was gouged out, and her left eye was badly wounded by a ward boy on September 07, 2003. As she waited in court for the judge to pronounce punishment, in an application to the court, the rapist Bhura proposed marriage to her. His argument was that since no one would be prepared to marry her due to the social stigma, he would like to do so. She turned down the proposal as bogus, horrible and audacious. "He made it sound like a favour. This was more shocking than the proposal itself. The most horrible thing in the whole business was the court having admitted such an application," said the victim. In the end, justice prevailed, and Bhura was awarded life imprisonment.

In other cases, however, rape victims themselves appear to tolerate offers of marriage by rapists. Why? Dr. Manjeet Bhatia, of Womens' Studies and Development Centre, Delhi University, thinks this is just an extension of social attitudes towards the crime itself. "The internalisation of being stigmatised for life is so deeply ingrained in the victim that she actually believes that marrying her rapist is the only way out," Bhatia says. And so the practice continues. Dr. Rajat Mitra, psychologist and director, Swarnchetan, an NGO that counsels victims of such crimes, says it cautions rape victims against marrying their attackers, telling them that such marriages are disastrous and are marked by further violence. But not every victim is willing to heed this advice. "When we tell people, for example, her family members, that she cannot live with somebody who has caused her such trauma, they brush it aside saying that the girl would get over it," says Mitra.

The story of the rapist permitted to go scot-free if he marries the victim is rooted in ancient history, and is more a gender issue than a religious one. Susan N Herman, Professor of Law, Brooklyn Law School, writes: "In some ancient societies, women were treated as a form of property and rape was defined as an offence against the property owner - the woman's father or husband - not against the woman herself." (Crime Control and Civil Liberties in Criminology, A Contemporary Handbook.)

Clearly, dilution or outright waiver of punishment if the assaulter offers marriage is an extra-legal step, one that is not written into law anywhere. Nonetheless the legal community appears to be willing to overlook this. Arati Mundkur, of Alternative Law Forum, says, "With regard to rapists marrying their victims, there is no rule or law on this point. This is a personal perception, unfortunately adopted by the judiciary as evinced in the recent Shanti Mukand rape case. The quantum of punishment should in no case be influenced by an offer from the rapist to marry the complainant. In a number of workshops we have conducted across districts in Karnataka, the idea among lawyers and among women is that if the rapist wants to marry the woman raped by him, no FIR/complaint should be filed. This offer to marry her is itself considered atonement."

Ranjita Biswas, journalist, says, "When a rapist offers to marry his victim there is purportedly, a sigh of relief. What a perfect solution! The woman is socially rehabilitated and the rapist is forgiven. After all, he has agreed to marry her, hasn't he? Sadly, even lawyers sometimes consider this not such a bad idea and choose to defer judgement waiting for a 'response' from the victim. But how can the courts entertain such a preposterous proposition in the first place? This is victimisation of the victim all over again. She has already been wronged. The wrongdoer, on the other hand, neatly escapes the consequences of his heinous act."

Shoma Chatterji is a freelance writer based in Kolkata, and a member of NWMI. She is the author of 16 books, including 'Kali - The Goddess of Kolkota' and 'Gender and Conflict'.

TIGER SANCTUARY : Are tigers back at the Buxa reserve?
MORE ARTICLES
on similar topics ...
GENDER LAW AND POLICY