Maharashtra is the first state in India to adopt a reform policy in the water supply and sanitation sector. In Nanded, the first signs of this paradigm shift - from centralised decision-making to allowing village bodies to manage their water - are now evident. Meena Menon reports.

A 30-foot high pink water tank stands in Pardi village in Nanded district's Loha taluka. It's a structure the villagers are very proud of, much like their large well a short distance away.

Until two years ago, Pardi suffered from acute water shortage in summers, and consequently from diseases like jaundice, malaria, cholera and gastroenteritis. Of the seven handpumps, only two worked, and the water turned yellow in summer. Women sometimes walked 1.5 km to fetch water, even at night. "We used to dig a hole at the bottom of the well and scoop out water. The well dried up by January," says Jamuna Pawar, president of the village water and sanitation committee (VWSC).

But since August 2002, people here have realised what it means to get clean water in the village. Pardi is the first village in Nanded district - one of the poorest in Maharashtra - to have a pilot water management and distribution scheme. "After a gram sabha (village meeting) was held, the VWSC was set up on August 15, 2001. We prepared an estimate of Rs. 2.5 million; we decided initially to collect Rs.200 in two instalments from each of the 260 families. About Rs. 115,000 was raised, and the government provided a grant of Rs. 1 million. Those who could not pay did shramdan (voluntary labour)," she says. As a pattern, each village raises 10 per cent of the estimated amount in cash and kind. 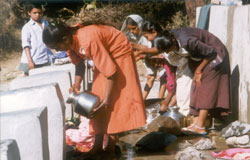 Villagers dug a new well and tested the water. Then a 700-metre pipeline was built to collect and store the water in the new 60,000 litre capacity tank; the old one was repaired as well. A three-km network of pipelines was connected to stand posts (community tap) at every lane. People are charged Rs. 15 per month for public connections and Rs. 30 for private connections.

Another new well is being dug, and four bandharas (small dams) have been built on a nearby stream to recharge the water coming in during the monsoons. Pandurang Pawar says, "Since we have spent our money, we feel we can tell people to be careful and look after the pipes. We don't have diseases like cholera or gastroenteritis now, and even the mosquito menace has lessened."

Rs. 750 was collected from each family for the maintenance of the water distribution system. There are 15 stand posts so far for public use and a few private connections. The committee has opened a bank account as mandated by the government for the water project. "Now we are careful about water and we also realise it is our right. Many women initially felt it's the government's job to provide water but now there is more acceptance that we must pay for it too," says Pawar. "We refused the option of giving the work to a contractor; we did it ourselves," she adds. The committee has hired someone to look after operations, maintenance and collection of water fees.

Pardi is also working towards 100 per cent sanitation and over 50 per cent of the houses have toilets. Villagers are more amenable to the concept of cleanliness and sanitation once there is access to water, says Ravi Akulwar of Swayam Shikshan Prayog (SSP), a Mumbai-based NGO which works as Community Participation Consultant to the Sector Reform Project (SRP) in Maharashtra since 2001.

Maharashtra is the first state in India to adopt a reform policy in the water supply and sanitation sector in 2000. Prema Gopalan, founder director of SSP, says there has to be a paradigm shift from centralised decision-making to allowing village bodies to take over. "There was complete scepticism at that time - the government could not believe people could contribute to projects or later manage them," she recalls. "What we have cracked now is the community process of planning and involvement and executing a water supply project." SSP has prepared the community operational manual for the state's rural drinking water project (called Jalswarajya).

A large water tank with a capacity of 50,000 litres nestles on a small hillock above Sanguchiwadi, taluka Kandhar, where the pilot water project was completed in 2002. A new pipeline has been laid, connecting the old well to 18 standposts in the village. Sushilabai Sapure, vice-president of the VWSC, says, "Earlier we had to fetch water from the 75 metre deep well which had steps going down. Once I fell into the water and had to be rescued because I could not swim."

Sahibai Keshavrao Kukkalwar, sarpanch of the village and head of the VWSC, says the women have taken to collecting the monthly fees, as the "waterman" did not prove effective. "People pay up when we women collect," she remarks. Three years ago, this village was on the map for its gastroenteritis cases. Now villagers claim no doctor needs to visit them. The village also has a water-testing laboratory.

In each village, a gram sabha is held first followed by a meeting of all women and then a village water and sanitation committee is chosen, half of which are women.

D R Bansod, chief executive officer of Nanded zilla parishad, says government officials verify proposals put forward by the village and the water is tested for potability. While the government gives no subsidies, it has appointed three NGOs to implement an information education and communication (IEC) component of the programme in the district.

As part of the central government's demand-driven water sector reforms, 63 districts were chosen on a pilot basis in India. Nanded is one of the four in Maharashtra. Dilip Joshi, sectional engineer, SRP Nanded, says Rs. 400 million was approved for each district in February 2000. While 90 per cent funding came from the Centre, 10 per cent was supplied by the state.

Of the 1,600 villages in Nanded, 550 villages prepared a proposal but only 238 schemes were sanctioned at a cost of Rs. 350 million. "In Nanded, to no one's surprise, 100 per cent of the water projects are built by the villagers. The final payment is made after the village mahila mandal (women's group) gives a no-objection certificate. The pilot project will end by March 2004. Only 30 are complete and some are in various stages of completion," says Joshi.

The experience in Nanded and three other districts - Dhule, Raigad and Amravati - has translated into a World Bank-funded Jalswarajya project in 26 of the 33 districts in the Maharashtra. Sudhir Thakre, director, water supply and sanitation, Maharashtra, says that in July 2000, the state government took a policy decision to encourage a community-led and demand-driven programme for water supply and sanitation. The state had earlier spent Rs. 160 billion in rural drinking water supply and it had not really worked well. "A district team consisting of officials, NGOs and IEC specialists was set up for planning, capacity building etc," says Thakre. "So far over 100 villages have responded in each district and we have to go cautiously. The project cost for nine districts is Rs. 13.5 billion of which the Bank is providing Rs. 9.1 billion."

While 80 per cent of the rural water supply comes from ground water in the state, watershed management also assumes great importance, as does operation and maintenance. Traditionally, people have always managed resources better than the government. It remains to be seen whether this will hold true in this project.

Meena Menon is a freelance journalist from Maharashtra. She writes on development issues.