On September 6, the waters of the Periyar, the largest river in Kerala, suddenly changed colour into red. The discolouration occurred at Paathaalam Bund near Eloor which houses the Udyogamandal Industrial Estate. Due to tidal waves, the discoloured water flowed upstream (Eloor is just 17 kms from the Arabian sea) triggering a scare in the region that it might get into the drinking water system through the local pumping station and possibly even the water supply system in the entire Kochi region. The Ernakulam district administration asked the Kerala Water Authority to be extremely vigilant. Health officials were asked to be on guard. The district collector A P M Mohammed Hanish asked the Pollution Control Board (Secretary, S D Jayaprasad) to report immediately on the reasons for discolouration.

Though no toxicological testing was done this time, for the residents of Eloor-Edayar region the discolouration of the river and massive fish kills are not a new phenomenon. In the last nine months discolouration occurred 25 times and fish kills occurred thrice. On 7 September, the day after the most recent discolouration, a fish kill occurred in Kadammakkudi, a neighbouring village. For many years they have been suffering from the indiscriminate discharge of toxic effluents by the industrial units. The Environmental Impact Assessment (EIA) Report submitted in March 2006 by the Local Area Environmental Committee (LAEC), which was set up on the direction of the Supreme Court Monitoring Committee on Hazardous Wastes (SCMC) in 2004, reveals the deplorable condition of the Periyar.

The report revealed that the soil, water bodies and the wetlands in and around Eloor have been contaminated with heavy metals like zinc, lead, cadmium, chromium and persistent organic pollutants like DDT. Gas emission let into Eloor's air include acid mists, ammonia and chlorine. Greenpeace, an international NGO had identified Eloor as one of the toxic hotspots in the world. A 1999 study done by Greenpeace had revealed that the incidents of diseases like cancer, asthma, congenital disorders and miscarriages have increased in this region.

•  Back: long arm of the law
•  River keeper of the Periyar

Subsequent to the latest incidence of discolouration of the river, the residents of Eloor-Edayar region held a People's Right Declaration Convention at Eloor on September 17 for asserting their right to live, food security, safe water and healthy environment. The People's Charter of Demands adopted at the convention called for immediate implementation of an integrated and comprehensive process for decontamination of the river and the surroundings. It also called for issuing medical cards to all those affected for free medical aid; stoppage of production of DDT and endosulfan by the public sector Hindustan Insecticides Limited (HIL) and payment of compensation by the Centre and World Health Organisation (WHO) as the government had set up the HIL on a request by the WHO. While the sale and use of endosulfan are banned, production is not. The Charter demanded the relocation of radioactive material (Thorium) stored in Eloor by the Indian Rare Earths. IRE has stacked the material in underground storages just about one and a half metres away from the river inside the company compound.

Significantly, the convention-attended by politicians, trade union leaders, legislators, scientists and environmental activists-- came down heavily on the Kerala State Pollution Control Board (KSPCB) for miserably failing to check the toxic contamination of the river. Most of the speakers pointed an accusing finger at the PCB. "The PCB has degenerated into an ineffective bureaucracy," said K Chandran Pillai, MP and CITU leader who inaugurated the convention. "It lacks will, commitment and right perspective to control pollution. The Board should be revamped immediately." 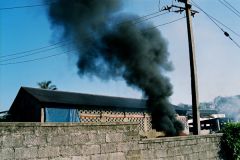 The inaction by the PCB on the report submitted by the LAEC that probed into the reasons of chemical pollution and suggested remedial steps was highlighted in the convention. "The LAEC submitted its final report after monitoring the functioning of all the factories in the industrial estate for eighteen months. It was a very comprehensive report. But the PCB has not taken any action on the basis of this report so far," says Adv. P K Ibrahim, chairman of the now-defunct LAEC. "The PCB had not done the basic investigations before giving consent to the units to continue to operate." The approvals were made on superficial parameters. Though the LAEC had recommended revision of parameters of approval, the PCB is yet to do so. "Instead, it tries to protect the interests of the erring factories," says Jacob Lazar of People's Union of Civil Liberties who was a member of the LAEC.

In fact, most factories were forced to set up effluent treatment facilities by the strict monitoring of the LAEC. But since the term of the Committee was over in March 2006, some of the factories have once again started clandestine discharging of chemical wastes into the river. "Why can't the PCB force the industrial units to comply with rules and regulations?" asks Purushan Eloor of the Periyar Malineekarana Virudha Samithi that spearheads the anti-pollution agitations. "Had it taken stern steps the situation would have been better. The PCB is the real culprit."

Going by the track records of the KSPCB, what the convention points out seems to be true. When the Supreme Court Monitoring Committee on Hazardous Wastes visited Eloor in August 2004, it had a real shock. After evaluating the situation, the committee had strongly pulled up the PCB for its indifference and inaction. (See: Back, the long arm of the law, September 2004).

"The ground realities in Kerala are terrible. Kerala is one of the states which have miserably failed to act on hazardous wastes. The PCB has willfully and callously disregarded the directions of the Supreme Court orders," observed the committee then.

Responding to the indictment by the SCMC, the KSPCB instead of taking necessary steps for forcing the industries to clean up accumulated wastes, reducing use of toxic substances and controlling toxic waste release from their factories in a time-bound manner, served closure orders on 32 industrial units. Later the Kerala High Court found the closure orders were unjustifiable on the grounds that no show cause notices were served prior to the closure orders. The then Kerala Chief Minister Oommen Chandy requested the SCMC to grant a month's time to comply with its orders. The committee extended the time for setting up temporary arrangements for storing the hazardous wastes by two months. 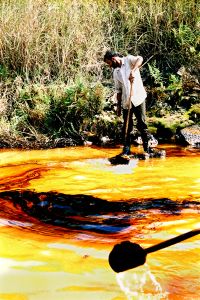 But nothing happened. After completing its second review in October 2004, the SCMC had observed that both the state government and the PCB had totally disregarded its directives. It was then that it had asked the PCB to set up a Local Area Environmental Committee for monitoring the pollution and take stern actions on the basis of the report. The EIA by the LAEC recommended a Comprehensive Chemical Disaster Management Plan involving the district administration, the factories, the KSPCB, the local bodies and the NGOs. It also recommended that the PCB should endeavour to achieve zero discharge by the industries within three years.

Environmentalists have strongly opposed the PCB's conclusions. They alleged that the PCB officials are protecting certain industries in Eloor and called for a judicial enquiry. (Quest Features & Footage)

M Suchitra is an independent journalist based in Kochi.