Power-play, for the people

"Free electricity for farmers is quite an easily achievable goal," remarks Chandrakant Pathak casually, "What is more, the costs too are nominal."

Coming from someone else, and at a time when the issue of free electricity is creating political ripples in Maharashtra, such a remark could only be called jaw-dropping. But for Pathak, electric power is everywhere. "Anything that moves can be used to generate power," says he, "The only thing needed is will, and creativity."

If accent was placed on local power production by the people, not only would the per unit cost of power come down dramatically, but the entire power problem would become non-existent in a few years.
-- Chandrakant Pathak

•  Brains and bullocks
•  Think outside the barrel

If you want proof, you have only to look at Pathak's work. He has invented power-generation gadgets that can be operated manually or by bullock power, and even installed into bullock-cart wheels. He has modified power-consuming gadgets of every-day use, like motor pumps, flour mills and even electric vegetable shredders to run on manual power.

Tailored especially to suit rural energy needs, Pathak's gadgets are gaining popularity in the rural areas of his native district of Pune, Maharashtra, and several neighbouring districts. His work has been recognised and subsidised by the Maharashtra Energy Development Agency, and he has received several awards for his work.

It all started in the year 1993. Then a mechanical engineer working with a private firm in Rajkot, Gujarat, Pathak volunteered for rehabilitation work with the Sakal Relief Fund. This work took him to some remote villages in the Ratnagiri district of Maharashtra.

In one of these 'on the other side of nowhere' places, the only source of water was a river running through a deep ravine. "There was no electricity or diesel to run a pump. We had to draw water by tying a child to the end of a rope and letting him down into the ravine." The memory still sends a shiver down his spine. It was this incident that set him thinking on the power crisis in rural India.

One of the first things that suggested itself to Pathak's imagination as a solution was the presence of bicycles and bullocks in nearly every rural household. "When I returned home," says he, "I attached a motor pump to an old bicycle and ran it. After a few modifications, it worked. It was a real 'eureka' moment for me." 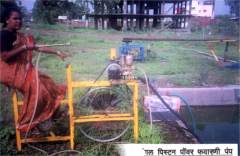 In 1995, Pathak started his own institute, the Modern Technical Centre, in Pune, with the aim of devising gadgets for power self-sufficiency in rural areas.

Today, his first bicycle pump has evolved into several varieties of bicycle-operated lift and spray pumps to suit different needs. Some of the pumps are powerful enough to draw water from a depth of fifty feet and pump it up to a height of 100 feet. Anything between 15-40 litres of water can be pumped per minute. Keeping in mind the requirements of crops like fruit trees that reach great heights, he also invented a bicycle-operated spray pump that can spray insecticide or water up to the height of 30 feet.

Shantaram Damse, a farmer in Wadgaon, Pune district has bought two bicyle powered pumps from Pathak, a spray pump and a water pump. He uses the water pump to get drinking water and to water his garden. The spray pump has a larger reach than the usual sprayer and involves less exertion. "As the tank is mounted on the bicycle, I don't have to carry it on my back," says Damse.

Namdeo Shinde of Wadgaon uses Pathak's bicycle-powered spray irrigation pump. "This pump serves a double purpose -- it can be used to pump water for storage purposes as well as for spray irrigation," he says, pointing to its convenience. "Before I had this pump I had to shell out exorbitant amounts in electricity bills. But the small one-time investment on this pump is now saving me all those bills," he adds. Baban Dimle of Mawan concurs. "I use it to irrigate delicate crops like Methi (Fenugreek) and coriander. It has very good reach, and saves a lot of electricity," he says.

After the bicycle, Pathak turned his attention to the other source of rural power, the bullock, and invented a bullock-cart-mounted and powered 'Jaladhara pump', a mechanical contraption which can be used to spray insecticide and to run four sprinklers simultaneously for spray irrigation. The pump is powered by the motion of the bullock cart, and is mounted on the cart itself, along with a barrel for water or insecticide.

And while he was at it, he also found ways to operate other rural machines requiring electricity, like the floor mills, winnowers and threshers on manual and bullock power. He also devised a floating turbine that uses the power of a running river or stream to pump water from the same stream.

"The effectiveness of these gadgets told me that instead of free electricity, it is possible to develop electricity-free, self-sustaining irrigation systems for farmers," he says.

The rural power-crisis involves more than just irrigation, and very soon Pathak realised that without the means for actual power production, rural India can never be power-self-sufficient.

Initially he modified his Jaldhara pump by installing a pulley and dynamo on its wheel to generate an electric current. The result was what he jokingly calls his 'video-coach bullock cart', so called because the power generated by it is sufficient to run a TV. At a serious level, this system can be used to charge batteries, which can be used for household power supply in a limited way.

Later, Pathak dispensed with the cart and concentrated on the bullock, and invented what he believes to be his greatest achievement yet -- the 'bullock powered energy machine'. Run in the same way as the oil-presses of old (Kolhu in Hindi, Ghani in Marathi), this machine converts the 2 RPM input from a bullock into a 1500 RPM output with the help of a simple gear box. The machine is stationery (no cart is involved), with a long lever like the lever of a kolhu (oil press). A bullock is tied to this lever, and it runs the machine by walking in circles around the machine, like a bull operating an oil press. The circular motion generates electricity.

This machine is extremely versatile -- it can be used to run a five horse-power centrifugal pump, and all small machines like a 1 KV generator, a flour mill, an air compressor and so on. A single machine can run the entire water supply system of a small village. Run for two hours, it can keep ten street lights burning for the whole night.

About the power-generation potential of rural India, Pathak says that there are some 8,20,000 bullocks in Maharashtra. Even if just ten per cent of these bullocks are put to work on such power-generating machines for two hours a day, plenty* of electricity can be produced per day. "So where is the power crisis, tell me?" he asks.

Another subject Pathak has devoted considerable attention to is electric power for rural women. In rural India, the entire agricultural and economic system is against women. Women don't own bicycles and bullocks; and even though most of the bicycle-powered gadgets invented by Pathak can be run comfortably by women, cycling is still anathema for them in many parts of rural Maharashtra.

On a sudden inspiration, Mr Pathak landed on the swing -- a traditional mode of amusement and play for women and children all over India -- as a means of power generation. "The to and fro movement of the swing can be used to run a piston pump ten times as powerful as a hand-pump," says he. The swing pump is Mr Pathak's latest innovation, and can pump water from a depth of 10 metres and up to a height of 30 metres at the rate of 20 litres per minute. Some 10-12 schools in the Pune and Ratnagiri districts are using this pump effectively to pump their drinking water. The swing also has great potential in the area of air-compression and power generation, and Pathak is currently exploring these possibilities.

Knowledge to the people

Pathak's products cost much less than what most power-generation and advanced agricultural gadgets cost. The bullock energy machine, for example, the most expensive of his gadgets, costs just Rs 20,000. The products further save the farmers a packet in electricity bills in the bargain, have found wide acceptance among the rural people of Western Maharashtra. Pathak says his products are popular in the Sangli, Satara, Solapur, Latur and Pune districts and also parts of Vidarbha. He also says he has sold 900 manual water pumps and spray pumps till date and 20 bullock energy machines, along with other products.

What distinguishes Pathak from other inventors is the fact that he has not drawn a patent on even a single one of his inventions. "These machines are all based on very simple principles. I want to spread this knowledge, not hoard it." Pathak has propagated both his concepts and products through various craft, agricultural and technical fairs in the state. Only recently, at an agricultural fair in Latur, 100 bullock power machines were booked by farmers, personally as well as collectively by villages or communities.

In his attempts to spread his knowledge, Pathak has held training camps for rural youth. A few groups are manufacturing a light steel bullock cart devised by Pathak. The Rural Technical Centre in Wardha will also start manufacturing the same this month. Other products are still being manufactured by Pathak alone, because the awareness and acceptance rate of these products are rising, but are still too low for profit-making ventures.

Pathak is dissatisfied with the scale of the work. "We need such training everywhere. How many gadgets can one organisation make and sell? Rural people must learn to manufacture, operate and improvise on such gadgets and even invent their own gadgets to suit their special needs. And the government must invest in such training in a big way."

His own institute, the Modern Technical Centre, employs 9 people. Earlier it was not very sustainable, but for the past two years, the Maharashtra Energy Development Agency has been forking out subsidies of 50 per cent on the products. This has caused the market to grow. Pathak says that last year, the institute sold products worth Rs 10-12 lakh, and this year they expect to cross the Rs 25 lakh mark. Other state level energy organisations are taking note of his work. The Karnataka Renewable Energy Development Agency and the Punjab Energy Development Agency have just contacted him and shown interest in propagating his products in their states, says Pathak.

Pathak's dissatisfaction with the country's present power policy is evident. He points out that the entire accent of our power policy is on exorbitantly expensive, hopelessly centralised production methods coupled with slogans about saving and vigilance against theft which are never implemented. "Privatisation has made matters worse. If instead, it could place its accent on power production by the people, not only would the per unit cost of power come down dramatically, but the entire power problem would become non-existent in a few years."