The coastal village of Velneshwar in Maharashtra is home to a unique well that doubles up as a rainwater storage tank. Shree Padre finds out more about this novel dual-purpose structure.
24 April 2008 -

Can your open well double up as a rainwater tank? The very concept may sound whimsical to many, but not so in the coastal village of Velneshwar in Ratnagiri district of Maharashtra. Such a well  maybe the countrys first two-storied well  has been in function here since four years. This unique well is the brainchild of Dr Chandrashekhar Gadgil and Ravindra Nene, both from nearby Pune.

The picturesque village of Velneshwar derives its name from a deity of the same name, whose temple is located here. Bhakta Niwas, the dormitory of Velneshwar temple, provides shelter and food to the pilgrims. It has a 26-year-old well in its premises. Some years ago, it was observed that the well was drying up by April. As no sweet water was available nearby, Bhakta Niwas had to be closed till the well would fill up again. Since it is vacation time for schools, Velneshwar sees many visitors during summers, says manager Gopalkrishna Gokhale. They enjoy taking a swim in the sea and then again require sweet water for bathing. Since we had no water, we were compelled to inform them not to visit Bhakta Niwas, he says.

Many of the wells in this area dry by April. Since the village is close to the sea, borewells yield only salt water. Out of about 35 borewells in the village, only three to four have sweet water. During summer, the taste of the well water also changes. Though the administration provides tanker water, it is not reliable. As such some villagers have to walk two kilometres to fetch water for drinking and cooking.

Four years ago, to increase the water availability, the Bhakta Niwas well was deepened. At this time, the Ram Chandra Dattatreya Pratishthan, a family trust, chose this village to carry out social work. Dr Chandrashekhar Gadgil, ex-professor, College of Engineering Pune and a key member of the trust came to study the water situation at Bhakta Niwas.

In most open wells, a very small storage area is actually utilised. The percentage of used area goes on decreasing over the years with the decreasing water table. Gadgil wondered if this large dead storage area could be put to use. He wondered if there were any chances of converting it into a rainwater storage tank.

In most open wells there is a large dead storage area. This innovation allows it to be used as a rainwater storage tank.

Since the well had been deepened by 13 feet, a new side wall had to be constructed accordingly. Gadgil came up with two ideas: one was to change the shape of the inner wall from the original square to round. This round shape would also add strength to the well. This round wall would be pushed slightly off-centre, so that it would give space for a side vent. The original big and square shape of the well would now become round with a small rectangular vertical side vent. Gadgils second innovative idea was to convert the upper portion of the well into the rain storage tank. And for this four metres of the top portion of the well were raised by another four metres.

Gadgils friend from Pune -- Ravindra Nene -- an architect and structural engineer gave technical guidance to construct this innovative structure. There was no model that could be replicated. As such, experimentation was the only possibility.

At about 13 feet up from the bottom of the well, a slab was constructed. This served as the bottom of the upper storey, which would house the rain tank. The side vent came in handy for two important tasks  to take out the centering material (wooden props on which the slab was built) after the construction of the slab and secondly to pump out water from the well whenever needed.

The well continues to function in the lower portion. It provides water till around April. Water is pumped up from the well; the suction pipe is introduced through the vertical vent opening. Only after the well dries up, Bhakta Niwas starts using the rain water tank in the upper portion. 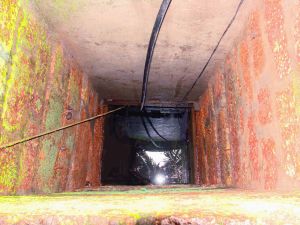 The vent permits pumping of well water and entry for persons when necessary. Pic: Sunil Bhide.

The wall of this four-metre tank is made of Ferro cement. With 72,000-litres capacity, it cost only one rupee per litre for Bhakta Niwas. Roof water from the nearby terrace is diverted to the tank. A temporary covering of corrugated galvanised sheets has been provided. Of course, the drinking water is always boiled.

Was this decision to make two storeys out of a single well taken for economy measures or due to space shortage? For both, replies Gokhale. Nene points out, This sort of alteration to the well is better done during the time of well digging itself. For areas with low rainfall, where the water level does not rise to a considerable height, this innovation is ideal. More so, if there is shortage of space.

But at the time of digging a new well, how would one know to what maximum level the water would rise? Thats not a problem, assures Nene. You arrive at a level observing some wells around. In the monsoon, even if the water table rises above the bottom level of the rain water tank, it wont harm the tank structure. The well owner, as they go on drawing water, will get the water as it will eventually flow into the well.

Four seasons have passed since the Bhakta Niwas well was modified. We are fully convinced about the concept now, avers Gokhale. The stored water remains clean and safe. We havent encountered any problem so far. He is now considering having a permanent closure for the upper portion of the tank.

Dr Ajit Gokhale, a Mumbai based RWH expert who runs a technical consultancy firm for nature conservation, chanced upon this two-in-one well recently. He says, I keep tracking various ways of harvesting water, modern as well as traditional. This is the first time I have come across usage of empty space in the well for creating a rain tank. This is certainly novel.

Does this innovation have scope for replicating? Yes, hopes Ajit Gokhale, It will be handy to cater to the RWH needs in dense population areas where wells have idle storage space. Roof water from nearby can be diverted and stored in such a cistern created within and above the well.