Fixated on eliminating the grounds for disqualification of legislators that arose from their holding of offices-of-profit in the Executive, Parliament has sent back the infamous Parliament (Prevention of Disqualification) Amendment Bill to the President, who is now constitution-bound to sign it. Madabhushi Sridhar points out why the legislation must be stopped.
05 August 2006 -

The Parliament (Prevention of Disqualification) Amendment Bill, 2006, aims to to remove the grounds for disqualification of sitting MPs that arise on their holding of offices-of-profit. The Bill allows MPs to continue their membership in Parliament and also the 'offices of profit' they are now holding. The glaring point is that 45 listed positions are going to be exempt. One notable exemption is the Chairmanship and membership of National Advisory Council, indicating that Sonia Gandhi will be able re-assume NAC chairmanship. At least fifteen positions now held in West Bengal are proposed to be removed from the list of disqualifications obviously to help the Left comrades of the Congress party. This apart, some general expressions figure in the Bill, and these are wide enough in scope to include innumerable other positions of the present and future. Another inexplicable provision is to enforce exemption retrospective from as far back as 1959.

A sweep of exemptions

A number of clauses in the bill are very general and will include at one go, any number of posts as the Executive would wish to provide to Parliamentarians, besides protecting innumerable offices of profit of the MPs.
•  The Bill
(PDF, needs a PDF reader)

•  Offices of Chairman, Deputy Chairman, Secretary or Member (by whatever name called) in any statutory or non-statutory body specified in the Table.

•  Offices of Chairman or Trustee (by whatever name called) of any Trust, whether public or private, not being a body specified in the Schedule.

•  Offices of Chairman, President, Vice President or Principal Secretary or Secretary of the Governing Body of any Society registered under the Society Registration Act 1860 or under any other law relating to registration of societies not being specified in the Schedule. (Note: Not only this, these provisions will be deemed to have been added since 1959)

The Parliament, led by the UPA executive has shown scant regard for its Head, the President of India. President A P J Abdul Kalam had earlier returned the Bill, insisting that there should be a comprehensive criterion that is "just, fair and reasonable" and could be applied to all states and union territories in a "clear and transparent manner". The other two points which he asked Parliament to reconsider were about the propriety of passing the legislation with retrospective effect and the implication of including in the amendment such offices for which petitions for disqualification were already under process by competent authorities. The President is the head of both the Parliament and Executive as per the Constitution of India. The disregard is visible that two constitutional estates refuse to consider the genuine questions pointed out by the Head of the nation, but decided to push it through with brutal majority of the coalition.

Article 102(1(a) provides that a person shall be disqualified for being a member of either House of Parliament if he holds any office of profit under the government of any state other than an office declared by Parliament by law not to disqualify its holder. The general rule in the first part of Article is founded on the need for neutrality and impartiality in the public service.

If the Executive at the state or centre wants to silence a critical legislator, now one of these thousand positions can be legally offered. The Bill ultimately offers such silencing weapons to the Executive, which the Constitution expressly prohibited by Article 102. Because it is common for any ruler to win the support by sharing power and public money, Article 102 is a constitutional necessity to limit such allurements. Article 102 also stems from the separation of power principle between the Executive and Legislature.

Even so, the reason that the Constitution still gives exempting power to Parliament is to secure positions like cabinet minister posts, membership of planning boards or the like. If the Executive wants to exempt any position, it has to come to the Parliament explaining why holding such a position should not be treated as disqualification. This is because the list of posts exempted from disqualifications cannot be added by the government (i.e. executive) orders. It is the mandate of Article 102 that Parliament has to declare the exemptions. It is inevitable therefore for the Executive to go to Parliament and convince it about necessity of exempting each and every post. 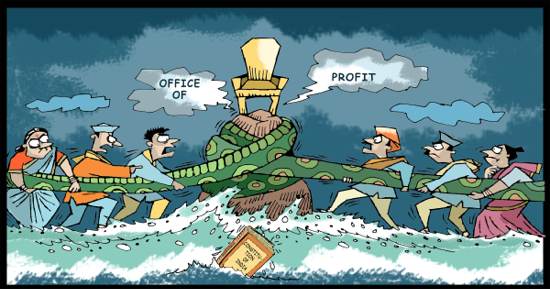 What is the justification for an MP to hold the chairmanship of the Tirumala Tirupathi Devasthanams Trust Board? (This is now being sought to be exempted to save T Subbrami Reddy, Congress MP (Visakhapatnam) and Minister. Reddy is chairman of the Tirumala Tirupati Devasthanams Trust besides being a Union Minister. In fact, the TTD Chairmanship is a very powerful post, and the chairman has a say over projects worth thousands of crores of rupees and wonderful influence over all top layers of society. Why should an MP hold that office? Why cannot that position be given to a non-elected public servant? Does it not encourage the concentration of power in few hands?

It is the duty of the government to explain to the legislature the reasons for exempting this position, and similarly every other position to allow an MP to hold it as an additional office of profit. Legal luminary Fali S Nariman said that for the latter part of the rule regarding exempting power, what is required is an objective assessment by Parliament of such offices of profit under the central government or state governments irrespective of who is holding them. The assessment is to avoid any possibility of conflict between the office so held and the office of MP. But the present Bill does not propose exemption from disqualifications in the sense that framers of the Constitution intended. The Bill is aimed only at enabling private members who already hold such offices of profit to continue to do so with impunity.

When Jaya Bacchan was being nominated to Rajya Sabha, she was holding the position of chairperson Uttar Pradesh Film Development Corporation. She resigned to that office, contested to get elected to Rajya Sabha.

But after election she was given the same office, and accepted it. This was questioned by a Congress legislator, which marked the beginning of great controversy surrounding all offices of profit.

Bachan was subsequently disqualified on that petition by the President of India, after it was duly recommended by the Election Commission. To contest Rajya Sabha again, she resigned the position. The UP government has since passed a law permitting Bachan to hold the position again.

Based on the strength that the Samajwadi Party is enjoying, she is very likely going to be re-elected. Once the President gives his assent to the amendment Bill, she will be able to and may very likely assume the UPFDC's chairmanship.

Sonia Gandhi took an advance step by renouncing her positions both as MP and chairperson of National Advisory Council. She subsequently won back the first. In her case too, once the President approves the Bill, she will be able to chair the NAC again.

•  No need for this amendment
•  Govt proposes, Parliament...

The statement of objects and reasons that accompanies the Bill hopelessly explains that the government wanted to avoid by elections to 40 or more seats all of a sudden, and the necessity to amend has been felt because more than 40 MPs are holding 'offices of profit' which would disqualify them if amendment is not passed. This statement is a confession of the government as to need to disqualify these members for their holding on to offices of profit much against the spirit and letter of the constitution. The colour of public interest is added to it by saying that there will be wasteful expenditure for conducting by-election, for which no government did not bother so far and tried to reduce election expenditure.

To save 40 plus MPs from disqualification, the central government is trying to make a 'permanent amendment' so that all thousands of MPs and MLAs can be entrusted with offices-of-profit for all times to come. It is absolutely unconstitutional. It takes away the entire spirit and purpose of provisions of the Constitution, which are to make MPs independent of the political executive and serve the interests of their ultimate masters, i.e., the people. Even for so called the sudden vacancies, it is the indiscriminate award of positions and offices to MPs that created the problem. This legislation is neither in public interest nor a social necessity. Any Bill, when it becomes a law, comes into effect from the notified date. But this law, if approved, will be deemed to be law from 1959.

The Bill appears to be an effort by a coalition government to survive in power. No other constitutional or democratic principle is involved. The partners of the coalition are also exploiting the weakness of the Manmohan Singh-led government and are trying to save their MPs, having committed same mistake of appointing them to offices unmindful of constitutional restrictions.

Even though from press reports, it appears that the Bill is aimed at saving 56 MPs, which is much less than one-fourth, taking into account the general provisions in the Bill, a reasonable guess is that many more MPs currently holding positions (against whom there is no complaint pending at the Election Commission, and who would be subject to disqualification) will also be exempted. This number may come to as much as one-fourth of the seats in the Lok Sabha. The nation thus is witness to Parliamentarians making law to retain their membership, because by-elections to at least one-fourth seats of the Lok Sabha which might upset the applecart of Manmohan's coalition.

What can the President do?

The President of India has just no option except to give assent to the Bill since Parliament sent it back again to him. Article 111 says that he cannot even withhold the assent, which option was available for him before returning for reconsideration. Article 111 is very clear on this aspect. Article 143 does enable the President to seek the 'advise' of the Supreme Court. Even if the President seeks the advise from the apex court, he cannot withhold the assent. The fact that several legislators would lose the jobs without this legislation is also established. Once president gives assent, it stops the Election Commission from disqualifying any MP.

The only way to stop the legislation is seeking judicial review on its constitutionality. Every citizen has a right to do this.

Dr Madabhushi Sridhar Acharyulu is a Professor at the NALSAR University of Law, Hyderabad.