BUDGET: Why more taxes may be good

It is time for the Union Budget 2013. Shankar Jaganathan argues why, in an economy such as India, despite the general public vote against taxes, raising the tax-to-GDP ratio is more critical than restraint in fiscal spending.

Come February, the much discussed annual ritual of the Union Budget takes center stage. For many taxpayers, budgetary debates are their most involved participation in public policy making. More often than not, these debates centre around tax incentives for economic growth or tax implications on their personal budgets. Given the personal slant of these discussions, it is worth asking if these are public policy discussions or public debates on personal budgets.

On the few occasions, when the discussion turns to public expenditure, the most frequently heard prelude is I am a taxpayer and I have a right to know This almost equates government-taxpayer relationship to the buyer-seller exchanges, ignoring its non-discretionary nature. Probably reflections of the time we live in, these discussions convey the idea that if a referendum were to be held in India today, the urban middle-class will vote against any form of tax, especially taxes that touch their personal budgets. Given this overwhelming idea, can we revalidate from a clean slate the need for taxes?

Rape and murder of vulnerable women and innocent children, political leaders spitting venom in the name of religion, multi-thousand-crore scandals and power abuse by people in office is a daily occurrence captured relentlessly by the 24x7 news channels and newspaper headlines. This poses a serious question, are we living in a civilized society? Do we live in a humane society where individual life and freedom is secure? Probably reflecting on similar issues and using the logic of buyer-seller, the 19th century American writer, Oliver Wendell Holmes remarked ‘I like to pay taxes. This way I buy civilization.

Civilization is a product of an educated mind. Recognizing this in India we have made elementary education a fundamental right for every child. However to translate this intent reality we need public resources that can come only from tax collections. In addition, taxes are also needed to fund other facets of civilization like basic healthcare and old-age care for all in society. India invests less than 3% of its GDP on elementary education and less than 1% of its GDP on public healthcare. 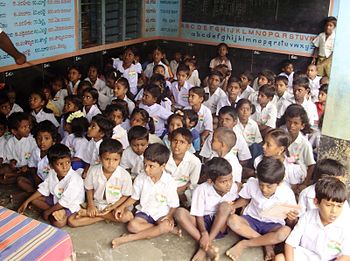 A primary school in Chittoor, AP. Given India's abysmally low public investments, increase in taxes are needed to ensure even the most basic rights, such as elementary education for every child. Pic: Sandeep Gupta via Wikimedia.

Given this state of affairs, is it not logical that our news channels and newspapers reflect the reality of our low public investments? If we want a civilized society, we have no option but to buy it and the only way we can buy it is by paying higher taxes which will fund our social investments.

If the taxpayer is worried about taxes, economists are worried about the fiscal deficit, rightly so since you cant live off borrowed money forever. Looking away from the abstract economy into the more familiar terrain of our personal budgets, we need to see how a layman will approach a fiscal deficit. What would we advise a poor individual, to earn more or borrow less, especially if they need to spend on necessities? Shorn off the euphemism contained in the term 'emerging economy,' every right thinking individual will acknowledge the fact that India is a poor country. If patriotism prevents us from calling India a poor country, we cannot deny that India is inhabited by mostly poor people, a small section of the middle-class, peppered with a few millionaires and billionaires. Given this reality should we not debate on how to increase Indias tax to GDP ratio rather than focusing on reducing fiscal deficit?

At around 17%, Indias tax to GDP ratio is significantly lower than that of USA and Japan at around 30% and less than half of the comparable numbers for major European countries including Russia. A few percentage points increase in this parameter will ensure that our fiscal deficit is manageable even with increased public investments in buying civilization. Incidentally, the fiscal deficit to GDP number for India, even at 5.3%, is about half of the comparable number for USA and UK which is in double digits.

Well wishers who believe the level of economic activity is influenced by tax rates oppose any increase in taxes for its dampening effect. There is a merit in their logic. Hence taxing activities that contribute to human and social welfare should be avoided. But what about activities that have negative effects on the society?

Urban air pollution due to vehicular traffic, drunken driving leading to hit and run deaths and conspicuous consumption depleting the environment are definitely issues that can be addressed by levying what is popularly called the sin tax. Increasing taxes on large cars, SUVs and fuel guzzling vehicles by making it prohibitive will not only enhance public revenue but also reduce public expenditure incurred on road infrastructure and fuel subsidy.

Turning to conspicuous consumption, can we take a leaf out of the Singapore 2012 budget, which provided Silver Housing Bonus for senior citizens shifting to smaller flats? Can we extend this concept and provide tax deductions for housing only to residences below a specified area? This will not only conserve environment, but also increase the public revenue.

To conclude, what this article proposes to do is not provide an exhaustive list of what can or should be done. Instead, the attempt is to provide an alternative lens to view the union budget, where taxes are seen as desirable for building a civilized society and the debate on tax to GDP ratio gets as much attention as the fiscal deficit number. Just as economic reforms without a revised social view is not sustainable, focusing on social justice by ignoring its impact on economic activity is not viable. Balance between these two conflicting objectives is essential. If a tradeoff is to be made in India today, my vote will be to tilt the balance in favour of social justice to keep India together as a civilized society.

Shankar Jaganathan is passionate about corporate governance, sustainability practices and economic history. With two decades of varied experience in corporate, social and academic sectors he divides his time between consulting engagements, teaching and research. He is the author of the book 'Corporate Disclosures 1553-2007, The Origin of Financial and Business Reports', published by Rutledge in 2008. His second book 'The Wisdom of Ants, A Short History of Economics' was published by Westland in November 2012.