Law, justice, and the 'placebo' of compensation

Governments have taken to announcing monetary compensation for victims' kin in cases of criminal acts as well, but it hardly masks their failure to impose the rule of law or bring about systemic improvements, says Harish Narasappa.
06 February 2013 -

Compensation appears to be an act that is at once humane, constitutes 'perceived' good governance and provides succour to the victims. A deeper analysis however reveals that providing compensation is only a placebo - an act that merely gives the impression that justice is being done. In fact, there is no justice but only a charade which seeks to mask the incompetence of our institutions in protecting citizen's rights. 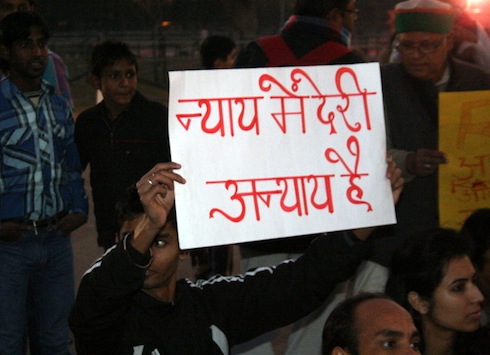 One of the basic tenets of a society governed by the rule of law is that violations of citizens' rights need to be adjudicated and the violator or perpetrator punished. Providing compensation is an added benefit no doubt, but it is the perpetrator who needs to pay both monetarily and otherwise. Successive governments in India however focus mainly on providing compensation as it is something they can do easily and immediately.

Identifying the perpetrators and punishing them takes a long time and is most often very difficult. The inadequacies of our police and judicial system more often than not make this already difficult task improbable. However, it is this process that safeguards the rights of the citizens in the long run and more importantly fixes responsibility on the person or persons responsible for the act. It is this fixing of responsibility in accordance with the law that ensures guarantee of rights, respect for the law and acts as deterrence for future acts. Compensation does not do any of this- it only provides immediate and temporary relief for the concerned victim, but does not benefit either the society at large or the victim's own rights in the long run.

One of the basic tenets of a society governed by the rule of law is that violations of citizens' rights need to be adjudicated and the violator or perpetrator punished. Providing compensation is an added benefit no doubt, but it is the perpetrator who needs to pay both monetarily and otherwise.

Compensating victims (or their families) instead of focusing on upholding of the law and rights of individuals reflects just a continuance of the symptom in our country of governance focused on immediate gains and crisis management rather than long term goals that aim to build strong institutions and ensure that rights are meaningful.

This attitude of compensating for the wrong caused has a lot of unwanted side effects. Recently in Karnataka, newspapers reported that tremendous societal pressure was exerted on the family of a minor rape victim to get her married to the perpetrator of the crime. When the girl's father resisted the pressure, the family was subjected to a social boycott and was threatened, forcing the father to seek police protection. Examples of many rape victims marrying their perpetrators are numerous and are often aided and abetted by the police and the judiciary. Marriage is considered sufficient compensation for the victim and penance by the perpetrator. Taking off from this, government practice appears to be encouraging objectionable, non-pecuniary forms of compensation insisted upon by state actors and society. This is also a slap in the face of legal principles and India's commitment to the rule of law.

Even in cases of tragedies, compensation is generally announced before any analysis of the causes of the tragedy and the identification of people responsible for those causes. The rush to compensate the victims appears to be an effort to ensure swift closure to the incident and to prevent any questions from being raised on the reasons for the tragedy. Governments appoint enquiry committees or commissions which then function for years together collecting data and information about the tragedies. These reports are rarely given any importance when they are finally submitted because the incidents have faded from memory by then and each of the interested victims have received some compensation that has given them a false sense of justice and closure.

Even when the reports receive due importance it is generally a long time before any meaningful corrective step recommended by these committees are taken. In recent times, I cannot think of even a single tragedy that has resulted in the persons responsible being punished and corrective and long term systemic changes being implemented. These reports are dusted off and given a lease of life only when the next tragedy occurs and a noise is made by the media or the public. For example, nearly 10 commissions have enquired into the anti-Sikh riots following the assassination of Indira Gandhi. What has happened to their findings and recommendations?

Unfortunately, compensation cannot address any real systemic problems. It is only a placebo that gives an impression of justice. Compensation is also a discretionary measure adopted by the state and does not follow after rights and wrongs are evaluated. It is not a drug that rights a wrong, punishes the guilty and helps learn lessons to prevent future tragedies and crimes. That can happen only when the state pursues every tragedy or crime with the same seriousness and with a commitment to enforce the rights guaranteed by law. It can only happen when we recognise that mere compensation is not good enough and move beyond it.

Harish Narsappa is a lawyer based in Bangalore.