‘Lighting up’ the lives of the poor

A renewable energy project covering three of Odisha’s most backward villages has gone beyond the immediate promise of providing electricity, bringing about perceptible and deeper changes in the quality of lives of the local people. Abhijit Mohanty reports on the project.

The energy scarcity of rural India has serious implications both for the environment and for users. Meeting energy requirements through fuel wood has contributed to the heavy felling of trees and degradation of natural forest land. The onus of having to collect firewood from far off places has created a life of drudgery for the village women. Women in rural areas are known to spend up to five to six hours of their useful time during the day in fetching fuel wood and cooking.

Children, too, are often involved in collection of fuel wood, sometimes even during school hours. Taking indicators such as time, labour, economics, health and gender inequity into account, we can say that the rural poor pay a much higher price for their energy requirements than other groups in society.

Kashipur is one of the most backward block of the KBK (Koraput-Balangir-Kalahandi) districts in Odisha, with little variance in rural and tribal life. More than 70 percent of the population of the block belongs to Kondh and Paraja tribes. The inhabitants are embroiled in a continuous struggle with a range of issues such as starvation death, cholera, epidemic, migration, environmental degradation and perpetual livelihood insecurity in the absence of any agro-based or other industry. As a result, the mortality and morbidity profiles are quite alarming here.

Although a micro hydel project is located just a few miles away, the block had no access to power over a considerable period of time.  It is apprehended, that grid electricity might not reach these villages in the next 20 years. It is for this reason that Agragamee - a voluntary organisation working for the upliftment of Adivasi and marginalised communities in the Kashipur region – aided by financial support from BMZ/KKS of Germany initiated three renewable energy projects in Ushabali and Pipelpadar villages of Mandibisi Panchayat and Keshkeri village of Siripai Panchayat of Kashipur block in Rayagada district.

The project aimed to dispel energy poverty and socio-economic deprivation through effective use of renewable energy sources in three tribal dominated villages. The explicit objective of the project was to provide energy security to 109 households on a sustainable basis through application of renewable energy sources, within a period of four and half years from July 2006 to December 2010.

In both the Keshkeri and Pipelpadar projects, small dams have been built in the stream flowing downhill and channels have been made to direct a part of the water for irrigation; another part of it is sent through the central basin for impurities to be cleaned, and subsequently sent to the turbine in the power house. The electricity thus produced is transported through low tension wires to light the villages.

As there was no perennial stream that could facilitate a micro hydel plant at Ushabali village, a 3-KW SPV power plant was launched in 2007.

In order to ensure sustainability at an institutional level, three Village Energy Committees (VECs) were formed in all the three villages, as the project was underway. Participation of all beneficiaries was ensured through these institutions. The capacities of the VECs were also developed so that they could manage the functioning of the device, build and manage the maintenance fund, generate income through Natural Resource Management (NRM) and coordinate all aspects. 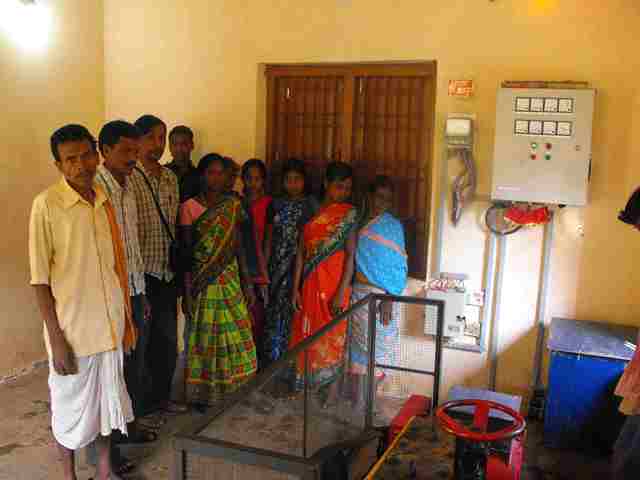 Villagers from Pipelpadar village during an 'exposure trip' to the
Keshkeri micro-hydel project. Pic: Abhijit Mohanty

Towards technical sustainability, two village youths from each village were given specialised training and taken to various exposure visits so that they could operate as barefoot technicians. As a result of the hands-on practical training that they received, they are now experts in handling the equipment in the plants. In fact, they have in turn trained five more people as technicians for their village; together they now manage the operations of the renewable energy devices.

Convergence activities in the village

In the years following the launch of the renewable energy project, several convergence activities were initiated in the targeted villages.

With the support of German Agro Action, a water harvesting structure was constructed in Keshkeri. In 2010, the State Bank of India sanctioned Rs.60,000 for a women’s self help group (SHG), leading to the establishment of a rice and flour unit in the village. The Orissa Rural Development and Marketing Society (ORMAS), under the Odisha government, sanctioned 10 leaf stitching, pressing and cutting machines for the women of Keshkeri.

The local people also raised Rs 3.5 lakh through MNREGA for renovation of the feed channel. With the help of the Department of Forests, Government of Odisha (GoI), steps were taken to save the catchment area and to increase vegetation in the area.

In Pipelpadar village, the forest department sanctioned the construction of a godown for better facilitation of NTFP (non-timber forest product) marketing. US AID (SARI/Energy) also sanctioned a proposal for setting up an agro-processing unit at the village. Such interventions have created a number of livelihood options for the villagers.

Similarly, in Ushabali village, Agragamee was able to raise ten leaf stitching machines and one packing machine through ORMAS in 2008. A trainer from ORMAS helped in capacity building among the village women. 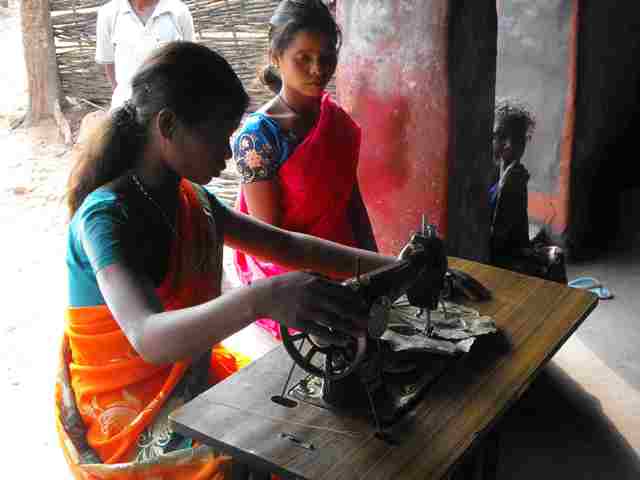 Moreover, with the help of the Department of Forest under the state government, Agragamee and Ushabali villagers have taken steps to boost farming in the area. Through the Department of Rural Development in the government, Agragamee has initiated a “Swajaldhara” project in the village to provide safe drinking water to the villagers. Negotiation is underway with Odisha Renewable Energy Development Agency, a state-owned agency, for convergence in Ushabali Village.

The effect of this project and the activities around it on the lives of the people of all three villages is out there for all to see.

The initial euphoria was evident. As Esi Majhi of Keshkeri puts it, “We continued to work hard in the hope that someday, we shall have power, and when that day came, all men, women and children of the village went on a dancing spree. Now, when the sun sets in the west, we have a light burning bright in every home, on the streets, and in the eyes and hearts of every inhabitant of Keshkeri, Ushabali and Pipelpadar.”

The villagers have stopped the use of fossil fuel for lighting, which means they save the entire money that used to be spent on purchasing kerosene every month. In the absence of kerosene, they would earlier keep the firewood burning to light the room, which caused a lot of pollution. Now, they not only have brighter rooms, but also healthier ones.

An important effect has been that women can now continue to work even after sunset. Sundri Majhi of Keshkeri village points out, “When we had no electricity, we would have to wake up as early as possible, often at 3 or 4 in the morning, for husking millets. Now we can do it in the evening if it suits us.”

Since the women no longer need to come home early to finish cooking before sundown, they can utilise the extra hours to stitch leaf plates, to supplement their income. Today, the village women are selling these leaf plates in the local market, from which each household earns around Rs 500 to 800 a month.

The resulting improvement in socio-economic conditions can be illustrated through the example of Dipai Majhi of Ushabali village, who earned Rs 6300 last year by selling leaf plates; this year, she hopes to raise even more. Dipai has invested her earnings from last year to purchase a pair of goats, which will bring her additional income.

Thus, the lives of women such as Sundri and Dipai Majhi symbolise the economic and social empowerment of the women in the targeted areas, which has ensured more active participation for them in decision making as well.

Yet another positive outcome has been the establishment of the agro-processing units at Keshkeri and Pipelpadar villages. Despite having farm produce in plenty, in the absence of electricity, there was no processing unit in the area. This meant that villagers had to incur unnecessary transportation cost and travel miles only to get rice and flour. The establishment of the rice and flour units has led to significant savings in both time and money.

In fact, these processing units are now also catering to around 12-15 remote neighbouring villages.

In Keshkeri and Pipelpadar, electricity generation saw water being diverted to the fields for irrigation, so that regular water supply was assured. The availability of more time for tending to the fields opened up immense possibilities and villagers are now cultivating a range of vegetables and paddy throughout the year.

Overall productivity has gone up to 40 percent, leading to realisation of additional income worth Rs. 8000 to Rs.10000 per family in a year. As Budaru Majhi of Pipelpadar says, earlier farming was only possible in the rainy season, so that only crops which require minimum water – such as mustard, niger, and millets – were cultivated. However, due to the availability of water round the year from the micro hydel project, farmers now get an opportunity to raise vegetables extensively in the land which lay fallow in the earlier days.

Esi Majhi of Keshkeri too agrees that after the construction of the dam, much of the land has been brought under irrigation and there is significant improvement in agricultural activities. This has in turn enhanced nutrition intake among the family members, especially children and pregnant women. The surplus produce goes to the local haat (marketplace)for additional income.

Last, but not the least considering the extremely low levels of literacy, there has been a thrust on promoting basic literacy, especially among the women in these areas. To that end, convergence activities are planned with the State Resource Centre that runs Community Based Functional Literacy Camps and night schools in these villages.

Most importantly, this project has shown the way for people’s participation at all levels -- planning, implementing, monitoring and managing – of a project such as this. This has resulted in a sense of ownership of the whole process among villagers. Villages along the peripheral areas, too, are now using these three villages as platforms for social interactions.

t is clear, therefore, that this project has not only solved the energy scarcity in these habitations, but brought about a holistic improvement in lives and livelihoods in this geography through convergence of many schemes and initiatives. It has been an eye-opener that a rural community welcomes technology and can itself play a huge role in the process of establishing energy security through renewable sources.

Several villages have now expressed interest in exploring solar lighting systems. It is expected that Kashipur will show the way in harnessing the renewable energy abundantly available in the region.