A limited 'tribute' to an unlimited legacy

Instead of bothering itself with luxury pens, a truly egalitarian society would focus its attention on the emancipatory possiblities inherent in wielding a pen, write Venu Madhav Govindu and Deepak Malghan.
07 October 2009 -

In 1919, when Mahatma Gandhi took over the leadership of India's freedom movement, he also inherited the English language journal, Young India, started a few years earlier by the Home Rule League. After taking full charge of the journal, in his first editorial written on October 8 1919, Gandhi explained a radical decision he had made. Young India would be run solely on the subscriptions of readers and would not carry any advertisements.

Characterising advertisements as a curse, Gandhi argued that "but for our criminal indifference, we would decline to pay the huge indirect taxation by way of mischievous advertisements". By rejecting the lure of advertisement revenue, Gandhi forged a path-breaking compact with his readers. The fortunes of Young India would be tied to the larger cause of swaraj that it advocated.

Ninety years on, however, the corrosive effects of an advertisement culture are all around us. Specious advertisements and celebrity endorsements have become ubiquitous. The disconnect is so deep that some manufacturers are even willing to use the Mahatma's name to peddle their wares. A prime example is the recent launch by Mont Blanc of a limited edition Mahatma Gandhi luxury pen.

Named after a man known for his frugality and simplicity, the pen is priced modestly at Rs.14 lakhs. With a rhodium-plated gold nib, the pen comes entwined with a gold wire meant to evoke the simplicity of the coarse khadi that the Mahatma spun everyday! The limited edition consists of 241 pens, we are told, to commemorate the number of miles of the Salt March to Dandi. In our naivete, we thought that both history and price inflation by artificial scarcity would have been better served with only 79 pens - one for each of the marchers selected by Gandhi. However we must concede that although lacking a sense of irony, Mont Blanc certainly has a good nose for profit. 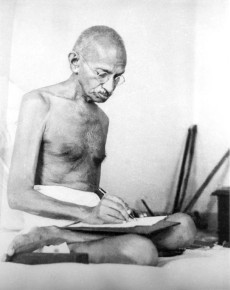 Named after a man known for his frugality and simplicity, the Mont Blanc pen is priced modestly at Rs.14 lakhs. (Photo source: Wikipedia)

•  How not to remember Bapu
•  The absent celebrant
•  The guarded tongue

As a marketing idea, naming a product after the Mahatma is hardly novel. While there have been few individuals willing and able to follow in his footsteps, there has never been a dearth of crass exploiters of the Mahatma's public image. Mont Blanc is only the latest link in a long chain that goes all the way back to beedi manufacturers in the 1920s. However, while the beedi at least has the virtue of being plebian, the elitism of a luxury pen is both morally abhorrent and aesthetically vulgar.

A 'limited-edition tribute' to the Mahatma contradicts one of the central legacies of the freedom movement led by Gandhi - 'unlimited' participation from all sections of society. Although public and social life in independent India has been a direct repudiation of the principles and values that the Mahatma represented, this pen does something worse. By trivialising our history and commercially exploiting the Mahatma's name, it invents a new form of banality.

Aside from leading the independence movement, Gandhi spent his entire life trying to infuse a deep sense of democracy and egalitarianism into society. By divesting himself of the accoutrements of life, he sought to identify himself with the ordinary people of his land. Gandhi's call for swadeshi as self-reliance resulted in many interesting experiments across the land. In the 1920s, the Rajahmundry based goldsmith K V Ratnam was inspired by the Mahatma's refusal to use foreign pens to take on the challenge of manufacturing an Indian writing instrument. A decade of experimentation resulted in some of the earliest swadeshi pens and in 1935 Gandhi was duly presented with one.

Staying with the theme of pens, a related need was indigenously produced ink and the solution was independently provided by a now-forgotten but remarkable constructive worker from Bengal, Satish Chandra Dasgupta. Trained as a chemist under the legendary Acharya Prafulla Chandra Ray, Dasgupta made his mark while working at Ray's Bengal Chemicals. Under the Mahatma's influence, he quit his position and spent the rest of his long life promoting both the practice and principles of a local economy. While he established the Khadi Pratisthan at Sodepur and played a key role during Gandhi's tours in Noakhali, Dasgupta was also a gifted and prolific inventor.

The engineering equivalent of a green thumb, he is credited with numerous inventions and improvements of many traditional village industries that seldom got the scientific attention they deserved. One of his many contributions was the development and manufacture of a swadeshi ink that was marketed for many decades under the popular and felicitous brand name of Sulekha.

Gandhi's concern for individual welfare lead him to distinguish between man's basic needs and human acquisitiveness. As a result of his democratic temper, Gandhi argued that a thing could be considered beautiful only if it could in principle be made available to all. Tested against that principle, the Mont Blanc pen is a moral and aesthetic failure.

Gandhi was ever keenly aware of the dialectic between ends and means. Indeed, Gandhi saw ends and means as part of an undifferentiated continuum and there was never any end that justified the use of less than honourable means. As a self-proclaimed bania, he was hardly shy about raising public money for many causes. However, as a champion of social and economic justice for the masses, Gandhi's moral universe had no room for the convenience of charity. He would have rejected outright Mont Blanc's donation reportedly meant to help rehabilitate exploited children. Rather, Gandhi would have pointed out that exploitation is an intrinsic part of a society that celebrates a writing instrument that costs more than thirty-five times its average annual per-capita income.

Any gesture that commemorates the Mahatma necessarily has to subject itself to the litmus test of satya and ahimsa. A truly egalitarian society would dwell on the fact that a pen is a means to a noble end. Instead of bothering itself with luxury pens, it would focus its attention on the emancipatory possiblities inherent in wielding a pen.

Venu Madhav Govindu and Deepak Malghan are both academics based in Bangalore.