This 58-year-old illiterate farm labourer has developed irrigated farming at a hilltop in the Dakshina Kannada district of Karnataka. His hard work, vision and never-say-die attitude have turned the land around and he now advises visiting farmers. Shree Padre reports.
14 May 2008 -

Farmers who visit Amai Mahalinga Naik's two-acre plot on the hilltop near Adyanadka in Dakshina Kannada district of Karnataka return spellbound. Irrigated farming at this height is very surprising. This 58-year-old illiterate farm labourer has developed this with his own labour. His hard work, vision and never-say-die attitude have turned around destiny in his favour.

"There was no greenery here," says Naik. "This was a barren hilltop where only some dry grass grew earlier," he recalls. The neighbouring areas that are still barren corroborate his statement. 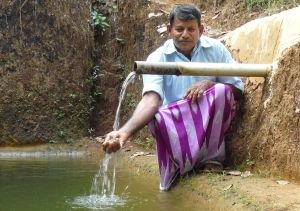 The fifth suranga that turned the tables. Pic: Shree Padre.

A skilled farm labourer since his teens, Naiks main occupation was harvesting arecanut and coconut. As a freelance harvester, he earned the goodwill of the surrounding garden owners. One such farmer helped him to get this two-acre plot on the hilltop on assignment from the government. This was in the late seventies. First, he built a small hut and started living there with his wife and children. The land had a natural slope. Naik had always dreamed of developing an arecanut farm of his own. Now, though he owned land, the odds were against him. To plant arecanut, the land needs to be leveled.

The possibility of getting water was also rare. To dig an open well, he needed money to pay the workers. It had to go very deep to strike water. That would have been prohibitively expensive. Chances of collapsing were very high. So, an open well had to ruled out. At this juncture, the idea of suranga struck to him.

Four failed surangas, and success in the fifth

It was the only option. For one, he could himself do the digging in his spare time, while still earning his daily wages. Harvesting of coconut and arecanut is a half-day affair. In the afternoon, like a one-man army, Naik would dig a suranga. The work progressed. But the moot question remained: Will I get water?

The villagers called this is a futile exercise. How could water be there at that height was the question. Mahalinga Naik turned a deaf ear to these murmurs. Though the first suranga was a failure, he did not stop his efforts. One after another, he dug four surangas painstakingly. In total it must have taken him more than a years spare time. But there was no jeevjal anywhere!

Anybody else would have been disappointed at this stage. But not Naik. He went higher on the hill and started digging. A passing villager told him, The only way to get water there is to p--s. To this Naik replied, Keep waiting, one day I will direct this water through a pipe and grow a garden here.

After the success of his fifth suranga, Naik has dug one more. This supplies water for drinking and domestic use. He has constructed three separate tanks to store the suranga water. Irrigation is done with sprinklers and hose-pipe.

This time, lady luck smiled on him. He struck a good water source. The next task was to level the land. His wife Lalitha could not offer much help as the children needed looking after. But Naik was undeterred. He dug the soil, filled it in a basket and transported it supporting himself on his knee - a very hard task for anybody to do continuously. Using this strenuous method, he created four level plots in a phased manner. Once the water was assured, he planted 300 arecanut trees, 40 coconut trees and some pepper vines. All are yielding now.

Since the terrain has a slope, good soil conservation steps were inevitable. Wherever lands are leveled, the end with freshly leveled soil needs to be protected with stone walls. Unfortunately, there were no stones nearby. Everyday, while returning from work from the valleys, he would bring a stone on his head. With such small but consistent efforts, he was able to construct stone walls by the sides of all his leveled plots. In total, these walls must be made of around 5,000 to 6,000 stones. If done today, it would require at least 200 man-days just for the construction. As per the present wage rate, this would require around Rs.25,000. Bringing the stones from half a kilometre distance would be more costly.

After the success of his fifth suranga, he has dug one more. This supplies water for drinking and domestic use. He has constructed three separate tanks to store the suranga water. Irrigation is done with sprinklers and hose-pipe.

Unfortunately, six years ago, he fell down from a coconut tree while working in a nearby farm. With a fractured leg, he had to be treated in a city hospital for months. This accident swallowed Rs.70,000 of his hard-earned savings. Thereafter, he had to bid goodbye to tree climbing. Though he is able to attend to small works, climbing trees and squatting is painful.

Acknowledging his hard work and self-development, Varanashi Agricultural Foundation (VAF) of Adyanadka presented him Varanashi Farmer of the Year Award in 2003. Though illiterate, he takes interest in new developments in farming and attends many farmers meets. On hearing about rainwater harvesting in one such meeting, he implemented it silently. In the topmost portion of his property, he dug hundreds of percolation pits. In addition, he made some checks in the drainage channel above his plot that takes the run-off away. These steps have benefited me a lot. If only we check the rainwater, there wont be drought. Now the water flow from my main suranga has increased considerably, he says. 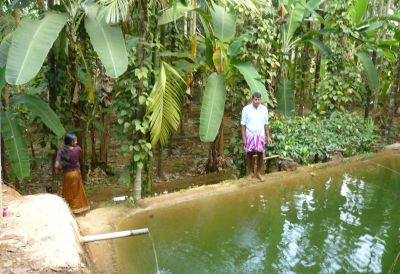 Recently he built a small tank to collect all the grey water (water used for washing and bathing). When full, this is used for irrigation. In a small area, he grows azolla as food supplement for his cows. Agricultural wastes are composted before using them as manure.

Under the influence of the organic movement being spread by VAF, Naik has completely bid goodbye to chemicals. Aided by his wife, he grows a variety of vegetables - cowpea, sweet potato, brinjal, ladies finger, etc. These are also irrigated by the suranga water.

One innovation of his is to raise a small bund inside his suranga. Says he, With this, my suranga acts as a temporary tank. Once it fills, I use it to irrigate my plots located downhill. The water flows because of gravity. This enables the sprinkler jets to work there.

Another interesting personality in his farm is his dog, Bollu. When Bollu was young, he used to play with ripe arecanuts. Mahalinga has trained Bollu to collect arecanuts. Today, it picks up all the arecanuts from his farm. Naik just accompanies Bollu with a basket in hand. It takes half an hour for Bollu and the master to complete the chore everyday.

Naik is a soft-spoken man; he doesnt curse anyone or complain, even though he fell while working in somebody elses farm and that has cost him dearly. He is a symbol of optimism. Im able to run the family happily just because I dont spend much and dont booze, he shares his secret. Except for occasional hand loans from relatives, he hasnt borrowed loan from banks. The only time he has got government subsidy was while constructing his house, that too only of Rs. 1000. I always plan my days so that at the end of the day, I should save at least five rupees and not end up as a borrower, he says.

Dr Varanashi Krishnamoorthy who heads VRF says that Mahalinga Naik is a role model for many small farmers. He notes that VRF gets many visiting farmers groups asking for different kinds of information. "We send some such groups to Naiks farm. We also suggest them to pay a fee of Rs.250 for the time he spares for them. This year, we must have sent quite a few groups there. They are happy to see his one-man development first hand, he says.