'Laws are a springboard'

''First - there is a law, then there is awareness, then comes assertion and then action,'' says Leila Seth, former Chief Justice of Himachal Pradesh and first woman judge at the Delhi High Court. Charumathi Supraja caught up with her in Bangalore recently.
16 October 2010 -

Mother in Law  was how a London newspaper described Leila Seth  the first Indian woman to top the Bar exams in England, in 1957. The newspaper carried a picture of the beautiful, young woman holding her infant son, born a few months before the exams. Another newspaper "lamented" the death of "the ideal of womanhood" in an editorial. "Of five hundred and eight students who wrote the Bar exam, one hundred and fifty two passed, ten gained distinctions and a woman  a married woman  topped," it sighed. 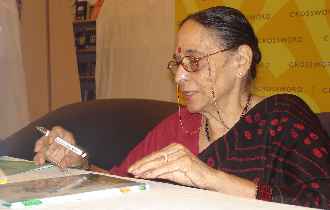 About 21 years later, a High Court Judge was intently studying a judgement cited by a lawyer in an Indian courtroom, when a mob of farmers dropped by. The reader explained that the farmers were in Delhi on the Prime Ministers invitation, "to see the sights." "Theyve been to the zoo and now they have come to see the (sole) woman judge in the Delhi High Court." Leila Seth retired at sixty two, as the Chief Justice of Himachal Pradesh, in October 1992.

In late July, Leila Seth was in Bangalore to release her book We, the Children of India - The Preamble to our Constitution at a Crossword Book Store. She struck an immediate rapport with the children in the audience.

Disturbed by "the lack of focus" among young children and worried by how "consumerism, communalism and corruption" were impacting children, Leila Seth decided to write We, the Children of India - The Preamble to our Constitution.

The book is her effort to raise "awareness and consciousness" about the values that the country is rooted in, especially among children. "The Constitution is the most important book in the country. I hope every Indian child will know the essence of the Preamble. It must become part of them, part of their daily living," she said. Children will be receptive to such ideas as they have an innate sense of fairness and justice, she said. "We have the freedom to think and choose in our country," she pointed out. "This is not so in all countries. We need to use this right. You have to speak up, not only for your rights but also for that of others."

Yet, it was not easy to transpose the Preamble and the Constitution to a childs context. "What is a citizen?" asked her granddaughter, when Leila spoke of being a "good citizen." "I used my granddaughter as a sounding board as I wrote this book," Leila Seth shared.

The result of this collaboration and some beautiful illustrations by Bindia Thapar is a very significant and readable Puffin book priced at Rs. 150.

Leila has already written her candid and rich autobiography On Balance. In that book, she speaks intimately to the reader, of her lifes journey. A strong thread of humour runs right through the story in which she shares how she overcame her fears, grew in a nourishing marriage, raised three remarkable children and juggled court struggles with personal dilemmas. Interweaving the personal with the political, her account brings alive events and people that younger persons may have encountered in history books. On Balance is packed with insights on life, non-discrimination, religion, history, marriage, parenting, travel and law, among other things.

As Leila Seth spoke to me in Bangalore after the release of We, the Children of India, she showed none of the strain of having had to be "equal plus" to be taken seriously, during her long, legal career. Shes serene, smiles spontaneously and speaks from a depth of understanding.

Is it someones birthday today? You have a family history of releasing books on birthdays

(Laughs) Youre right. On Balance was released on Premo, my husbands, 80th birthday and Vikram (Seth) released his book Two Lives on my 75th birthday. Youre right but today is not anyones birthday. I am in Bangalore to attend an event organised by Childrens Movement for Civic Awareness (CMCA). Theyre turning 10 tomorrow and wanted me to be part of the celebration. They read my book We, the Children" and said this is exactly what we are talking about too. Linking birthdays with book releases gives us a deadline to finish the book. Unless you set a date, nothing happens. You wont write.

Being a lawyer by profession, what kind of writer are you? Are you disciplined?

As I said, unless you set a deadline, nothing happens. I should have written this book four years ago. I was thinking about it and talking about it and once Vikram said to me, "why dont you just start writing?" And then I started. When I did, I had all those difficulties in adapting the language and content for children Im not a disciplined writer in the sense that I write everyday for a few hours. There are days when I dont write. But I set myself a deadline and finish by then.

As a legal expert, what do you think can pave the way to a just and equitable society? Laws barely protect; have a backlash and are even misused. The Domestic Violence Act, Anti-Dowry Laws, Decriminalising of consensual homosexual behaviour have hardly been able to change societal attitudes. So what do you think will?

I dont agree. Laws are a springboard. They set you a way, a vision, a target. Implementation takes time. Today, if youre talking about domestic violence of course, domestic violence is taking place but there is something that is working on peoples minds.

Ill tell you an instance. The law has changed for women to have equal rights in their fathers property in 1955-56. Yet, there are many brothers and sisters who dont share the property. In 1986, 30 years after the change in the law, I saw a case in the court when the brothers brought me affidavits and said our sisters have signed and said they do not want a share in the property. I met the sisters separately and asked them why they were signing away their property. They said they come from lower middle class families. "If we want to go on a holiday with our children, we can only come to our brothers house as our father is dead. We cant afford to antagonise them." The women were aware of their rights but not willing to assert.

First - there is a law, then there is awareness, then comes assertion and then action. It takes time and different amounts of time among different categories of people. In some cases it is the more educated and more affluent who assert, but in some cases they are the worst  like in female foeticide, the more affluent are doing the worst.

In your autobiography, you described yourself as having grown from a "shy and frightened girl" to someone who is "willing to fight for change, though in a quiet manner." How did that change come about and how did you cope with gender bias which must have been a very real thing in the times that you were starting practice?

I was shy and frightened when I was in school and little later. I got bolder after I got married. My husband is a great source of strength. He is a very open person, very different from me. He pushed me. He is the one who made me bold. Thats not always the case. In my generation, how many men had the courage to see their wives being better known or supposedly doing better than them? It might hurt their pride. My husband was always proud of me. That gave me the courage to fight the bias in the courts.

In the Patna High Court, clients and lawyers would ask - "Unko kyon case de rahe hain? Ye ladies kya karenge?" ("Why are you giving her the case? What can these women do?") There were lots of people to pull me down. You had to be "equal plus". You had to be better than the men to get the case.

Once, a solicitor sent me a brief for an opinion which I gave. I never heard from him and was unsure of whether I would get paid. When I met him at a party he said his client had sent back the opinion asking for "a male opinion." The solicitor had tried convincing the client that I was a "young, intelligent lawyer whod worked hard on the case". The client would have none of it. So he sent the brief, with my opinion, to a senior lawyer, who kept it for months and then wrote in that he endorses every word of my opinion. I knew that the solicitor would have hesitated to send me more work if the senior lawyer had not endorsed my opinion, knowing that all his clients would want "male" opinions. Things have changed quite a bit now, I would say.

Your mother put her foot down and said you cant be a nun. You seem to have been a very different kind of a parent.

Thats to a great extent because of my husband. He was always bolder than me. When Vikram said he wanted to be a poet, I said he should take up a World Bank job and work for at least 5 years so he can earn a pension and support himself later. Vikram felt his creativity will wane by then. My husband pointed out that Vikram had been getting such prestigious scholarships. "If other people can have faith in him, why cant we?"

My second son, Shanthum, learnt boot and shoe manufacture and later decided that was not what he wanted to do. He pursued Development Studies and is a Buddhist teacher now. (Daughter Aradhana is a film art director.) You must give your children the space to grow. We all need space to grow in our lives, whether were adults or children.

The writer is an independent journalist based in Bangalore.