It is plain for all to see that untreated mining waste is being discharged into the river around Khamaria, but it is equally plain that the government is doing nothing about it. Kanchi Kohli reports.
31 December 2009 -

At first sight, Khamaria seems like a prosperous Indian village, with its neatly carved-out alleys, and its systematically designed mud homes. The Kelo river runs through its forests and irrigates the agricultural lands. The village is easily accessible from the highway connecting it with the rest of Chhatisgarh and the world beyond, and homes here are linked to the state's power supply grid. But with all these apparent advantages, there is despair too - the water that nourished this and neighbouring villages is turning black.

Upstream of the Kelo's waters near Khamaria is a massive operation of an underground coal mine owned and controlled by Monnet Ispat and Energy Limited. As the crow flies the mine is about three kilometres from Khamaria, and a winding road journey would take about five kilometres. "That's the source of all the muck in the river", remarked one resident of Khamaria, looking at the coal deposits choking the river's flow (this was on 5 December, when I visited the village). He added, "In fact what you see today is only the remnants of the gushing discharge that that engulfed the river just a week ago".

The Kelo is not just the lifeline for those who live in and around Khamaria. It is very important drinking water source for all of Raigarh district, and also a critical tributary of the river Mahanadi. The river is already facing impacts of pollution at points closer to Raigarh city where a lot of the industrial effluent is visible.

I travelled to Khamaria along with Ramesh Agrawal and Rajesh Tripathi, committed social and environmental activists who have been consistently and fearlessly taking on polluters for the last five years. They have been tracking the misdeeds of all those who flout environmental regulations, and in doing so impact people's lives and livelihoods in this region. Khamaria, they say, is just another example of the truth that industrially burgeoning Raigarh district faces today. 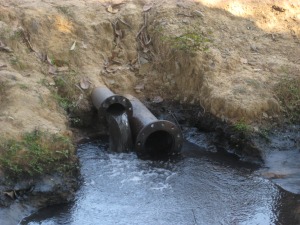 The Kelo is not just the lifeline for those who live in and around Khamaria. It is very important drinking water source for all of Raigarh district. (Above: Discharge into the Kelo river near the site of the mine. Picture by Kanchi Kohli).

Monnet Ispat's underground coal mining was granted environment clearance in the year 2000, for mining operations in Meelupara and Kondkel villages in Gharghoda taluk of Raigarh district in Chattisgarh (at that time in undivided Madhya Pradesh). The clearance was granted under the Environment Impact Assessment Notification, 1994 for an area of 860 hectares, with a targeted production capacity of 1.1 million tonnes/annum.

What is important that the clearance was granted with a set of 17 general conditions and ten specific conditions, clearly laid out in the letter issued by the Ministry of Environment and Forests (MoEF). These conditions are clear that waste water treatment should take place within the leased area for mining. But residents of Khamaria were certain that discharge from the mining area was discolouring their waters.

At first it was difficult to find the source of the coal waste, since various small water bodies in the area are all full of such discharge. But a chance encounter with a local villager riding his bicycle helped; he pointed us a spot where the action was. Just outside the Kondkel mining site is a tarred road, beyond which lie the lands of the forest department. Between the road and the forest areas runs a nala draining into the Kelo; its flow is fed from a rusted pipe laid under the road. The black discharge that was everywhere downstream was coming from this pipe. As the water flowed into the adjoining forest, or was diverted innocently to irrigate agricultural lands, the waste coal was left behind.

Using a handheld GPS (Global Positioning System) receiver, we traced the flow of the coal waste. Along the way, we discovered we discovered more coal discharge at another nala (Doma) that also feeds the Kelo river towards Khamaria and other villages. Clearly someone was depositing the waste from coal mining into these streams, and not bothering to spend money cleaning up the waste.

But who? Monnet is the obvious candidate, since it holds the mining leases for lands on the other side of the road (from where the pipe runs into the stream). But in order to conclusively trace the discharge to the company's operations, it will be necessary to look inside the premises too. However, this is easier said than done. Throughout the district, the money power of industrialists shields such illegal actions, usually under the banner of 'development' and 'progress', and locals as well as environmental activists have made only limited progress in opening up industries to scrutiny. 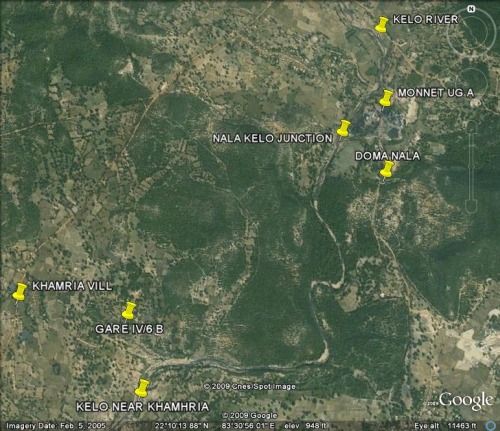 The Monnet underground mines (near the top right corner of this image) are upstream of the Kelo from Khamaria and Gare villages.

Thus, even thought it is clear that the area needs scientific enquiry and executive action, such actions by the government are not imminent. The residents' distress is visible. "We need to ascertain these facts scientifically and need help to do that honestly. This is not just for Khamaria but also for other villages like Lamdarha, Gare, Kosampali, Kondkel, Kunjemura and Tamnar", says Dr.Harihar Patel, a resident of nearby Gare village who helped the visiting environmentalists (I was one of the group) make contact with the residents of Khamaria.

Dr.Patel, a practising ayurvedic physician and acupuncture specialist, has noticed the failing health of the people of the area and heard repeated complaints of fellow villagers regarding the regular discharge from the Monnet underground mine. He is determined that things should not get worse, as they might if other mining companies also start their operations in the area (the Jindal group has shown some interest). He owns a large portion of the lands that interest the mines, and this has helped him ward off the threat so far.

Meanwhile, the Kelo continues to carry the illegal coal waste along its course to the many villages that dot its flow. Desperate villagers find no help from the various institutions of government that are supposedly established to safeguard the public interest - the environment, public health, pollution control and other wings. Instead, in Khamaria too, the victims themselves are left to confront the threat to their lives and livelihood.