Biogas plants are not new, but their size, relative unwieldyness and reliance on large quantities of cattle dung have held back their potential attractiveness for the domestic cooking sector. That may change soon, thanks to the ingenuity of Dr Anand Karve. Vinita Deshmukh reports about Karve's new award-winning compact plant.
10 July 2006 -

Swati Gokhale has built a modest bungalow in one of Pune's prominent suburbs. Until six months back, her husband, a retired executive, had to travel several kilometres in his car, to get the LPG cylinder refill. She read about the unique biogas plant developed by internationally acclaimed scientist, Dr Anand Karve that requires vegetable and food waste as raw material to make fuel, in one of the local newspapers. She urged her husband to install it, which he did about six months back for Rs.7075, and since then, her cost of domestic fuel has drastically reduced.

The prominent Ghole Road ward office of the Pune Municipal Corporation (PMC), which has installed Karve's demo biogas plant, is attracting enthusiastic visitors, especially after Dr Karve recently bagged, for the second time, the prestigious UK based Ashden Award for renewable energy, 2006. Ward Officer Jayant Bhosekar states that, "In the last eight months, we have helped install these biogas plants in two households and several institutions in our ward area. The PMC has come forward to propagate this unique plant as an environmental measure that takes care of the wet garbage."

As of today, around 700 rural homes and 100 urban homes in Maharashtra are using this new biogas plant. Karve says that he has given presentations to institutions and entrepreneurs in Philippines, Thailand, Vietnam and Cambodia, after which many have shown interest. 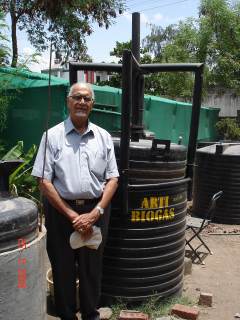 So why has this biogas plant created a stir in international scientific circles and aroused curiosity amongst people? The conventional biogas plant works on human or animal excreta. To produce 250 gms of methane, you require 40 kgs of excreta. It takes 40 days for this to decompose. In sharp contrast, Karve's innovative 'new compact biogas technology' method requires 1 kg of starch or sugar (in the form of vegetable waste, flour collected from the floor of a flour mill) and just 24 hours to produce 250 gms of methane gas. Karve articulated this in November 2003 in a premier science journal, SCIENCE, in the form of a letter, as a response to another article on decreasing indoor air pollution caused by domestic fuels. The scientific community sat up and took notice.

Says Karve, "In theory, textbooks tell you that methane gas is produced from sugar, starch, cellulose and fat, so I decided to replace the traditional dung with food waste and found that it is highly efficient and less cumbersome to use. In fact, earlier, a German scientist had embarked upon this experiment in Hawaii by using pineapples as raw material but they had got acidified. Hence, everyone was convinced that use of dung is the only answer."

However, he also adds that the use of cattle dung as the feedstock is the main factor limiting widespread use of methane as household fuel in rural India. Current domestic biogas plants require about 40kg of cattle dung (from 6 to 8 heads of cattle) every day. And because the dung has a retention period of about 40 days, the size of the biogas plant is also large, he says. "Restriction of space, money and absence of sufficient animals prevent many aspirants from having a biogas plant based on this technology," he points out.

He elaborates: "Common sense tells us that the energy output of a system must be matched by the input. Methane has a calorific value of 11000 kcal/kg. If one wants a high output of methane from this system, it must also receive input having a correspondingly high calorific value." However, going from theory to a compact biogas plant did not materialise automatically. 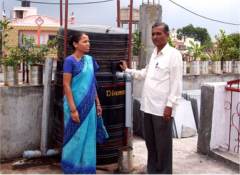 The Dhanjads from Kedgaon village in Amednagar district have installed the new compact biogas plant on their terrace. Pic: ARTI.

Karve's NGO, Appropriate Rural Technology Institute (ARTI) embarked upon the more accessible technology in 2003. He says that starchy or sugar material can be used to produce 250 kgs of methane per tonne of feedstock (on dry weight basis) and that the reaction takes only one day to complete in the case of a household biogas system. Mapping that to regular daily usage, Karve says: "Application of just 2 kgs of feedstock is enough to daily provide a nuclear family with sufficient biogas to cook all meals. Since it requires lesser space and the raw material is a part of each one's kitchen, it has an advantage over the conventional biogas system." In his compact version, the pipeline is drawn from the biogas plant outside the home, and is directly connected to the gas stove. One can cook any number of times during the day. The biogas plant comes in various capacities and the user has to choose the appropriate capacity.

It was an acid test for Karve, when scientists from UK came down to Pune to assess his claims and to see for themselves whether he fitted the bill for the Ashden Award. Says Karve: "They visited 40 households in various villages and towns which are using this new compact biogas technology and kept asking each user, whether only food material was used or was it used along with dung. They could not believe that dung can be done away with. They were convinced only after the extensive survey." And of course they thought it fit to crown him with the coveted prize.

The UK based Ashden Award is the world's most prestigious award for innovative work in environment in developing countries. The criteria being "excellent, practical yet innovative schemes, demonstrating sustainable energy in action at local level." Karve won a cash prize of Rs.30 lakh and is channelising it towards improved technologies for domestic cooking in mass and to create rural entrepreneurs who would manufacture and sell these technologies. For this, he has already got a grant from the Shell Corporation of around Rs.2 crores. Says he, "I am raising an equal amount and the Ashden money has helped me towards achieving the goal."

The Ashden Awards website says that: "At the heart of the Ashden Awards is an annual competition to identify and reward organisations which have carried out truly excellent, practical, yet innovative schemes, demonstrating sustainable energy in action at a local level."

This unassuming and dedicated Pune scientist hails from the legendary Karve family, renowned for social reforms since the 19th century. His paternal grandfather was the illustrious Maharshi Karve, whose social reforms in the late 19th century and early 20th century revolved around emancipation of women  particularly, widow re-marriage and women's education. To serve as an example, Karve himself married a widow and opened an educational institution dedicated to women, called the Hingne Stree Shikshan Sanstha which is still a premier women's educational institute in Pune. His uncle, R D Karve (Maharshi Karve's son) pioneered the family planning movement in India in early 20th century, thereby shocking the sensibilities of the conservative Indian society. Undeterred, he continued to champion the cause of women's health and campaign against its deterioration by frequent pregnancies.

Carrying on the torch of social reforms is Anand Karve, whose life is dedicated to upgrading the everyday life of Rural India. According to the World Health Organisation (WHO) estimation, about three million people die every year due to exposure to suspended particle matter in the air and that 85 per cent deaths are due to indoor air pollution. States Karve, "The indoor air pollution is caused mainly due to traditional cook stoves using traditional biomass based fuels. The estimated deaths in India come to 500,000. Methane as cooking fuel would prevent these deaths."

Karve who has developed various agro-based innovative technologies since the 1960s, after he attained his Ph D in Botany from Tubingen University Germany, rues that the Indian government is indifferent to private scientists working in this country. Even after the Ashden award, the Indian government has not sent him any note neither of appreciation nor has it approached him. He also adds, "Government scientists look upon us as competitors." According to Karve, scientists working in government organisations are hardly effective, as they work under a bureaucratic system, which is often dictated by the whims and fancies of the ministers. "Hence, creativity is killed. To give you a couple of examples, it's been 25 years since the Light Combat Aircraft and Automatic Submarines are being designed but they have yet to be operational in the Indian Army and Indian Navy respectively," he says.

In 2004, Karve won the Ashden Award for producing charcoal briquettes from sugarcane trash (leaves), which has no value as cattle fodder. The leaves also decompose very slowly and hence have to be burnt before the next crop, thus causing air pollution. Karve, along with his daughter, Priyadarshini, also a professor of engineering and a young scientist, prepared a charring kiln, which makes char out of sugarcane leaves. The char is powdered, mixed with a suitable binder and shaped into briquettes. Considering that Maharashtra alone accounts for 4,000,000 tonnes of trash of sugarcane leaves, the potential benefits are astounding. Karve has also designed several improved choolahs and special cookers for the rural housewife.

That Karve's innovations are gaining popularity in society can be gauged from a visit to his humble office in a far off suburb in Pune. The telephones constantly ring from potential customers from all over Maharashtra enquiring about the biogas plant, choolahs, cookers and charring kiln. There's also a constant stream of visitors, who want to know more about his technologies or want to buy them. And once in a while, an organisation decides it's time to felicitate him. He is least affected.