Still fighting, in a maze of law and usury

Up against a political shylock and wiping his tears and looking skywards for some divine intervention, Tukaram Kandalkar, farmer in Amaravati, Vidarbha, tells his lawyer with folded hands: Do anything, but save me from losing my land. Jaideep Hardikar reports.
15 July 2008 -

Varud, Amravati - Tukaram Kandalkar is fighting a lost legal battle at the fag end of his life. And much though he may remain optimistic, he knows hes set to become landless.

Land and life go hand in hand here in Vidarbha. As they do in other parts of the country. But for Kandalkar, land is life  if he loses land, he loses life as well. Wiping his tears and looking skywards for some divine intervention, he tells his new lawyer with folded hands: Do anything, but save me from losing my land. 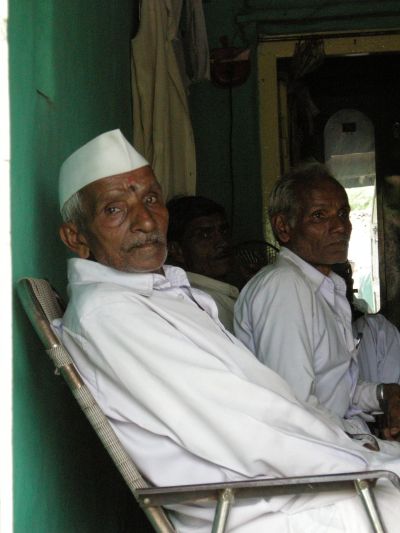 The septuagenarian illiterate farmer belonging to a backward Mali community is up against a political shylock, who invoked an old agreement to swindle his 13-acre well-irrigated land bearing orange orchard on four acres in Pusla village, 10 km from Varud in picturesque Shendurjana Ghat, called Vidarbhas California.

Ignorance cant certainly be an excuse, but for a man, who never saw a court in his life or doesnt know all the worldly ways of fighting legal battles, the last ten years have been traumatising, even as he treaded a legal path he hardly knew. A naïve Kandalkar is an epitome of exploited and indebted peasantry in Vidarbha.

I dont understand anything even today, but what to do? Kandalkar says of his tryst with judiciary. Hes remorseful of the fact that his ignorance has cost him the familys only avenue to sustenance and brought his grandchildren on road.

About 15 years ago, Kandalkar borrowed Rs.12,000 from a moneylender through a common acquaintance and signed an agreement to sale (which is a usual rule followed when a lender lends money to a farmer), a debt receipt, and an orange orchard receipt, which, in itself, were illegal on the part of the moneylender.

I paid Rs.18,000 to the lender in 1996, but he demanded more, Kandalkar says. When he failed to pay more, Sadashiv Sinkar, the 75-year-old lender, filed a suit for specific performance of the contract that Kandalkar had signed at the time of borrowing money. A civil court passed a decree in 1996 and asked Kandalkar to refund Rs.35,000 and additional Rs.45,000 towards damages, costs and interest to Sinkar.

Kandalkars land was attached in the execution proceedings initiated by the lender to recover the amount decreed by the court.

Importantly, the entire transaction was illegal in the first place. Sinkar was not a licensed lender. He was a usurer, apparently with a borrower-base in the area.

For six years, Kandalkar tried hard to fight back, but with no knowledge of law, he could not stop the auction of his attached land.

Kandalkars entire stretch of land was auctioned on 18 October 2002, for Rs.2.9 lakhs without his knowledge, this  to satisfy the lenders claim (which by then had shot up) of Rs 93,971. An acquaintance of Sinkars, Purushottam Ingle, an NCP leader and sitting member of Agriculture Produce Marketing Committee, Varud, purchased the land by depositing the money in the treasury immediately.

Sinkar died after the auction. So Ingle, who bought the land in the auction, became its natural claimant.

An aging Kandalkar went from one lawyer to another seeking legal recourse. He deposited Rs 1.9 lakh with the treasury in 2002, a day after the civil courts deadline ended. He could not have amassed the said amount in the stipulated time, the lender and auction-buyer knew, but when he did so with the intention of repaying the dues, they challenged him in the senior division civil court in Amravati. They won purely on the technical merit  that Kandalkar was late by a day. So his efforts went in vain.

Amidst continuing farm suicides, Vidarbhas agrarian crisis has rendered tens of gullible farmers like Kandalkar landless. Land sharks and moneylenders, hand in glove with local politicians, have swallowed acres and acres of fertile farmland by levying huge interest rates on paltry sums of loan extended to them.

In 2005 December winter session of state legislature, Gulabrao Gawande, the Shiv Sena MLA from Akot, tried to douse himself with kerosene on the floor of the assembly, but was prevented from doing so by his colleagues.

The government had later constituted district-level committees with district collector, superintendent of police and district registrar (land records) as members to look into usurious deals.

The committees could hardly do anything with the law unable to quash registered sale deeds.

Several legislators feel the government must enact fresh legislation and the high court should reopen the cases using its extra constitutional powers.

Gulabrao Gawande, the Shiv Sena MLA from Akot in Akola district, who has been fighting against usurers to return the land to farmers, feels a need for law to re-open cases where money-lenders have tacitly usurped the lands of debtors.

There are hundreds of such cases in Vidarbha, where the moneylenders have usurped land of their debtors even while they were repaid all their money. Gawande is fighting for at least 900 cases.

Possible appeal to the Supreme Court

Kandalkar is desperate, but hanging on to the last strand of hope. I cant give up this fight for my three grand children, he says with a heavy heart.

His son, Bhimrao, is mentally challenged and has three children: Devanand finished his HSC this year with 62 per cent marks; Mohan is studying in school and youngest Vaishali is a special child (she has Downs syndrome). Bhimraos wife Sunanda works as farm labourer in addition to working the family farm.

The civil court confirmed the sale of his land through auction in December 2002, over five and half years ago. He shouldve challenged the decision in High Court then, but he failed to do so.

Kandalkar though continues with possession of land. I am still cultivating it by investing from my income, he says. But our existence is hand-to-mouth.

Its only a matter of days before the Patwari, the revenue official, inks the name of buyer Ingle on his saat-bara (7/12), while Kandalkars name becomes history.

A stored byline for you was not found. You can press the BACK key and submit a fresh byline or go ahead and submit this story and we will contact you separately.