While jackfruit farmers across India lament the lack of fair compensation, one farmer in Thanjavur district of Tamil Nadu earns an income of two lakh rupees a year from his unique and succulent Maharajapuram variety. Shree Padre brings us his story.
06 May 2013 -

Thanjavur district of Tamilnadu has two Maharajapurams. One is well-known for its musicians. And now, the lesser known Maharajapuram is earning a name for something completely different - the unique jackfruit variety it has.

35 kilometers from Tiruchirappalli, the second Maharajapuram is very close to a petty town called Trikkattuppalli. Sundaram Sabesan (74), a banana farmer very active for his age, has named his famed jackfruit variety after his native hamlet, Maharajapuram.

Unfortunately, across our country, farmers don’t get a fair price for their jackfruits. An estimated 70 per cent of fruits go wasted without utilization. Among the rest, in whatever is marketed, the middleman enjoys a very thick slice, leaving the farmer with only chicken-feed. 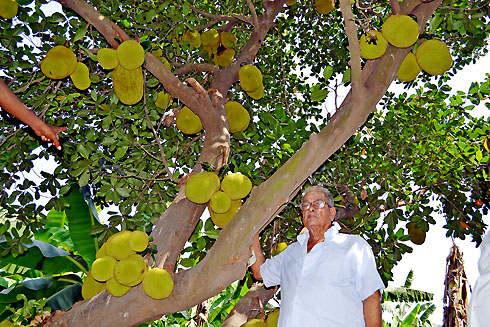 Sundaram Sabesan stands beside one of his jackfruit trees. Pic: Shree Padre

Today imported apples sell well at over Rupees 10 each, even in the smallest of towns. But a huge jackfruit, that can well fill the belly of three families, doesn’t even bring that much for thousands of jackfruit farmers in remote villages around the country.

It is in this context that the Maharajapuram jackfruit story deserves an audience. Sundaram’s twenty trees bring him a handsome income of two lakh rupees per annum. This figure would be unbelievable for most of the jackfruit farmers of our country!

The “mother” tree of Sundaram’s jackfruit variety belonged to Thoppukulam Subramanian Ayyar, whose house is in the next street to his. Recalls Sundaram, “Five decades ago, I remember Ayyar selling each bulb of that fruit for fifty paisa.” An impressed Sundaram raised a seedling of that tree that fortunately gave true-to-type fruits later. That mother tree is long dead now.

Sundaram has not kept detailed accounts of his jackfruits. Says he: Broadly speaking, I get around Rupees 10,000 from each tree. However, his heavy bearing trees should be bringing in not less than double this income.

•  Dried banana bits are a hit
•  No ordinary farm

This tree, Sundaram’s mother tree, is now 65 years old. He got it grafted and had the young ones planted on the edges of his banana fields. The younger trees are now around two decades old. Some of them yield profusely and in bunches.

The carpels are thick and light yellow in colour. Flavour and sweetness is medium. In all, the fruit has a unique and pleasant taste that is acceptable for most people. The ‘fill’  referring to the percentage of edible fruit portion in the total mass  is also good. “The taste of Maharajapuram variety jackfruit is something very unique and pleasing. Once you eat its spongy carpels, you feel like eating more and more,” explains V. Palaniyappan, retired Joint Director of Agriculture, Thanjavur, who visits Sundaram’s farm very often.

Sundaram sells his fruits to a wholesaler at nearby Thrikkattupalli town. He, in turn, sells it to vendors for a commission. As Thanjavur district has very limited jackfruit production and locals are fond of ‘pala palam’ (jackfruit), the fruits command good price. Sundaram gets anything from Rs 200 to 250 for a fruit as these are quite big in size.

Marketing starts in December. By general standards, jackfruit available in December is considered as early season variety. The Maharajapuram variety continues to yield till July and August. “This means,” Sundaram points out, “we don’t have fruits for only three months a year, that is, during September, October and November.” In fact, these trees appear to be of the twice-yielding kind (bearing fruit two times a year).

Sundaram runs a fertilizer shop too, but so far he hasn’t fed fertilizers to his trees. However, since he has been manuring and irrigating the banana trees, the jack trees would have absorbed both fertilizers and water from the surroundings. As such, the same jackfruit tree, planted in a dry area without irrigation would give still sweeter fruits. 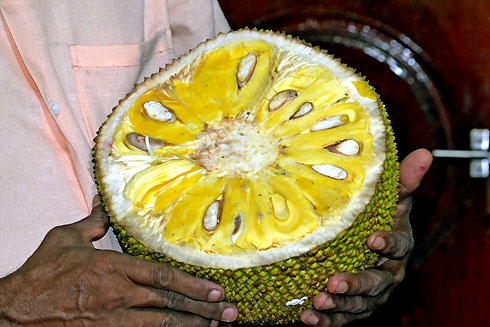 Sundaram’s mother tree has lost its vigor due to heavy pruning and pest attack. He maintains that all the plants are grafts from this mother tree. However, instead of uniform type, the younger progeny, in fact, gives two types of fruits - round and elongated.

The round type comprises very big fruits  its bulbs weigh 110 grams on an average. This type bears very profusely. On an average, it gives 100 to 150 fruits. Another interesting character of this heavy bearing type is that it bears in bunches. The lower portion of the stem itself will have a few fruits that anyone can harvest without climbing the tree. Added to this, it gives a few fruits just on the ground. To protect it from pests or insect attack, Sundaram spreads plastic sheets between the fruits and the floor.

The above characters are also found in another famous Tamilnadu variety of Jackfruit  Palur-1, a selection released by Palur Vegetable Research Station of Tamil Nadu Agriculture University (TNAU). Palur -1 is also twice-bearing and bears fruits on the ground as well as at a man’s reach from the bottom.

The second type of Sundaram’s fruits is slightly elongated. Its bulb weight is a little less. The productivity is also less. This gives around hundred fruits a year. One explanation for the difference in character and fruit shape is that in some grafted plants, the top portion (scion) might have died and the root-stock might have sprouted into a tree.

Sundaram has not kept detailed accounts of his jackfruits. Says he, “Broadly speaking, I get around Rupees 10,000 from each tree.” However, his heavy bearing trees should be bringing in not less than double this income. 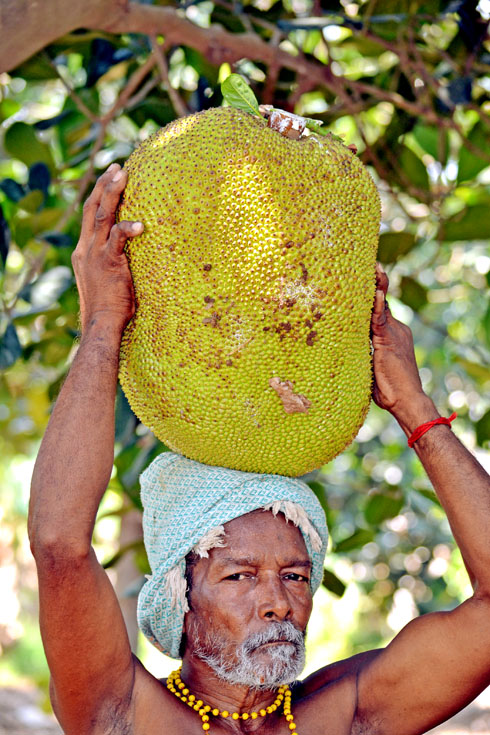 Surprisingly, in this belt, approach graft is being practiced still. Approach graft turns out to be very cumbersome because to maintain the grafted plants one has to go near the mother tree and climb it many a time to irrigate. In softwood grafting, scions from the mother tree are cut, taken to the site and grafted to root-stocks and maintained in greenhouses, if need be.

A local grafting expert, Swaminathan, staff at Aduthurai Agriculture Farm has produced some grafts of Sundaram jack trees. These will be available in the farm till the stocks finish. In addition, a nearby private nursery also claims to have grafts of this Maharajapuram variety.

Though Sundaram’s young jack trees look quite healthy, thanks to the ample moisture and nutrition available to them, he loses a considerable number of fruits every year due to fruit-borer menace. Sundaram is looking forward to some non-chemical ways of solving the fruit-borer problem.

‘Thinning’ would be beneficial

P. Haridoss, former Assistant Director of Horticulture, Kammapuram, who was in our team during the visit strongly suggests Sundaram to follow ‘thinning’ from next year. Thinning is a simple but very useful agronomic practice religiously followed by all jackfruit farmers at Panruti.

Instead of allowing all tender jackfruits to grow, once the pollination is over- say when the tender fruit attains the size of a medium-sized cucumber - excessive fruits are cut with a sickle. Each peduncle (stalk) is permitted to have only one fruit. The weak and shapeless fruits are also removed. Panruti farmers have a thumb-rule regarding the number of tender jackfruits to be retained after thinning. If the vegetative growth is good, two fruits per age of the tree are allowed. This means, twenty-four fruits in a tree of twelve years.

Thinning has many benefits. First and foremost, the carpel size, thickness and even the taste increases. The size of the fruit is also enhanced. As many of the pests attack the overlapping areas between two jackfruits, thinning reduces the damage from such pests by reducing or eliminating the vulnerable overlapping area.

Says Anilkumar Balanja, a jackfruit lover of Dakshina Kannada district, from where the now- famous ‘Gum-less Jackfruit’ (latex less) variety has evolved, “this Maharajapuram fruit, when eaten reminds me very strongly about the gum-less variety”.