This B-school's 96-acre campus occupies two steep hillocks. There is no independent water source for the entire institute and the average daily water consumption exceeds one lakh litres. The absence of pre-monsoon showers in mid-Kerala is causing worry elsewhere, but IIM-Kozhikode shows no signs of anxiety. Shree Padre finds out why.
08 June 2005 -

Pre-monsoon showers are conspicuous by their absence in mid-Kerala this year. It is the end of May. Newspapers and TV channels are full of tales of water scarcity. Yet, there are no signs of anxiety at the Indian Institute of Management (IIM), Kozhikode, Kerala. The reason: they have been successfully harvesting rain in a big way since the beginning of the institute three years ago.

The 96-acre campus occupies two steep hillocks. There is no independent water source of its own that can provide water to the whole institute. Barring the floating population, it has 350-400 inmates. The average daily water consumption exceeds one lakh litres. Irrigation requirement for the lawn, garden & horticultural crops is not included in this. The IIM was functioning in leased premises for 2-3 years. Construction began in 2000 and in 2003, the institute shifted to the current campus. 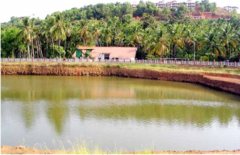 The large pond that stores rainwater for the campus. Pic: Harish Halemane.

This IIM is probably the only government institution in the state that has gone for RWH in such a big scale. Though it can't boast of zero-run-off, by eye-estimation it catches rain from at least two thirds of its whole campus. (The topography is such that some portion of the water has to go from the back portion of 2 hillocks, but a major portion of run-off gets down to the front side.) Unlike many other institutions in Kerala who despite having big land holdings and 300 plus cms of rain (that means 1.2 crore litres in an acre) have to depend on external water supply, IIM is self-sufficient. (1 crore = 10 million)

At the foot of the hillock, there is a huge pond of 1.5 acres dug only to catch rain water. No doubt, there was already a water source at this spot, but it was weak one and would dry up by February. This is where the arrangement becomes noticeworthy. The run-off from the upper parts of the hill is not directly fed into the main pond. It is spread in an adjoining piece of land, about five acres in extent. This is the catchment area; it has an arecanut garden and a thick layer of weed wines covering the ground. An old pond inside this garden is maintained as it is. This pond accelerates the rate of water percolation.

A major part of the rainwater that is centralized here in the catchment subsequently reaches the main pond by way of percolation. To increase the opportunity time for rainwater to percolate, small earthen projections come out around the catchment. The projections are hump-like structures to ensure water remains in the pond instead of over-flowing sooner.

Still, when water from 50 plus acres flows downhill, you cannot catch all of it in such a small area. The excess water overflowing from the arecanut garden goes away through a cement canal. The canal also ensures that the slightly tainted run-off does not get into the main pond.

The catchment area. Rainwater from over 50 acres comes collects here and percolates from near this pond and the areca garden around it to the main pond. Pic: Harish Halemane.

Water from the main pond is treated and pumped to an overhead tank at the hilltop using a massive pumpset. From here, it is distributed to the necessary domestic use, including drinking, at the institution and staff quarters. Since the administration had planned it at an early stage, all the buildings in the campus are fitted with built-in cement gutters. The down pipes have a box-like cement structure in between. This is to stop the leaves that might travel along with the run-off from the roof.

One can understand a private or a non-government organization having far-sighted vision. But how was it that a government institution went for a sustainable, but unusual water supply system? Was there somebody who dreamt of this system?

"It was a sort of team work and collective thinking. Our then director, Dr Kalro was a man open to new ideas. We didn't have scope to get more water from any other way. So, after many rounds of thread-bare discussions, we decided on this option, recalls Rajiv Varma, Civil Engineer of IIM. Professor Amoral H Kalro retied in March 2004. The present director is Professor Krishnakumar.

The major challenge was the steepness of the hillocks and the resultant threat of erosion. The hillocks are about 80 meters height from below. All the buildings including the staff quarters are at the hilltop. Freshly constructed roads were prone for severe soil erosion. Soil diverted from the roads to the nearby slopes would have further added to the problem.

The building team marked the contour lines of the hills and retained some of the older gullies that acted as storm-water drains. (They were formed as a result of run-off.) A few drains were constructed afresh. From the top area, upto a distance, the canals were lined with cement. However, the major problem area was still below. Here, deep gullies were formed earlier. Brushwood dams were erected at regular intervals. On both sides of the drain, a grass variety such as cynodon was planted. After a year, though the dams have almost washed off, the vegetative growth has established. This cuts the velocity of water to some extent.

In many other areas, the slopes were prone to erosion. An altogether new idea was tried to stabilise this. Use of coconut geo-textiles (GT) supplied by the Coir Board. A geo-textile is a woven fabric capable of passing water but able to hold back soil. It looks like a thick mat and is of the colour of wood. After preparing the land surface, the GT was spread over the land. Seeds of Congo-signal grass were either broadcast or were dibbled through the GT. Today, you don't see any traces of the textile anywhere. But the grass remains as a thick vegetative cover. (In a couple of seasons, the GT decays and mixes with soil. By that time, grass covers the area thickly. No soil is put over the geo-textile (GT) when it is initially spread.)

The IIM-K is situated in conditions that call for exhaustive erosion control measures to make water conservation meaningful. If more and more soil gets deposited in the catchment, it would reduce percolation, pose more problems and call for recurring work.  •  Rain barrels catalyse harvesting
•  Rain or no rain, water for Coke
•  Plenty on the roof

Altogether, 35,000 square meters of geo-textile was laid here. Many visitors come here to see how this method has worked.

As a result of all these efforts, the soil erosion is controlled very effectively. But there is a recurring problem. The Congo-signal grass isn't drought resistant. It has to be irrigated once in a fortnight in summer. To avoid any fire accident, it is pruned and the cuttings are used for mulching.

Perhaps Vetiver would have been a far better candidate for such a situation. It has to be planted in the rainy season itself, but it does not require irrigation. Though it might look drier in summer, with a little shower it attains new growth. The use of geo-textiles could also have been reduced or done away with.

The capacity of the water pond is 30,000 cubic meters. (This is 30 million litres; one cubic meter is 1,000 litres.) The whole system cost the institute 80 lakh rupees. Except this capital cost, other expenditures are not considerable. Construction cost of gutters, since it is done along with other works, is not additional. (10 lakh = 1 million)

Soil conservation has to go along with water conservation. Also, if more and more soil gets deposited in the catchment, it would reduce percolation and pose more problems & recurring work. Very few campuses situated in such conditions might have implemented such exhaustive erosion control measures.

The institute also has sewage water treatment. When the campus strength is full, they get 50,000 litres of output from sewage. Treated water is utilized for irrigation. The population of the campus will go beyond 500 in near future. The daily requirement is expected to go up to 2 lakh litres per day, points out Rajiv Varma. He says that they might have to construct an additional pond to catch more rain.

Given the level of interest and knowledge of RWH in government institutions, this IIM's achievement is really laudable. It is a model for other educational institutions and corporate houses.

To make their painstaking efforts more effective and widespread, IIM can do better by following two suggestions. One: The institute has about 20,000 square metres of roof area. Every year, they can get at least 50,000 cu.metres of water from the roofs. Some water tanks kept at a height from ground (inside or near the buildings) can provide water for drinking and cooking. This can be made available by gravity-flow, saving a considerable amount of power and efforts to purify the pond water. Though proper filtering is necessary, it is easier and doesn't require recurring expenditure. Sub-surface tanks at the hilltop can provide non-potable water for washing & flushing at least during monsoon. Pumps of far lesser capacity would be suffice to lift water at this level.