To deliver on health, understand it first

Medical services are today driven by needs and definitions out of sync with the realities of the masses. In conversation with Pamela Philipose, health activist Imrana Qadeer argues why health should be seen through the prism of the various structural components of society - caste, class and gender.
30 September 2013 -

There are two ways to understand health. One is the technical bio-medical approach, wherein standards are set and outcomes measured. The other is a social approach, where what is taken into account is the manner in which the subjects themselves understand their own health, leading to a more collective perception of health.

The tragedy of the World Health Organization (WHO) definition of health is that it is so broad and general that it becomes impractical. Health is seen as the 'absence of disease'. In fact, there can never be such an 'absence'. Not only can there never be such an absence, the presence of diseases can be very different among different classes. If we were to understand health as a collective phenomenon within a public health perspective, then we would bring in other social determinants.

In other words, I would argue, that a definition of health has to be dynamic and multi-layered. Health has to be seen through the prism of the various structural components of society, whether it is caste, class, gender, and so on. To me this is the crux of the issue. Take mortality levels, for instance. If you compare reproductive mortalities with those related to communicable diseases, you will find that the latter have a much higher load, even among women, when compared to reproductive diseases. In fact, reproductive mortality among women makes for about two per cent of deaths.

In other words, the personal circumstances of women and their social backgrounds account for a much higher percentage of deaths among women. Women's health is clearly much more than their reproductive health. Yet, in India today, we perceive fertility control as still the most critical aspect of our health delivery services. From maternal and child health we have moved to reproductive health, and reproductive health has taken over the National Rural Health Mission (NRHM), which was initially envisaged as approaching health in its totality.

The notion of health for those who have the privilege of having all these aspects of life looked after, is "not having to go to the doctor." But the idea of health for poor women is very different. It is about whether they have shelter, whether they have tomorrow's meal, whether their children go to school. That is why it is so crucial for us to understand all the many social aspects that comprise health.

Everywhere women are carrying the double burden, and this gets reflected in health care as well. Since the existence of the household depends on her, a woman will not say that she is unwell until it becomes physically impossible for her to perform. This is partly the result of socialisation. Even when she does speak, the family has other things to do and their responses are invariably delayed and then she is taken to a place that is badly run. So we see the multiplier effect of her secondary status. Girls are similarly impacted. I once came across a two-month-old baby crying incessantly, and I asked her grandmother why this was the case. The woman just laughed and said, "Let her get used to it."

These are social issues but it is also a health issue. It is similar when it comes to malnutrition. We are socially producing malnutrition by adopting certain agricultural policies, undermining the public distribution system, paying poor wages and, when people, including children, suffer from malnutrition, we put tubes into them and say that the family has not been eating right! 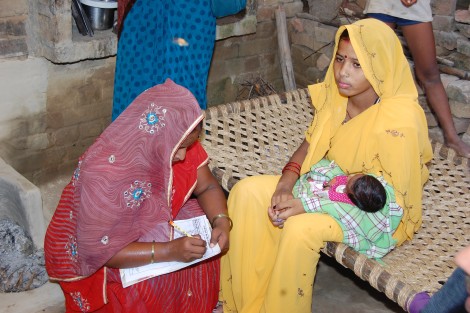 An ASHA worker fills up forms during a home visit in Dhanipur block in Aligarh (Credit: Narendra\WFS)

Many hundreds of thousands of women in the country are dissatisfied with the health services they are getting. We have been told that because of the Janani Suraksha Yojana there is data to prove that more institutional deliveries are taking place than earlier. However, has anyone analysed these figures to find out whether maternal mortality and infant mortality have indeed come down as a consequence? Data of this kind never emerge. At the same time, there are innumerable case studies to show that women are receiving such poor treatment in these institutions that they are discouraged from going back to them.

What then is the point of access to such services? If the services are good, they will come, if not they will choose a local dai (midwife) to assist them in the delivery at home next time. They are supposed to get cash for accessing these services. That cash, however, comes after the baby is delivered so it doesn't go into the nutrition of the mother or into ante-natal care, but into transportation and the bribes they sometimes have to pay to get the payments due to them. This shows that cash transfers cannot resolve the problem of women's health.

Our medical establishment has shifted from being a service within welfare planning to an instrument of revenue creation. This is what the corporatisation of medical services has meant. It is against this background that surrogacy, for instance, has emerged as a big, money-minting project . not because it necessarily meets an epidemiological need but because the upper middle class and the international community desire such a service.

If you surf the Net you will be amazed to see how clinics in India are being advertised. There is information about how the service seeker can get "fair" surrogates, "educated" surrogates. For national users, caste is a factor that is highlighted. In fact, every obscurantist, gender-biased requirement is being catered to in the surrogacy market. I am not against surrogacy, per se . everyone who wants a baby has the right to use the available technology to get one . but it is the commercialisation of surrogacy and the exploitation of surrogate mothers that is the problem.

Also, when we ask ourselves what kind of health services the country needs on the basis of epidemiological priorities, surrogacy services do not figure high on that list. Most infertility is secondary and therefore, preventable, if women get access to good primary health care.

Surrogacy, in many ways, reflects the new direction of health delivery in India. Health services no longer respond to what we, in public health, term as "epidemiological needs" . that is, the objective requirements of the community, whatever they may be, whether they are diarrhoea, communicable and non-communicable diseases, or malnutrition. Instead, these days planning for health means asking for, and putting into place, services that are designed to bring in the maximum revenue. (Women's Feature Service)