In Harud, autumn is not just the season it stands for. It is a metaphor for a state caught in a situation of persistent siege, bomb blasts, and killings. Shoma Chatterji reviews the film.
24 December 2010 -

Harud (Autumn) is the debut feature film of Kashmiri actor Aamir Bashir. He tells the story of Rafiq, a young man who tries to cope with the loss of his older brother Tauqir. He tries to persuade his grieving mother to accept the reality of the tragedy but finds himself groping with the ambivalence of the violence around him and around the lives of people in Kashmir in general and Srinagar in particular.

While going through his brother's things in a cupboard, Rafiq discovers a Pentax camera with a roll of undeveloped film. He develops the roll to discover snaps of his brother, his girlfriend and other snippets of a happier past that offers him a ray of hope of capturing life through his perspective as seen through the lens of the camera. The film, a fictionalised version of real life, throws up a realistic glimpse of the Kashmiri people's struggle, where thousands of young men have died or disappeared since the onset of the insurgency in occupied Kashmir.

Asked what motivated him to make such a disturbing and thought-provoking first film, Bashir says, "the handful of films on Kashmir that have been made after the insurgency in 1989 were told from an outsider's point of view, part of a colonial discourse where there were good, peace-loving Kashmiris polarised from some black sheep who had gone astray. The films played out the typical mainstream formula of good-versus-evil, counterpointing the hero against the villain. My team and I decided on an insider's perspective instead. Maybe, this is contrary to the mode followed by mainstream cinema but once the decision was made, we stuck to it. The 55-page screenplay took three to four long years to settle down, and the entire process of making the film was a distillation of the Kashmiri experience in the last two decades."

The film opens with raw footage of an Indian military operation in Kashmir. "The idea behind the news footage was to familiarise the audience with images they might have seen on television or on the news, and then go behind the scenes to things that you would never see in the news. Autumn in Kashmir is the precursor to a dark, cold winter. Unlike in the developed world where it is a season of beauty, in Kashmir it is the season in which you start preparing for the harsh winter ahead. Fallen Chinar leaves are burnt to make charcoal which is used to light the fire pots that people carry around to keep themselves warm."

"There is a Kashmiri expression, harduk zazur, which means autumnal decay. It is a season associated with decay and slow death. In the film it is the metaphor for the psychological decay caused by years of violence in Kashmir," says Bashir. 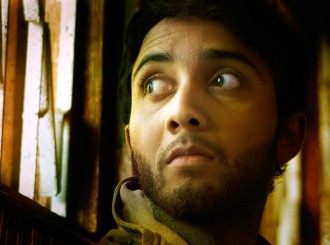 "The handful of films on Kashmir that have been made after the insurgency in 1989 were told from an outsider's point of view; My team and I decided on an insider's perspective instead." (Above: A still from the film).

Since the film is shot entirely on location in Srinagar and deals with a very sensitive and volatile issue, Harud has the air of an investigative documentary. But the characters create a simple story of a people trying to rise above a state of pervasive fear and anxiety, consistent and scarred by stress, strain, poverty, censorship and exploitation. There is very little dialogue, enhanced by a look here, the barbed wire omnipresent on the screen in circles, in spirals, in crosses and in rows, underscoring limitations of mobility and space.

You see middle-aged men like Bashir's father waiting for the doctor outside his chamber in a mental hospital, rows of silent protestors gathered under big banners put up by the Association of Parents of Displaced Persons of Kashmir, and last, but not the least, the changing expression on Rafiq's unsmiling, disturbed face when he finds his missing brother's Pentax camera! Till he finds the camera, Rafiq (Shahnawaz Bhat)'s face is expressionless and deadpan, even when his friends laugh and joke and try to include him in their jokes. The few words he speaks are delivered without tone or pitch. But once the camera is in his hands, the face comes alive, very subtly, but it does.

The film speaks more through its ominous silences and carefully structured sound design than through words. Local musical instruments such as the oud can sometime be heard on the soundtrack along with the viola. The silence is dotted with ambient sounds - screeching tires of moving buses that sound very much like sounds of ammunition being fired, the soft whimpering of a tiny child, the sound of a bomb exploding in a street kabab shop, the clicking of Rafiq's camera.

Rafiq's ambitious friend who goes to Delhi to take part in a reality show provides relief in the bizarre reality. The exploitation of the past where an important person tries to make a fast buck by trying to pawn off a picture of "Azad" Kashmir clicked in 1947. Photographers with their video cams and satellite news journalists try to extract newsbytes out of the collective tragedy of an oppressed people. As the film moves along spreading its message of fear, one realises that the chinar leaf has outlived its presence in the film which makes its own statement.

"The entry of mobile phones in Kashmir in 2003 triggered the desire of portraying the insecurity the people are living under. I wished to explore how this has had a telling effect on the psyche of the Kashmiri people resulting from violence of around 20 years," says Bashir. "I am a Kashmiri myself and am a first account witness of the transition of Kashmir from my boyhood days. I do not find Kashmir very truthful today. The idealistic Kashmir existed only in my boyhood. I have tried to look at Srinagar through a social perspective rather than through a political one," he says.

Harud (Autumn) marks an emotional journey back to his homeland, Kashmir, to discover how the place he grew in had changed and how the constant state of volatile political environment has impacted on the lives of its people reduced either to a refugee-like existence or to living like criminals on home soil. Rafiq is caught by his traffic constable father while trying to cross the border over to Pakistan with his friends to join the militants, and is brought back home. The whole area is under constant surveillance of heavily armed Indian soldiers. Rafiq's mother attends rallies regularly organised by APDP (Association of Parents of Disappeared Persons). His father sinks into post traumatic stress disorder resulting from the violence he witnesses in the course of his duty.

Rafiq sleepwalks through the day with his friends dreaming about escaping from Kashmir. He unwillingly takes up the job of a newspaper boy. The news of cell phones arriving in town that provides initial excitement among the locals, turns into a media hyped, money-generating sound byte for television channels at home and beyond.

Bashir adds that the crew did not have to face any gun battles through the shoot, except on the last day when they were filming a protest march in Srinagar that made matters tense and the police blamed them for everything that happened. The crew managed to come out unscathed. But the situation took a turn for the worse with protests and shut downs for days on end as soon as they had wrapped up shooting in Srinagar.

The film is shot through two cameras - the movie camera that shot the film and Rafiq's still camera through which he captures snippets of life, events and people without caption, narrating their story from his perspective. The movie camera follows Rafique in his aimless wanderings, reluctantly distributing newspapers, loafing around with friends but not speaking much, using his boss' camera at his new job clandestinely to click pictures, etc. The still camera offers a glimpse of the world through Rafiq's eyes. The images emerging from both are hardly different except the last shot of Rafiq lying on a pool of blood, the soundtrack filled with moans of his grieving mother.

In Harud, autumn is not just the season it stands for. It is a metaphor for a state caught in a situation of persistent siege, bomb blasts, and killings and of young men walking across the wire fencing that divides India from Pakistan to become militants. It stands for an eternal, never-ending time and space within which the people of Kashmir are trapped in. It is a no-exit situation where you die if you are a militant, you die if you are not, and those who live, do not know about their dearest ones lost on the horizon. The falling leaf of a saffron colour Chinar tree is a repeated metaphor. It is as if the russet and the red and the crimson of the chinar leaves have spilled over on to the lives of these innocents, seen through blood, death and loss.

"I wished to show my characters seeking some semblance of dignity in their lives even within an ambience of ceaseless assaults. I did not wish to make the audience feel sorry for the Kashmiris. I, as a Kashmiri and a storyteller, felt responsible to give them the space where they could find the dignity that seems elusive to them," Bashir sums up.